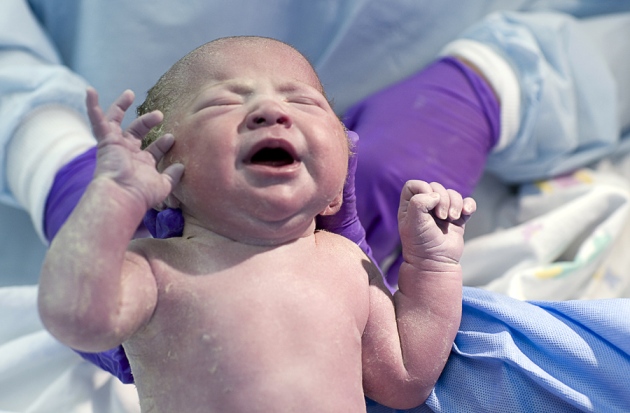 Infants' immune systems are suppressed while microbes colonize their bodies.

As any new parent knows, infants are notoriously susceptible to bacterial infections. A study now suggests that the body engineers this vulnerability deliberately, allowing beneficial microbes to colonize the baby’s gut, skin, mouth and lungs. Learning to manipulate this system could lead to treatments for infections in newborns, and perhaps even improve the way babies are vaccinated.

In the womb, a fetus is sterile. But from the moment that a baby travels down the birth canal, bacteria and fungi begin their colonization. How the immune system tolerates this sudden influx of invaders has been a mystery.

To investigate, Sing Sing Way, an infectious-disease paediatrician at Cincinnati Children’s Hospital in Ohio, and his colleagues compared the immune cells in six-day-old mice with those in adult mice. The baby mice had a much higher proportion of red blood cells expressing a protein called CD71. The researchers found that such cells suppress the immune response by making an enzyme called arginase.

Way and his colleagues gave baby mice antibodies that caused the immune system to destroy CD71+ cells and remove them from the animals’ blood. When these mice were infected with the bacterium Listeria monocytogenes, which can cause severe infections in newborn humans, the animals’ immune systems successfully fended off the attack. But there was a consequence: without CD71+ cells, the mice's intestinal cells became inflamed when they encountered normal intestinal bacteria.

Ofer Levy, a paediatrician at Boston Children’s Hospital in Massachusetts, says that reducing inflammation must be the body’s main logic for initially suppressing immunity. “If there were no mechanisms to dampen inflammation, the newborn would fall apart,” says Levy. Way and his colleagues, who published their findings today in Nature1, found that blood from a human umbilical cord also contained a higher number of these CD71+ cells than adult blood.

“It’s very convincing,” says Levy, although he warns that further evidence needs to be gathered in humans before the discovery can be used in medicine. And the body's microbial ecosystem is intertwined with its immune system, so it could be difficult to alter one without disrupting the other, he says. “The newborn is built this way for a reason.”

Way's group is now trying to find ways to tweak this system to improve treatment of diseases in newborn babies. For instance, babies born prematurely are sometimes affected by a condition called necrotizing enterocolitis, in which their intestines fall apart. One contributing factor could be that they do not have the bacteria that will allow them to digest food. Way hypothesizes that these premature infants may not yet have active CD71+ cells, and that somehow introducing these cells or using a drug to turn them on could suppress the immune system long enough for beneficial bacteria to colonize the intestines.

Furthermore, Way adds, babies are not normally vaccinated until months after they are born, because their immune systems are too weak. But in developing countries, infants often receive medical care only immediately after birth, so many will never receive vaccinations. Finding a way to strengthen their immune systems by temporarily reducing the number of CD71+ cells, for instance, might allow health workers to vaccinate infants immediately.