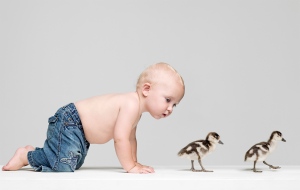 Researchers have found similar patterns in the ways human babies and songbirds learn their vocalizations.

Babies learn to babble before they learn to talk, at first simply repeating individual syllables (as in ba-ba-ba), and later stringing various syllables together (as in ba-da-goo). Songbirds exhibit similar patterns during song-learning, and the capacity for this sort of syllable sequencing is widely believed to be innate and to emerge full-blown — a theory that is challenged by a paper published on Nature's website today1. A study of three species — zebra finches, Bengalese finches and humans — reports that none of the trio has it that easy. Their young all have to learn how to string syllables together slowly, pair by pair.

The researchers began by training young zebra finches (Taeniopygia guttata) to sing a song in which three syllables represented by the letters A, B and C came in the order ABC–ABC. They then trained the birds to sing a second song in which the same syllables were strung together in a different order, ACB–ACB.

Eight out of seventeen birds managed to learn the second song, but they did not do so in one fell swoop. They learned it as a series of syllable pairs, first, say, learning to go from A to C, then from C to B and finally from B to A. And they didn’t do it overnight, as the innate-sequencing theory predicts. Instead, on average, they learned the first pair in about ten days, the second in four days and the third in two days.

The researchers found evidence of similar learning patterns in untrained Bengalese finches (Lonchura striata domestica). For instance, in this bird's songs, some syllable pairs are reversible — sometimes syllable A comes before syllable B and vice versa. Again, the innate-sequencing theory predicts that young birds should acquire both orders at the same time, but they do not. When the scientists tracked the development of seven such pairs, they found that the birds acquired the two orders an average of about 18 days apart.

Perhaps most surprisingly, the study found evidence that human babies follow a similar learning pattern. When the researchers analysed databases of vocal recordings from nine infants, they found that their well-known babbling progression — from repeating the same syllable to stringing different syllables together — did not happen quickly, but occurred gradually, over a period of 20–30 weeks.

“The study provides beautiful evidence of stepwise transitions in songbirds, as well as analyses that are suggestive of the same phenomenon in human infants,” says Michael Frank, a language-acquisition researcher at Stanford University in California. But he cautions that the hypothesis for babies should be tested experimentally.

Michael Goldstein, a psychologist who heads a bird and baby lab at Cornell University in Ithaca, New York, questions whether the learning patterns exhibited by the finches can even be generalized across the species' tuneful relatives. “There’s no such thing as a generic songbird,” he says. He also points out that the study used only small sample sizes.

But Goldstein is also heartened by the study’s cross-species comparisons. “A lot of people talk about the parallels between birds and babies,” he says, “but very few actually study them. It’s good that they’ve done this.”