A Hungarian team has created the first drones that can fly as a coordinated flock. The researchers watched as the ten autonomous robots took to the air in a field outside Budapest, zipping through the open sky, flying in formation or even following a leader, all without any central control.

The aircraft, called quadcopters because they have four rotors, navigate using signals from Global Positioning System (GPS) receivers, communicate their positions to one another via radio and compute their own flight plans. They were created by a team of scientists led by Tamás Vicsek, a physicist at Eötvös Loránd University in Budapest.

“This is remarkable work,” says Iain Couzin, who studies collective animal behaviour at Princeton University in New Jersey. “It is the first outdoor demonstration of how biologically inspired rules can be used to create resilient yet dynamic flocks. [It suggests] we will be able to achieve large, coordinated robot flocks much sooner than many would have anticipated.”

Drones are typically designed to fly alone, and although other research groups have created flocks before, Vicsek says that those attempts involved cutting some corners — the copters were restricted to indoor arenas or controlled by a central computer.

According to Vicsek, the only other truly autonomous drone flock was created in 2011 by robotics researcher Dario Floreano at the Swiss Federal Institute of Technology in Lausanne1. But his machines were fixed-wing fliers that could move only at constant speeds and had to fly at different heights to avoid collisions. “It looked like a swarm but wasn’t a real one because they didn’t interact with one another,” says Vicsek. By contrast, his drones can coordinate their movements to form rotating rings or straight lines. If Vicsek tells them that they face a wall with a gap in it, they can queue up to squeeze through.

Vicsek and his team drew inspiration from a computer program called Boids, created in 1986 by Craig Reynolds, a computer graphics expert now at the University of California in Santa Cruz. Reynolds simulated virtual flying objects that move according to three rules — they match the average direction of their neighbours and move towards them, but keep a distance to avoid crowding.

These rules — alignment, attraction, repulsion — were enough to produce a computer simulation of a bird-like flock, but real fliers face other problems. “The big enemies are noise and delay,” says Vicsek. The GPS (Global Positioning System) signals are very noisy, so it is hard for the copters to accurately discern their position. The fliers also need time to receive and process those signals, and these lags mean the drones often get too close to one another or overshoot their mark. 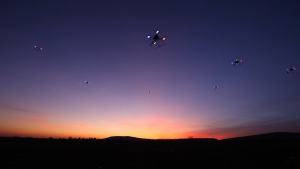 The drones flocking at dusk.

The drones did not flock successfully until the team managed to speed up their reaction times — a challenge that Floreano and his team also had to overcome. Vicsek and his team submitted their results as a presentation at the International Conference on Intelligent Robots and Systems, to be held next September in Chicago, Illinois.

For now, the drones communicate among themselves via radio, but that sometimes leads to jammed signals. Fitting them with cameras might provide a workaround. “It’s not by chance that birds have very good vision,” says Vicsek. “The big next step is to make the copters see each other.”