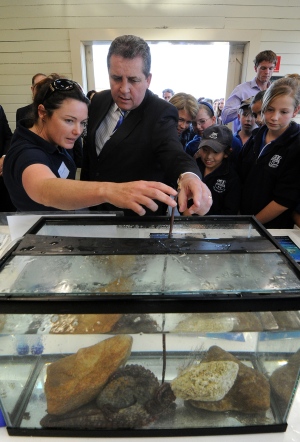 Australia’s research grants have been left untouched in mid-year spending adjustments aimed at maintaining a budget surplus. But scientists are not entirely happy with the figures announced today: over the next four years, the government has removed some A$499 million (US$515 million) from funds that help universities meet the overhead costs of research, such as equipment and infrastructure.

The cuts have come to the Sustainable Research Excellence (SRE) initiative, a scheme announced by the Australian Government in its 2009-2010 budget to cover the indirect costs of university research supported by Australian competitive grants. Figures announced today by treasurer Wayne Swan would freeze SRE spending from 2012 to 2013. That is equivalent to trimming A$79 million, a 40% cut, from the government’s previous SRE spending plans in the 2012-13 financial year. In subsequent years, the SRE budget grows to A$300 million by 2016, three years later than initially planned, which amounts to A$499 million savings over four years, according to government figures.

But the main source of government funds for scientific research, the Australian Research Council (ARC) and Cooperative Research Centres (CRCs), see budgets left alone, as science minister Chris Evans confirmed.  "Close to A$880 million in ARC Discovery and Linkage grants and A$154 million in CRC grants will support the research effort, ensuring continuity for ongoing projects as well as new investment in key scientific and research priorities,” he said.

The news was welcomed by Suzanne Cory, president of the Australian Academy of Science. “This is an investment in Australia’s long term prosperity and security,” she said. “The Academy is encouraged that the Gillard government has ensured many diverse and important areas of research will be allowed to continue.”

Cory said she was concerned that SRE funding would not reach planned levels for several years. “However, the Academy recognises that this is a time of significant fiscal pressure and is grateful that in this climate much of the research budget has been preserved,” she said.

Research-focused Australian universities (known as the ‘Group of Eight’, Go8), which will be hit hardest by the SRE budget cut, were more critical of the Government’s decision. “We are alarmed by its decision to erode the research fabric that enables top researchers to do excellent work efficiently,” Go8 chair Fred Hilmer said. “Given that universities had already included the SRE funding in their budgets, the cuts can be expected to result in research staff being laid off,” he added.