Staff from the Commonwealth Scientific and Industrial Research Organisation facility in Hobart, Australia, demonstrated on 26 June over funding cuts.

Joining together in vociferous chants of defiance, nearly a thousand scientists at Australia’s premier science agency protested across the country last week as it began to shed jobs in response to deep funding cuts.

The measures, announced in May’s budget, include a 16% cut in funds — a reduction of Aus$115 million (US$108 million) — for the Commonwealth Scientific and Industrial Research Organisation (CSIRO) over the next four years. The budget, which is pending passage by the Australian Senate, also includes closures and slashed funds at other scientific organizations. The move is one in a series of steps enacted by the new government, elected last September, that have heavily targeted climate and environmental science.

The CSIRO must now decide where the budget cuts will fall. But heads of divisions — from radio science to agriculture and health — are struggling to make the required cuts while safeguarding core priorities. The first of its employees to go are 28 researchers and 3 support staff at the organization’s Marine and Atmospheric Research division in Hobart and Aspendale.

The losses underscore concerns in the scientific community that the government does not support environmental and climate science. Michael Borgas, an air-quality scientist and acting secretary for the CSIRO’s staff association, says that one budget measure specifically targets climate science. It includes an Aus$20-million cut, about 69%, to the Australian Climate Change Science Program, of which the CSIRO was a major beneficiary. “Since the budget, there’s been real fear for the future of our world-class climate, marine and atmospheric research,” says Borgas. “Unfortunately, those fears appear to be justified.”

Overall, 420 of the CSIRO’s 5,500 workers could lose their jobs by June 2015, according to a memo sent to staff on 14 May — the day after the budget announcement — by agency chief Megan Clark. This comes on top of 300 jobs already cut last year. By the end of the four-year process, the agency could have 1,000 fewer staff than it had in 2013, and roughly 70% of those losses would be science positions.

Research at two of the four radio observatories run by the CSIRO will be hit. Lewis Ball, head of the CSIRO Astronomy and Space Science programme, confirms that the Mopra radio telescope, 450 kilometres northwest of Sydney, will close unless alternative funding can be found. “I still do not have a confirmed budget for 2014–15, but the tea leaves aren’t looking at all positive,” he says. 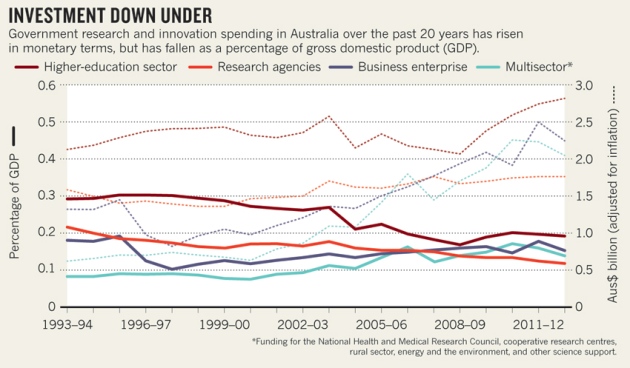 Southern Hemisphere tracking of NASA’s interplanetary missions from the Canberra Deep Space Communication Complex, will not be affected, however. And industry minister Ian Macfarlane, whose portfolio includes science, confirms that funds for Australia to co-host the Square Kilometre Array, the world’s largest radio telescope, are secure until 2017.

Macfarlane rejects claims that the government does not support science. He says that it is “investing strategically” in projects that will have long-term benefits for Australia. But Simon McKeon, chair of the CSIRO board, says that he is “disappointed” at the depth of the cuts and what he sees as ignorance of the long-term support that good research requires. Australia risks losing research capability, he warns.

Concerns are not just over the future of the CSIRO. Spending at four other government research agencies will also drop. One of these, the Australian Institute of Marine Science, will lose nearly Aus$7.8 million from the Aus$33.2 million it received last year. The Australian Research Council, which funds non-medical research, and several other research agencies will also take multimillion-dollar hits.

Environmental science is especially at risk, with about a dozen agencies set to be eliminated. But opposition in the Senate may yet save the Australian Renewable Energy Agency and the profitable Aus$10-billion Clean Energy Finance Corporation, established in 2012 to support start-up companies. The closures are in addition to Prime Minister Tony Abbott’s decision — just days after his election victory — to abolish the independent Climate Commission, a public-information body, and to draft legislation to dismantle the Climate Change Authority, which advises the government on issues such as cuts in emissions.

The government has bought in to climate-change denial — hook, line and sinker, says immunologist Peter Doherty, a Nobel laureate and fellow of the Australian Academy of Science. Medical research, however, has not been similarly savaged: in 2015, the government aims to set up a Aus$20-billion Medical Research Future Fund. But Doherty argues that the venture is poorly conceived because it will be paid for by patient levies and funds from health-care budgets. The government “is at best naive about how science works and, at worst, indifferent to — or even contemptuous of — science and scientists”, he says.

As many researchers look for new jobs and Australia’s science expenditure looks likely to drop below Aus$8.5 billion for the first time in five years (see ‘Investment down under’), the government’s chief scientist Ian Chubb warns that there is a “distinct possibility” that the nation will lose its position in international science. The problem is a lack of “a strategic vision for science”, says Chubb, who was not consulted about the budget. “Compared to the rest of the world, we’re an outlier. We risk being left behind.”