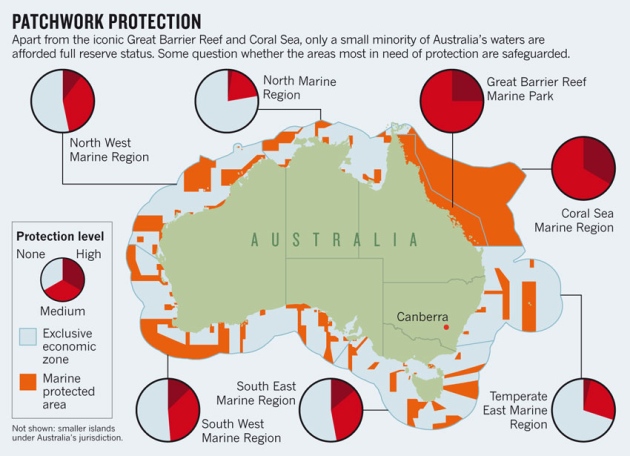 When Australia unveiled a groundbreaking network of marine reserves to gird the continent last year, praise rained down from conservationists. The plan, the most ambitious yet in the world, was seen as a secure, robust way to safeguard biodiversity, adding new protections for unique habitats such as the less-studied northern waters to existing ones for the iconic Great Barrier Reef.

But as scientists probe the details, they are finding worrying shortcomings, raising doubts about the rush to create similar marine protected areas elsewhere in the world.

Australia’s government will spend tens of millions of dollars on the programme. It will protect 2.3 million square kilometres of sea (see ‘Patchwork protection’) and try to balance leisure uses, commercial interests such as fishing and drilling, and conservation. The plans, put out for consultation last June, became official in November. Parliament is expected to approve the last step in the process shortly.

The government decided which activities should be allowed in which areas after examining scientific information on the habitat types and soliciting comments from local residents, industry representatives and conservationists. Its official guidelines said that the result should be “comprehensive, adequate and representative”, sustaining diversity while allowing tourism, shipping and resource extraction.

But an assessment of the scheme published late last month (L. M. Barr and H. P. Possing­ham Mar. Policy 42, 39–48; 2013) revealed flaws in the proposed network, which includes reserves in which all fishing is banned, as well as areas in which some fishing and other activities are permitted.

The authors of the assessment — Lissa Barr and Hugh Possingham of the University of Queensland’s Centre of Excellence in Environmental Decisions in Brisbane — looked at how representative the proposed areas are. Protecting the full range of ecosystems off the coasts of Australia is a “fundamental requirement” for a good reserve network, they say, or else habitats with distinct biology may be lost.

What they found was troubling. Except for the high-profile Great Barrier Reef and Coral Sea regions, the protected areas are “far from representative”, they wrote. Of the 85 “bio­regions” that the Australian government identified within its waters, 30 have the highest level of protection for less than 1% of their area. In four cases, less than 1% is covered even when areas of higher and lower protection are added together.

A key problem is that the highly protected areas tend to be in deep water, whereas the most vulnerable ecosystems are usually closer to shore, on the continental shelf, says Possingham. He notes that many of the shallower areas in the north and northwest, which are under-represented in the plans, are suspected to have fossil-fuel potential. “One could wildly speculate that the Australian government is reluctant to forgo opportunities in that area,” he says.

The Australian Department of Sustainability, Environment, Water, Population and Communities, which oversaw the creation of the network, said that it would not be able to comment before Nature went to press.

Bob Pressey, who works on conservation planning at James Cook University in Townsville, is also concerned. He says that, just like land-based reserves, the regions chosen by nations to be marine reserves, especially around Australia, tend to be the least commercially useful and so the least controversial to conserve, even though they may also be the least threatened. “This is a problem that we should be worried about,” he says.

Countries are keen to learn how best to set up marine protected areas so that they can comply with the Convention on Biodiversity, an international agreement specifying that countries should be conserving 10% of their marine regions by 2020 (see Nature 480, 166–167; 2011). “We’re watching it [Australia] very closely,” says Les Kaufman, a biologist at the Boston University Marine Program in Massachusetts. He says that similar exercises are under way in California and New England, and that lessons so far from these and other regions suggest that at least 10%, and preferably 20%, of each habitat must have the highest levels of protection to truly safeguard all the ecosystems.

Despite their concerns, experts say that the trend to conserve ecosystems, rather than just individual species, is encouraging. “What Australia has attempted here is a world first,” says Imogen Zethoven, who leads work on Australia’s marine systems for the Pew Charitable Trusts environmental non-governmental organization in Sydney. “The proposed reserves are a very big step forward for marine conservation.”

Possingham, too, praises Australia’s effort, saying that “it’s a really good first step”, but warns that “nobody should imagine the job done”.