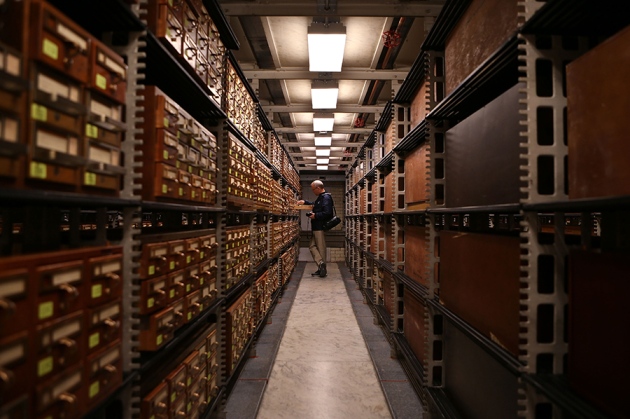 Shelves of paper catalogues in the main reading room of the US Library of Congress Thomas Jefferson building.

Engineers can only stuff so much computing power into devices like smartphones and tablets before they run up against physical barriers. Although Moore's law famously predicts that the number of transistors people can squeeze onto memory chips will double every couple of years, technology cannot be miniaturized indefinitely.

Researchers are trying to get around this by starting small — using individual atoms — to make big gains in data-storage capacity. Now, a team has developed a 1-kilobyte rewritable data-storage device using chlorine atoms arranged on a small metal surface. If the team expanded that surface to one square centimetre, it could hold about 10 terabytes of information, the researchers report on 18 July in Nature Nanotechnology1.

“It’s by far the largest assembly on an atomic scale that’s ever been created, and it outperforms state-of-the-art hard disk drives by orders of magnitude in data capacity,” says lead study author Sander Otte, a physicist at Delft University of Technology in the Netherlands.

The technique depends on the ability to reliably and quickly rearrange individual atoms. Scientists demonstrated how to do this in 1990 when they carefully gathered xenon atoms scattered across a surface to spell out 'IBM'. Now, Otte and his team have taken the concept further. They arranged chlorine atoms into square grids on a copper surface, and then placed those grids side-by-side like uninterrupted terraces.

Each grid contains a few empty slots, or holes. This allows the research team to move atoms around, much like sliding pieces around in a tile puzzle. Each line on a grid encodes one unit of digital information called a byte.

Otte’s team uses a scanning tunnelling microscope with a sharp needle, like the tiniest of tweezers, to probe the atoms and make them hop into adjacent spaces. One chlorine atom and one vacancy make one bit (there are 8 bits in one byte). Moving chlorine atoms in and out of vacant spots means researchers can switch between ones and zeroes, the basis for computer code.

This pattern of atoms and vacant spaces encodes the letter 'e'.

The researchers were also able to place atomic markers at the upper left corner of each grid, which reduced the amount of time necessary to read the information encoded into each arrangement. The device reading the grids can simply read the marker that indicates the end of a line of code, for instance, rather than slog through the entire pattern bit by bit. The automated process only takes a few hours to read or write, whereas earlier ones would take days.

Not for prime time

One of the big drawbacks of this device is that it must be kept at –196 °C: the boiling point of liquid nitrogen. This is a far cry from room temperature, but it’s warmer and less expensive than using liquid helium as a coolant, as did previous attempts to develop atomic memory2.

“It’s very nice proof-of-principle work, demonstrating the first step of applying this technique of atomic manipulation to something that could lead to a functional memory device,” says Stefan Fölsch, a materials physicist at the Paul Drude Institute for Solid State Electronics in Berlin.

If researchers could scale the technology up to larger structures and arrange their grids in three dimensions, then one could pack hundreds of terabytes — equivalent to all the information contained in the US Library of Congress — into a cube the size of a grain of salt. Further improvements could prove useful to data storage in the cloud, reducing the need for new data centres.

But data storage is just one application. “Otte’s research gets people interested in thinking about what we want to do on an atomic scale,” says Chris Lutz, a staff scientist at IBM Research at Almaden Research Center in San Jose, California. In the long term, Otte and his colleagues’ research could pave the way to designing new materials, atom by atom.