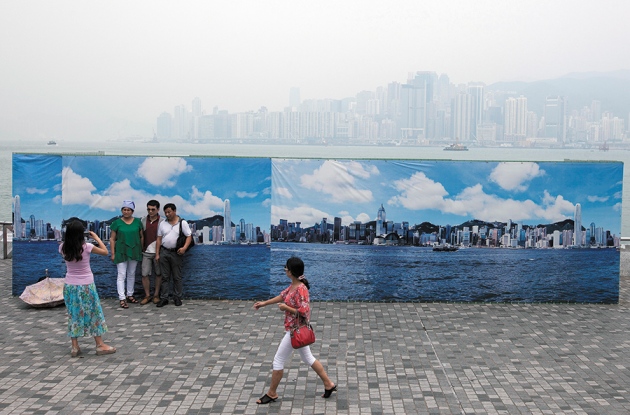 China's cities are among the world's worst in terms of air quality.

Dirty air threatens the health of billions of city dwellers around the world. China's megacities are among the worst, with concentrations of airborne pollutants 10–100 times higher than those in Europe or North America, and occasionally even 1,000 times higher. An estimated 2.5 million people in China die each year from the health effects of indoor and outdoor air pollution1, 2.

Efforts to improve air quality are targeting only the tip of the iceberg. Cities such as Beijing routinely measure levels of particulate matter measuring 10 micrometres (PM10) and 2.5 micrometres (PM2.5) in size, as well as a few gases such as sulfur dioxide (SO2), nitrogen oxides (NOx), carbon monoxide (CO) and ozone. But urban air is a complex cocktail of chemicals whose poorly understood interactions and feedbacks may exacerbate health problems. Efforts to reduce one pollutant can have perverse effects on others as conditions change.

The chemistry of China's polluted urban air is unprecedented. Higher populations, heavier industries and modern goods manufacturing, as well as the climatic conditions, make Beijing's smogs markedly different from the 'pea soupers' that afflicted London and other European cities 50 to 100 years ago. Many atmospheric processes are nonlinear — meaning that the relationship between cause and effect is not proportional. So we do not know and cannot predict which harmful compounds are being formed. Whenever my colleagues and I make measurements with new instruments in China, we find unexpected results. Indoor air quality is equally affected.

The nation's urban air can begin to be cleaned only if a comprehensive monitoring and modelling approach takes atmospheric chemistry into account. To guide decisions, we need to know which hazardous pollutants are present and how they interact to generate secondary pollution.

Here I outline a road map for bringing China's cities up to European air-quality standards within a decade. Actions towards cleaner air, as well as improving health (see 'Deep clean'), will reduce greenhouse-gas and black-carbon (soot) concentrations and enhance freshwater quality3 and food supply. 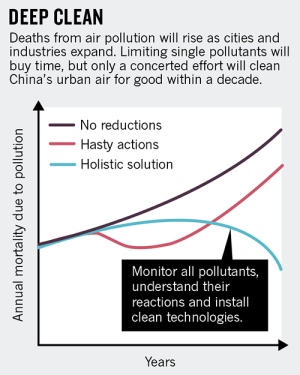 China's air pollution has worsened as emissions from industry, energy production and traffic have grown. China is responsible for 30–35% of the global SO2, NOx, CO and particulate emissions, and 40% of global particle numbers (PN) in the 20–1,000-nanometre size range (see go.nature.com/uw3jx6). The nation's share of global greenhouse-gas emissions is 29% for carbon dioxide and almost 20% for methane. Government efforts are under way to reduce the emissions of all these.

But it is impossible to reduce secondary pollutants such as ozone and organic aerosols without a deep understanding of the chains of chemical reactions and physical processes that pollutants undergo. The formation and decay of secondary pollutants depend on temperature, humidity and wind speed as well as other chemicals and particles in the urban atmosphere. There is so much that we do not know. Results are hard to predict because many physical and chemical processes — such as surface chemistry, oxidation, clustering and dynamical effects — happen simultaneously4.

Attempts to control one pollutant can increase the concentration of others. Measurements in Nanjing, for example, show5 that reducing NOx emission could cause a tenfold increase in summer ozone concentrations. Reducing smog increases sunshine levels and temperatures, and alters rain and snowfall patterns6.

Surprising reactions are going on above Chinese cities that do not occur in cleaner air. For example, small atmospheric molecular clusters (measuring 1–3 nanometres) are tens of times more concentrated in Shanghai, Nanjing and Beijing than in European cities. Secondary aerosols (containing sulfates, nitrogen compounds and organics) form more readily in Shanghai and Nanjing than existing models predicts7. Unknown chemical pathways and physical processes must be occurring8 that could create new types of oxidant or change the surface properties of aerosols, limiting their ability to take up condensable vapours.

Indoor air quality is also a problem. City dwellers spend more than 90% of their time indoors, particularly if outdoor air quality is poor. Cooking, smoking, heating and furnishings release PM, PN, CO, volatile organic compounds (VOCs) and NOx, adding to pollutants drawn in from outside. Little is known about the pollution levels in Chinese homes, but my team's preliminary findings indicate that concentrations of some pollutants are higher than those outdoors (especially for PN and VOCs) and 100–1,000 times higher than inside European homes. My colleagues and I estimate that indoor air pollution contributes almost as much as outdoor smog (which causes more than 1.3 million deaths per year) to the pollution-related death toll. 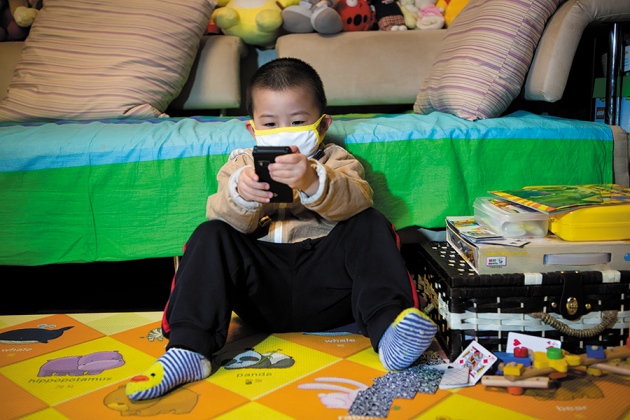 Pollutant levels inside Chinese homes can be hundreds of times higher than those in European homes.

Again, little is known about the secondary production of chemicals indoors. Ventilation systems filter large particles but not gases such as VOCs, NOx and SO2, which can go on to form ultrafine sulfates, nitrates and organic particles. The risk of secondary aerosol production from these gases rises in filtered air because there are fewer grains on which to condense. As outdoor air gets cleaner, indoor air quality might even worsen.

It is important to continue efforts to cut pollution. But meeting the Chinese central government's goal of improving urban air quality to levels typical of the United States and Europe requires more: simultaneous tracking of all air pollutants relevant to health and their feedbacks and interactions — over at least a decade. We need to understand how the mixture and its toxicity changes as air quality measures are implemented. Short campaigns are not sufficient.

Central and regional governments, research institutes and universities should collaborate to do the following, with help from atmospheric chemists from around the world.

“As outdoor air gets cleaner, indoor air quality might even worsen.”

First, establish and fund a network of 'flagship' stations9 to monitor: concentrations, fluxes, interactions and feedbacks as well as more general air quality and meteorology data. Around 5–8 such stations (costing between US$7 million and $11 million each) would suffice for a major city. These should be complemented by mobile measurement platforms on cars and aeroplanes, remote sensing of air columns from the ground, satellite observations and smog chambers. Major sources of pollutants can be identified using historic data.

Second, indoor air-quality measurements and monitoring must be conducted concurrently in a representative selection of residential and office buildings.

Third, atmospheric chemists must model secondary-pollutant production pathways and feedback mechanisms under high concentrations of various pollutants. These models must then be compared with observations.

Fourth, the links between air pollutants and mortality and other health effects need to be established. That way the most health-relevant pollutants and their sources can be identified and mitigated first. A database should be developed to track health impacts.

Fifth, long-term sustainable engineering solutions such as improving processes and material flows in industry must be implemented to maintain low levels of air pollution. This will require capacity building across the Chinese authorities and institutes on using air-quality assessment data in decision-making, in developing legislative tools and in clean-air action plans.

Only by understanding atmospheric chemistry will China clean its air.