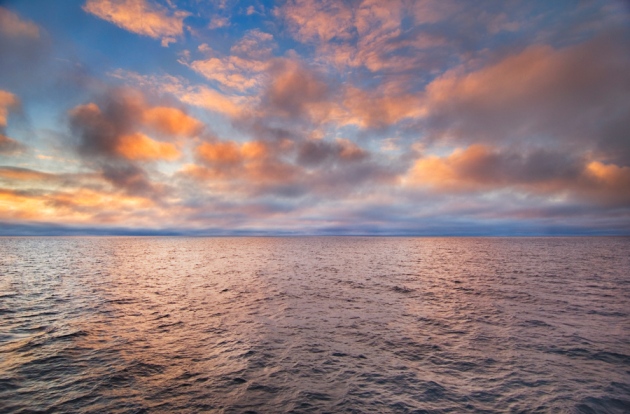 Warm tropical waters flow towards high latitudes, where they sink into the deep ocean and head back towards the Equator.

An apparent slowdown in global warming since the late 1990s may be due to changes in circulation patterns in the Atlantic and Southern oceans, suggests a study published in the 22 August Science1.

These circulation patterns carry sun-warmed tropical waters into the higher latitudes, where they sink and flow back towards the Equator, says lead author Ka-Kit Tung, an atmospheric scientist at the University of Washington in Seattle.

From the 1970s to the 1990s, Tung says, this movement was relatively slow. That allowed the warm water to linger at the surface long enough to lose much of its heat to the air, thereby contributing to rapid global warming.

But around 1999, the currents sped up, sending relatively warm water into the ocean depths instead. That is enough, according to Tung and his co-author Xianyao Chen, an oceanographer at the Ocean University of China in Qingdao, to explain why Earth’s land and ocean surface temperature seems to have plateaued since the anomalously warm year of 1998.

Scientists have struggled to explain this slowdown, with theories ranging from slight changes in solar luminosity to increases in Asian air pollution, which can produce a bright haze that scatters sunlight back into space.

Mystery of the missing heat

To test their hypothesis, Tung and Chen examined data from oceanographic instruments that have measured subsurface conditions since the early 1970s, to see if they could find the missing heat lurking in the deep ocean.

They first examined data from the Pacific Ocean, which had been the focus of several previous studies. “We could find a little bit [of change], but not enough,” Tung says. But when they looked at measurements in the Atlantic and Southern oceans, the researchers found a large increase in the amount of heat reaching depths of up to 1,500 metres, beginning around the time that global warming slowed.

This change in ocean circulation is linked to cyclical changes in salinity in high-latitude waters. When the circulation patterns are slow, warm surface waters have more time to lose moisture to evaporation. This makes them increasingly saline — and hence, denser — when they arrive at the high-latitude zones, where they sink. Eventually this reaches a critical point, at which fast-sinking waters speed up the current.

But Tung says that the effect will not last forever. As currents speed up, the warm waters lose less moisture to evaporation and become fresher. The heat that the water carries also causes glaciers, ice caps and pack ice to melt, releasing fresh water into the surface ocean. Eventually, the salinity lowers enough that waters do not sink as rapidly at high latitudes, slowing the global circulation pattern.

Temperature data from central England suggests that this process has been going on for roughly 350 years, on an approximately 70-year cycle2.

Tung says that his results show that global warming hasn’t halted. Comparing the long-term warming trend to a grand staircase, in which rapid rises are interspersed with plateaus, “we are now on the flat part of the staircase,” he says.

Other scientists are more sceptical about whether the work explains the apparent warming pause. “The rather strong conclusion that ‘the cause has been found’ is overblown,” says Gavin Schmidt, a climate scientist who directs the NASA Goddard Institute for Space Studies in New York. Schmidt says that multiple factors are at work, all pushing the climate in the same direction.

Richard Alley, a geoscientist at Pennsylvania State University in University Park, says the study is interesting — “but whether it’s a completely different story or part of the same story is something I think is still coming out.”

Alley welcomes the focus on the Atlantic, however. “Those of us who work in palaeoclimate have for a very long time had an idea that the Atlantic matters,” he says. “The evidence from the ice ages is that there were huge North Atlantic changes that show up in climate records all over the world.”