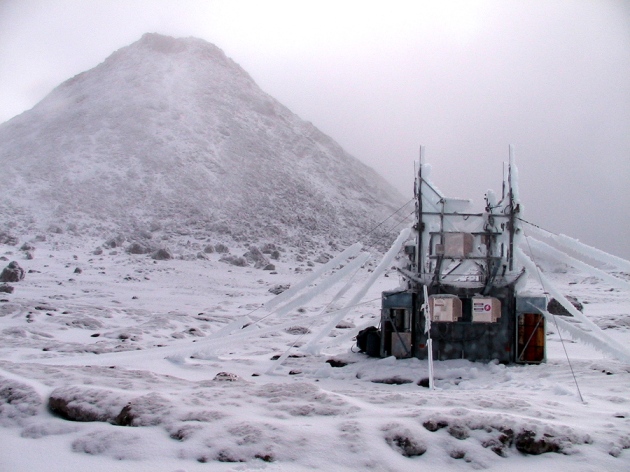 The Pico Mountain observatory sits high on a dormant volcano in the Azores.

For the past 13 years, atmospheric scientists have been tasting the air above Pico Mountain, a dormant volcano in the Azores archipelago. From a perch at 2,225 metres, just below the mountain's summit, the Pico observatory can dip directly into the gases and particulates that sweep across the Atlantic Ocean.

But this week, the sole technician is closing up the observatory and hiking down the steep mountain for what could be the last time. Unless the small band of scientists who use the facility can win new funding, the observatory could be mothballed indefinitely.

That would eliminate the only reliable mid-ocean point for measuring how pollutants waft eastwards from North America, says Detlev Helmig, an atmospheric scientist at the University of Colorado Boulder who works at Pico. Crucially, the observatory is high enough to capture gases and aerosols above the clouds, which tend to wash pollutants out of the atmosphere.

Scientists have used the observatory to study black carbon, trace gases, ozone and other atmospheric components — and have found, for example, that wildfires in the Arctic can send soot to the Azores in a matter of days. “You’re almost in Portugal and you can see smoke from Alaska with your naked eye,” Helmig says.

Observations at the site have also provided insight into atmospheric chemistry over the open ocean. Last month, researchers published the first details of how particles from biomass burning change as they cross the Atlantic1. “We get to see some really interesting things, like soot particles that seem to be stripped bare of the organic coatings they would normally have over the continents,” says Lynn Mazzoleni, an atmospheric chemist at Michigan Technological University (MTU) in Houghton.

Other high-altitude stations in the oceans, such as on the Canary Islands, are closer to Africa, and their measurements can be influenced by dust and particles from biomass burning, says Claudio Mazzoleni, an atmospheric physicist at MTU. “In the case of Pico it’s north enough to get mostly air coming from North America and travelling to Europe,” he says. “There isn’t any other place that is on that path at that elevation.”

The Mazzolenis hope to re-invent Pico as a natural laboratory for studying cloud–aerosol interactions, a complex and poorly understood influence on the global climate.They have applied for funding from the US Department of Energy, which measures atmospheric chemistry at sea level on the nearby Azorean island of Graciosa. Comparing sea-level and mountaintop aerosols could give a rare glimpse of the interplay between particles and the atmosphere, the Mazzolenis say.

The Pico observatory was founded in 2001 by Richard Honrath, an atmospheric scientist at MTU, and colleagues in Portugal, but was never intended to be a long-term station. Honrath died in a kayaking accident in 2009 and the observatory now belongs to the regional government of the Azores, which supplies it with electricity through a cable running up the mountain. Every summer, teams from the MTU and the University of Colorado hike up to the observatory — carrying equipment on their backs — to maintain measurements and fix anything that has broken.

PIco's financial struggles are not unprecedented. US-led mountaintop observatories tend to rely on soft-money grants rather than the sustained government support enjoyed by European observatories such as that above Switzerland's Jungfraujoch. At the Storm Peak Laboratory high in the Rocky Mountains, for instance, director Gannet Hallar has had to cut back on staff in recent years. “We’re all in the same boat,” says Hallar, an atmospheric researcher at the Desert Research Institute in Steamboat Springs, Colorado.

It is impossible to put hard numbers on Pico's annual budget because of the shared soft-money funding, says Helmig. But field workers there can spend up to thousands of dollars per month on travel and living expenses.

Pico scientists still hope to find a way to keep the observatory open. “Is it going to be easy? I don’t think so,” says Fialho. “Can it die? Yes, for sure. Should we give up? Not without a fight.”