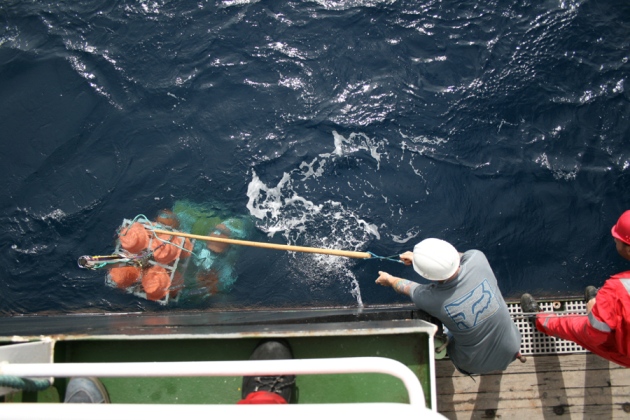 A sensor-equipped mooring that measures the strength of the Atlantic Ocean’s overturning currents.

The marked slowdown in the past decade of the warm Atlantic Ocean currents that bring mild weather to northwestern Europe may be caused by natural variation and not anthropogenic climate change, as has been previously suggested.

The Atlantic Meridional Overturning Circulation (AMOC) is part of the great ocean ‘conveyor belt’ that ceaselessly circulates sea water, heat and nutrients around the globe. In particular, it transports large amounts of warm water from the tropics to the poles, warming the British Isles and maritime northern Europe along the way (see ‘Current affair’). But since 2004, ocean sensors have detected a significant decline in the strength of the currents1 and a cooling of the subtropical Atlantic as a result2. From mid-2009 to mid-2010, for example, the circulation slowed to two-thirds of its usual strength — and some oceanographers suggested that the drop caused the harsh weather in the United Kingdom and western Europe that winter (see Nature 497, 167–168; 2013). 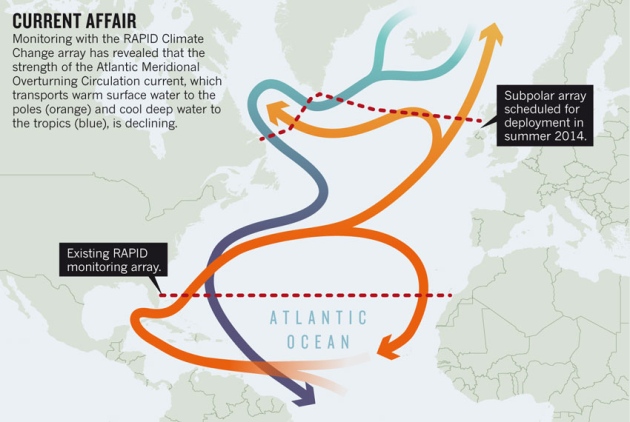 Climate scientists had speculated that the slowdown is linked to man-made climate change. But an analysis3 presented last month by a team of British scientists at the annual assembly of the European Geosciences Union in Vienna suggests that the AMOC’s slowing could just be part of natural oceanic fluctuations. The researchers added, however, that it will take more long-term monitoring to definitively rule out climate change as a factor.

Scientists think that the AMOC might be subject to abrupt changes that have probably played a part in ancient climate events, such as the sudden temperature swings 18,000 to 80,000 years ago during the last glacial period. The AMOC’s main engine — the sinking of cold, dense water to the bottom of the North Atlantic — has been identified as a potential ‘tipping element’ in Earth’s climate system, in which small climate perturbations could push the system past a critical threshold, with potentially large consequences for humans and ecosystems4.

Since 2004, 22 moored sensors have been deployed between the Canary Islands and Florida along the latitude line at 26.5° north — where the AMOC emits its maximum heat. The sensor array, known as the RAPID Climate Change monitoring array, has continuously monitored the strength and temperature of the current at different depths.

“It could have significant consequences for society.”

RAPID measurements previously revealed1 that the circulation weakened by 3% per year on average between 2004 and 2008, with a mean strength of 17.5 million cubic metres per second. Most of the past decade’s observed decline occurred between April 2008 and March 2012, when the AMOC was around 15% weaker on average than in the previous four years. The measurements also showed that the strength of the currents varied by up to 70% from year to year, depending on wind and seawater temperature.

To find out whether the observed long-term decline lies within the range of natural yearly fluctuations, Chris Roberts, a climate scientist at the UK Met Office’s Hadley Centre in Exeter who led the latest analysis, compared the observed trend with estimates of circulation strength derived from 14 state-of-the-art climate–ocean models. If the variability in modelled circulation strength were to differ substantially from observed trends, it could suggest that the decline is down to an external forcing factor such as climate change.

Although the results suggested that the downward trend is extremely unusual, Roberts knew that models can substantially under­estimate the actual year-to-year variability in the strength of the AMOC. When he and his team adjusted the models to incorporate more-realistic natural fluctuations, the downward trend was statistically in line with the expected variations. Even if the slowing continues at the current rate, the trend will not differ significantly from plausible estimates of natural variability for 18 more years, the team concluded. But it will take at least 10 more years of continuous observation to detect any influence of man-made climate-change effects, says Roberts.

“There’s nothing at the moment that would suggest that something dramatically worrying is going on,” says David Smeed, an oceanographer at the UK National Oceanography Centre in Southampton and a lead researcher in the RAPID programme. He suggests that the weakening of the AMOC could be because of the Atlantic Multidecadal Oscillation — a natural cycle of ocean variability in which Atlantic temperatures dip every 60 to 70 years.

RAPID, which was funded by the Natural Environment Research Council in Swindon, UK, was last year extended to run until 2020. Another array, funded mainly by UK and US science agencies, will be deployed this summer in the North Atlantic between Labrador, Greenland and Scotland to monitor the AMOC in subpolar regions. Together, data from the two arrays should help to explain the mechanisms behind the changes in circulation, says Susan Lozier, an oceanographer at Duke University in Durham, North Carolina, especially because the subpolar array is along a similar latitude to the main driver for the Atlantic Ocean circulation system.

Regardless of the cause of the AMOC’s decline, if the trend persists “it could have significant consequences for society” in terms of the climate in northwestern Europe, says Roberts. Nevertheless, being able to predict the strength of the current could help to improve short-term regional climate forecasts, he says.