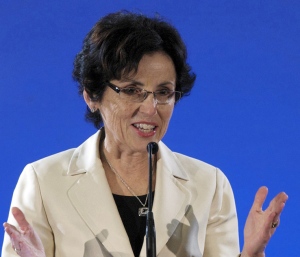 It is a rare path that leads an English major to the top of the world's biggest basic-science agency. But that could be the case for astrophysicist France Córdova — a one-time undergraduate English major — after US President Barack Obama nominated her on 31 July to head the National Science Foundation (NSF).

Córdova, a long-time university administrator and former NASA chief scientist, is currently chairwoman of the governing board of the Smithsonian Institution, the world's largest museum complex, based in Washington DC. At the NSF, she would replace Subra Suresh, who left the US$7-billion agency in March less than three years into his six-year term. If she is confirmed by the US Senate, Córdova would be the second woman to helm the 63-year-old agency, following environmental microbiologist Rita Colwell, who served as NSF director from 1998 to 2004.

“She’s a rock star,” says former NASA administrator Daniel Goldin, who recruited Córdova to serve as the space agency’s chief scientist in 1993. Goldin says she was instrumental in his push for “faster, better, cheaper” research to expand NASA’s scientific reach despite a tough fiscal climate. “As chief scientist, she was minister without portfolio — she had no budget,” Goldin says. “But she got things done with a deep intellect and collaboration, by building consensus and working with Congress and international partners.”

Those qualities were also evident during Córdova’s tenure as president at Purdue University in West Lafayette, Indiana, says former NSF director Arden Bement, a nuclear engineer who returned to Purdue in 2010 — at Córdova’s behest — to run a new global-affairs centre. “She increased the ranking of the university and raised a lot of money,” Bement says. “She greatly increased the reputation of the university as an international university.” Purdue now ranks second among public universities for the number of international students it attracts, and under Córdova, the university established research collaborations with foreign governments and universities.

That success at Purdue, during a period of intense budget pressures sparked by the recent global recession, augurs well for her prospects at the NSF, Bement says. Like the rest of the federal government, in March the agency fell prey to the across-the-board spending cuts known as sequestration, which chopped 5.1% from its 2013 budget. “That’s when you want the best people,” says Joel Parriott, director of public policy at the American Astronomical Society in Washington DC. Parriott has known Córdova since 2001, when they worked on a National Academy of Sciences survey of astrophysics priorities.

And Córdova is already well acquainted with the NSF’s inner workings. Since 2008, she has been a member of the National Science Board, which oversees the agency. She leads a committee that focuses on long-term strategy for the NSF.

“She’s somebody who has a very deep belief in and commitment to basic science, which I think is absolutely critical for the director of NSF,” says Robert Zimmer, president of the University of Chicago in Illinois and a National Science Board member who has worked closely with Córdova. “And she’s very cognizant and experienced with thinking about science in connection to the public good.”

After earning an undergraduate degree in English at Stanford University in California, Córdova radically shifted her academic interests, inspired by Neil Armstrong's trip to the Moon. She earned a doctorate in physics from the California Institute of Technology in Pasadena in 1979, and began her professional career that year as a researcher studying X-ray and γ-ray sources at Los Alamos National Laboratory in New Mexico. Córdova went on to lead the astronomy department at Pennsylvania State University in University Park during 1989–93.

She made the transition to administration in 1993, when she took the chief scientist job at NASA. She left after three years to become the vice chancellor for research at the University of California, Santa Barbara. In 2002, Córdova was appointed chancellor of the University of California, Riverside, and in 2007 she moved to Purdue. In an interview at the time, she told Nature, “I like complexity, and thrive on stress — it keeps me energized.” Córdova left Purdue last year.

As the Obama administration’s nominee to lead the NSF, Córdova now begins the sometimes arduous process of winning confirmation from the US Senate. Although NSF candidates have traditionally garnered strong support on Capitol Hill, Córdova’s nomination comes at a time when Republican lawmakers have deployed a raft of procedural tactics to delay consideration of key Obama administration picks.