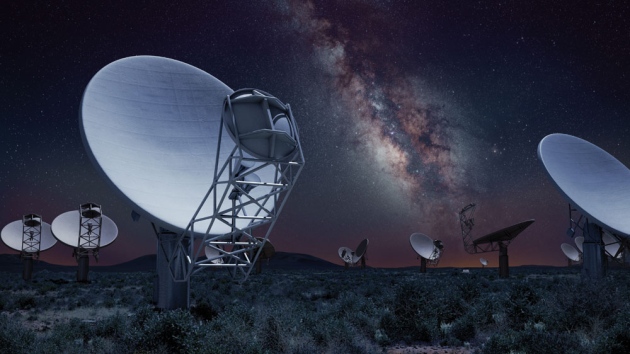 The MeerKAT telescope in South Africa, seen here in an artist’s impression, will be a prototype for the vast Square Kilometre Array.

The 90-kilometre drive starts in the sheep-ranching town of Carnarvon in western South Africa, and runs northwest through the semi-desert plains of the Karoo, where the only sign of human settlement is an occasional sheep farm. But as the road begins to pass north of the flat hills of the Losberg mountains, it suddenly comes upon seven huge white radio dishes.

This is the Karoo Array Telescope (KAT-7), a government-funded facility sheltered by distance and the Losberg from human-generated radio interference. Commissioned just this year, KAT-7 is both an operational radio telescope and a prototype for the much more ambitious MeerKAT project, a 64-antenna array that will be the largest radio-astronomy facility in the Southern Hemisphere when it is completed at this site in 2018. But KAT-7 also symbolizes an even bigger ambition: South Africa hopes that by 2024, this remote expanse will be the centre of a radio facility spanning the continent.

The Square Kilometre Array (SKA) — named after the total collecting area of its 3,000 or so antennas — would be by far the largest radio telescope ever built (see 'The biggest array'), and would need international funding to cover its estimated US$2.1-billion cost. It would allow astronomers to see how primordial gas formed the first stars and galaxies; how mysterious 'dark energy' has shaped galactic clusters; and how Earth-like planets form around young stars. It might even allow researchers to eavesdrop on the faint radio emissions of extraterrestrial life.array 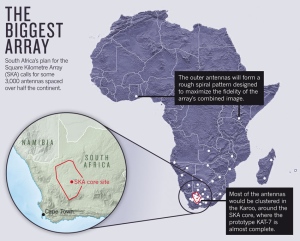 Or maybe not: South Africa's quest faces long odds. The most immediate hurdle is a fierce competition with Australia to host the facility. The two nations submitted their sealed bids in September to the international SKA Program Development Office at the University of Manchester, UK, and a decision is expected by March 2012.

A more serious question is whether the SKA will be built at all. Getting cash-strapped governments to invest in radio astronomy is a daunting prospect in the current economic climate. And even more daunting is the computational challenge: the number of calculations required to correlate the antennas' radio signals and forge them into a single image increases massively with the number of dishes. The full-scale SKA would need thousands of times more processing power than is currently available in the fastest supercomputers — a big reason why US researchers didn't rank the SKA when drawing up astronomy priorities last year1.

“It is not clear that the technology for the required correlators is in hand, or even over the horizon,” says Adam Burrows, chair of the US National Research Council’s physics and astronomy board. “It just may require another decade to establish a credible financial and technological plan for such a massive undertaking.”

But the SKA's proponents in South Africa are undeterred. The act of competing has given the country's astronomy programme a major boost and, they argue, could do the same for science and technology across the board. “By giving the country a major opportunity to raise its level, and to inspire and train a new generation, the SKA could represent a new dawn for science in Africa,” says Roy Maartens, a cosmologist at the University of the Western Cape in Cape Town.

The prospect of an astronomy renaissance was a big draw for Bernard Fanaroff, the director of South Africa's SKA effort. A radio astronomer by training, Fanaroff left academia in the 1970s to pursue racial and economic justice in South Africa — first with the country's nascent trade-union movement, and then as a senior civil servant in the reconstruction and development programme of the first post-apartheid government. After leaving government in the early 2000s, Fanaroff seized on the SKA's potential for inspiration as yet another way to pursue change.

International planning had been under way for a decade by that point. But the country still had a fighting chance. All of the site-selection criteria, starting with the need for a good view of the centre of our Galaxy, favoured the Southern Hemisphere.

Fanaroff soon found an ally in Rob Adam, then director-general of the South Africa Department of Science and Technology. Adam wanted to address the chronic lack of maths and science skills in the black majority of the country's population — a legacy of both apartheid and a stagnant education system. And he believed that high-profile science projects such as the SKA were the best way to excite young people and draw them into research2.

With Adam's backing, Fanaroff prepared a bid for the SKA and submitted it in 2004. Bids also came in from Australia, China and Argentina. But only when the field was narrowed to South Africa and Australia in 2006 did the race really begin. Ever since, the two countries have chased the SKA with as much fervour as they strive against each other in cricket and rugby.

In 2007, for example, Australia vowed to build the Australian SKA Pathfinder (ASKAP) at its proposed site near Murchison, in the arid west of the country. The 36-dish facility would demonstrate antenna designs and other technologies, and together with associated infrastructure and human-capacity development would cost an estimated US$490 million (ref. 3). In 2008, despite the global recession, South Africa countered with a commitment to its own pathfinder, MeerKAT. (The name refers to meer, Afrikaans for 'more,' as well as to a famously photogenic mammal found in the Karoo.)

The $275-million estimated cost of the South African scheme represents the country's largest-ever investment in a pure-science project — and a source of major irritation for researchers in more tightly funded disciplines4. But officials say that the project is good for economic development: not only were MeerKAT's antennas designed by Land Systems Dynamics, a subsidiary of British Aerospace Engineering based in Pretoria, but they will be manufactured and assembled mainly in South Africa.

The ruling government, which was elected in 2009, is determined to protect the bid. This year, when oil company Shell applied to drill for natural gas just south of the MeerKAT site, for example, Naledi Pandor, the science and technology minister, made it clear that she would invoke the country's Astronomy Geographic Advantage Act to block interference with the array, whether it came from radio activity or seismic disturbances5.

Pandor has also moved to resolve a major embarrassment: last year's suspension and subsequent exoneration of Phil Charles, then director of the South African Astronomical Observatory in Cape Town, who had tangled with his bosses in the National Research Foundation for reasons that are still unclear6. The incident left many South African astronomers mistrustful of the foundation. In October, Pandor announced that control of the country's astronomical facilities would eventually be taken from the agency and vested in a new organization.

The South African and Australian bids for the SKA are being evaluated this month by a site advisory committee. The committee's recommendation will be sent to the directors of the SKA organization before its final decision.

Down to the wire

It could be a close call. Radio interference is minimal at both sites, and other observing conditions are equivalent, so the SKA directors will have to look at other criteria, such as antenna design. The technical differences boil down to a trade-off, says Tony Foley, head of science operations at MeerKAT. “The Australians can catch a larger patch of sky” at any one time, he says, “whereas we are operating at higher sensitivity” — meaning that the South African antennas will look farther into the Universe with a shorter observation time.

Another factor will be the strength of the host country's astronomy community. Australia has a longer and stronger tradition of radio astronomy, but South Africa has poured money into closing the gap. The country's roster of radio astronomers currently numbers about 65, many of whom have moved from elsewhere during the past decade.

Then there is what some see as the moral imperative. “There is a need for the first world to help the third world build up science,” says George Ellis, a cosmologist at the University of Cape Town. “This is an ideal opportunity.”

How the international SKA organization will weigh these factors is hard to predict. But astronomy isn't rugby; it could be that both sides will win. In July, recognizing the bleak prospects for international funding and the computational challenges, European astronomers proposed a cheaper alternative: fund modest expansions of both ASKAP and MeerKAT, then combine their signals as if they were a single instrument. The combined array wouldn't have nearly the same sensitivity to very faint signals as the full-scale SKA. But it may well be the most realistic option.

Win, lose or draw, the competition has already given South Africa a symbol of national unity. From government officials to cab drivers, everyone there seems to know about the SKA. The Department of Science and Technology sponsors a monthly performing-arts festival in support of the bid. And South Africa's financial daily, Business Day, often runs front-page advertisements sponsored by the SKA project, featuring a full-colour photo of the KAT-7 antennas with the boastful headline: “South Africa is ready to host the SKA.”