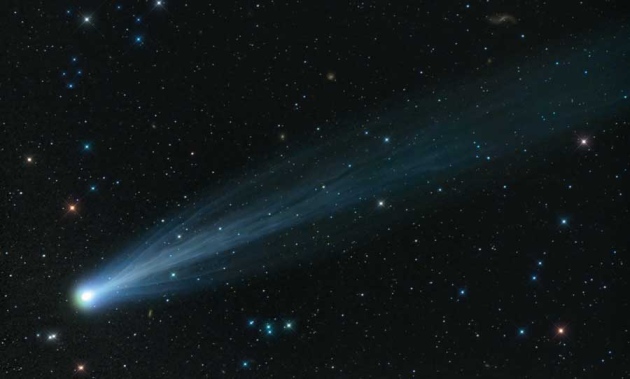 Near the banks of the Potomac River, in an office cluttered with craft-beer coasters and a Doctor Who mug, Karl Battams keeps watch for daredevil comets that skim just above the surface of the Sun.

A decade ago, when the astrophysicist joined the US Naval Research Laboratory in Washington DC, he had no deep interest in comets. But he was pressed into service because the lab operates instruments on two solar-physics missions that can spot objects passing very close to the Sun. They have detected some 2,600 such 'sun-grazing' comets so far, and it is part of Battams' job to catalogue those discoveries. He is the only dedicated sun-grazing-comet tracker in the world. “Hopefully, I'll be getting a summer student,” he says one overcast January morning. “But pretty much it's just me.”

All of the Solar System's comets travel around the Sun, but sun-grazers are those that fly within about three solar radii of the star's centre (some 1.4 million kilometres above its surface). Battams rose to fame last autumn as the public face of a research group tracking the most famous sun-grazer of all, Comet ISON. As ISON sailed into the inner Solar System, expectations grew quickly among astronomers and amateur skywatchers. Many hoped that it might survive its close passage to become a dramatic sight in the night sky — and continued fodder for scientific study. Instead, the comet disintegrated spectacularly in November, just hours before it was set to sweep past the Sun.

Scientists are left wondering why ISON suffered the fate it did. Early results suggest that it may have been just too small and too volatile to survive the Sun's searing heat (M. M. Knight and K. Battams Preprint at http://arxiv.org/abs/1401.7028; 2014). ISON was a tiny, gassy comet making its first ever trip to the inner Solar System — a combination that may have doomed it from the beginning.

Yet its death could mark a renaissance for the study of sun-grazing comets. ISON was spotted quite far out in the Solar System, and its unusual trajectory allowed spacecraft orbiting Earth, Mars and Mercury to photograph it from many vantage points. That made ISON the most studied sun-grazer yet. What researchers have learned so far suggests that sun-grazers have a lot to reveal about the diversity of comets, and how hard it is to predict what they might do. Even as they wring findings out of the ISON event, astronomers are gearing up for the next close cometary encounter, later this year.

The sheer amount of observational firepower involved in studying ISON set a new standard for coordinating a flotilla of spacecraft and ground-based telescopes. “It was about bringing all of it together,” says Battams. “That's never been done before.”

For centuries, skywatchers have recognized objects that disappear into the Sun and re-emerge on the other side. In 1687, Isaac Newton published the first calculations of a sun-grazer's orbit, showing that the great comet of 1680 moved according to his laws of gravitation. But it was not until the era of satellites that people could watch sun-grazers up close.

Amateur astronomers discover most sun-grazers, just days before they pass through the Sun's atmosphere, by trawling through images taken by the Solar and Heliospheric Observatory (SOHO) spacecraft. Launched in 1995, SOHO stares at the Sun with a set of three US Navy-built coronagraphs that block out the central disk of the Sun, allowing astronomers to see details in and around its blazing outer atmosphere. Once they have found a candidate comet, the amateurs alert Battams. 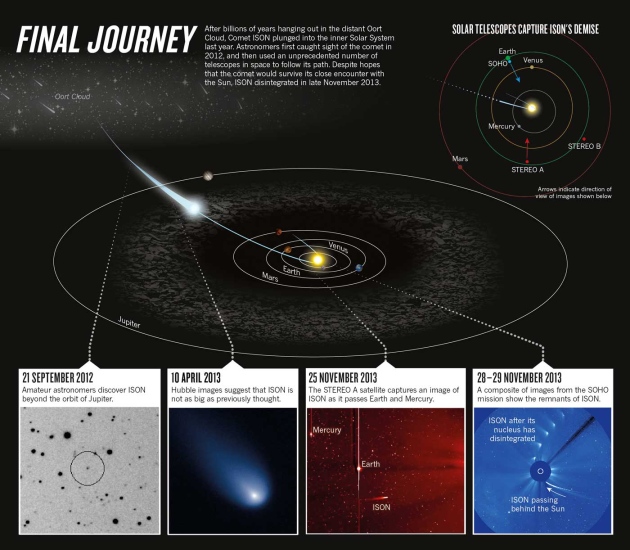 Most sun-grazers belong to the 'Kreutz' family of comets, named after Heinrich Kreutz, a nineteenth-century astronomer who calculated many of their orbits. Kreutz comets probably trace their origins back to a single comet that broke apart millennia ago. On each pass near the Sun, the fragments either squeak past it and survive, or plunge to a fiery doom if they come too close. Every week or so, Battams watches one of these comet pieces incinerate itself.

In 2011, however, a Kreutz comet swooped just 140,000 kilometres above the solar surface and survived — temporarily. After zipping through the Sun's upper atmosphere, Comet Lovejoy remained intact and put on a spectacular show in southern skies. Days later it fell apart, probably ripped to pieces by tidal forces induced by the Sun's powerful gravitational pull. Researchers took unprecedented measurements of Lovejoy's tail fluctuating in the Sun's powerful magnetic fields during the comet's brief passage through the solar atmosphere (C. Downs et al. Science 340, 1196–1199; 2013).

In September 2012, the spotlight shifted to another sun-grazer when a pair of Russian astronomers discovered a tiny dot in the sky in the constellation Cancer. Because their telescopes belonged to the International Scientific Optical Network, the comet was dubbed ISON.

At the time, ISON was nearly one billion kilometres from the Sun, out past Jupiter. That is much farther than most comet discoveries, because comets become more active and more visible the closer they get to the Sun. The early discovery hinted that ISON was either monstrous in size or surprisingly active, prompting expectations that it would become a historic sight in the skies as it reached the inner Solar System.

Doubts emerged in April 2013, when the Hubble Space Telescope photographed ISON. Although the observing team could not measure the comet's nucleus directly, the researchers concluded that the amount of water spraying off the icy core suggested that it could be no more than 6 kilometres across, a little less than average.

“Never before have astronomers watched a dynamically new comet come so close to the Sun.”

Another opportunity to measure the comet came in late September as it flew past Mars. The High Resolution Imaging Science Experiment (HiRISE) on the Mars Reconnaissance Orbiter (MRO) — the sharpest-eyed camera ever to fly beyond Earth orbit — swung to look at ISON, and took a set of grainy, black-and-white photographs. These turned out to yield a better size estimate: ISON could be no more than 1.2 kilometres across. “It was a little thing,” says Carey Lisse, who studies comets at the Johns Hopkins University Applied Physics Laboratory in Laurel, Maryland.

That worried astronomers. The smaller the comet nucleus, the less likely it is to survive a close pass by the Sun. Even so, some scientists thought ISON would make it (see Nature http://doi.org/rdm; 2013).

ISON's fate started to become apparent in the days before it reached the Sun. By 20 November, it was spraying off massive amounts of water vapour, at rates that suggested that it was no more than 500 metres across. A few days later it entered the field of view of the coronagraphs on the twin satellites of the Solar Terrestrial Relations Observatory (STEREO), on the opposite side of the Sun from Earth. The comet continued to brighten, then faded a bit, then ominously brightened again as if it were already flaming out.

The closer it got to the Sun, the worse ISON looked. “Where we really went 'uh-oh' was the morning of close approach,” says Matthew Knight, an astronomer at Lowell Observatory in Flagstaff, Arizona. On 28 November, the US Thanksgiving holiday, Knight, Battams and Lisse gathered on Kitt Peak in Arizona to watch for the comet. Knight was hoping to use a solar telescope there to take spectra of ISON as it flew 1.2 million kilometres past the Sun. He got up extra early, crunched the numbers on the comet's brightness, and realized that, overnight, it had faded beyond hope. It had shrunk to an unsustainable size — perhaps just 50 metres across — and was on the verge of shattering completely.

For hours the team, plus comet fans around the world, watched as ISON flew through the SOHO and STEREO fields of view. It grew fainter as it approached the Sun, and could not be seen at all by a third solar probe peering closer to the star. On the far side of the Sun, where the nucleus would have emerged had ISON remained intact, a ghostly cloud of remnant dust appeared and quickly faded from view.

Battams took the loss of ISON personally. “It was kind of a process of heartbreak, really,” he says. “Born 4.5 Billion BC, Fragmented Nov 28, 2013”, he wrote in an obituary on an ISON-observing blog. “Survived by approximately several trillion siblings, Comet ISON leaves behind an unprecedented legacy for astronomers, and the eternal gratitude of an enthralled global audience.”

Although disappointed, Battams and other astronomers quickly moved on to glean clues from ISON's death. One major puzzle has been why ISON disintegrated and Lovejoy survived, when Lovejoy passed much closer to the Sun. The answer may lie in their ancient histories, says Knight.

As a Kreutz-family comet, Lovejoy had travelled through the inner Solar System several times before, burning off its most volatile components. But ISON was a 'dynamically new' comet that had never before visited this region of space. It hailed directly from the Oort cloud, the icy reservoir of comets beyond the orbit of Pluto. It spent most of its life in this cloud until perhaps a few million years ago, when the gravity of a passing star nudged it into a new orbit (see 'Final journey'). As it approached the Sun for the first time, volatile molecules began flying off its icy nucleus. Simple organic compounds, such as methane and carbon monoxide, would have burned off first, followed by more complex ones — much like a steak left on a grill too long. All that early activity explains why ISON looked so bright early on.

Never before have astronomers watched a dynamically new comet come so close to the Sun. The sequence and rate at which molecules burned off ISON are key data points for understanding the next one that comes in. “We've learned that dynamically new comets evolve and change,” says Lisse. That is much more than astronomers managed to learn in 2011 from the sun-grazing Comet Elenin, which was also a relatively fresh visitor to the inner Solar System, but was too dim to provide much science before it plunged to its death.

More broadly, the ISON experience may act as a template for future comet-observing campaigns. A record 14 missions photographed the comet from space, says Lisse, who coordinated the campaign for NASA. They included the Mercury Surface, Space Environment, Geochemistry, and Ranging (MESSENGER) spacecraft and the MRO at Mars.

That experience will inform a big event this October, when a comet named Siding Spring is due to pass within 140,000 kilometres of Mars. It will be the closest such pass ever seen, and the red planet will be physically enveloped in the comet's coma, the shroud of ice and dust around the nucleus. In a manoeuvre practised with ISON, craft such as the MRO will swivel to photograph Siding Spring. “It's like a cheap comet flyby,” says Lisse.

More expensively, the European Space Agency is sending its Rosetta spacecraft to land on and study Comet 67P/Churyumov-Gerasimenko in November (see Nature 505, 269–270; 2014). With the combination of Siding Spring, what is popularly called CG and the aftermath of ISON, some have labelled 2014 the year of the comet.

That is just fine with Battams, who keeps a sharp eye on whatever might enter his Sun-centric field of view. “Now it's just a case of sitting and waiting,” he says, “for the next interesting thing to come along.”