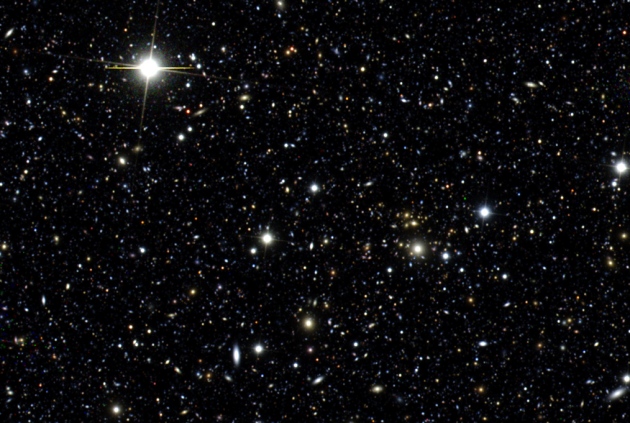 Simulated stars and galaxies from the LSST could help refine campaigns to understand dark energy.

The dark energy that is blowing the Universe apart is perhaps the most important problem in cosmology today. To help understand its mysterious nature, astronomers are hoping that competitions to crunch fake data will prepare them for the large amounts of information expected from sky surveys that will hunt for dark energy's effects.

One such contest, the Strong Lens Time Delay Challenge1, will be launched on 1 December and invites astronomers to analyse mock data for more than 1,000 galaxies. The data are made to show the effects of strong gravitational lensing, in which images of galaxies are grossly distorted by intervening matter between the galaxies and Earth. Dark energy further affects the images by stretching the distance between the source and Earth. The data set is simulated to look like output from the Large Synoptic Survey Telescope (LSST), an 8.4-metre telescope that astronomers expect to begin constructing next year in El Peñón, Chile. When it comes online in 2019, the survey telescope will yield 30 terabytes of data every night.

The competition is just one example of how astronomers are coping with ever-larger data sets, and seeking the best algorithms to extract signals from them. Astronomers have long relied on simulated data, but it is novel for the fake data to be created independently from the developers of analysis methods, says Tommaso Treu, an astrophysicist at the University of California, Santa Barbara, and an organizer of the contest. “This is something that is becoming more and more common as we become more aware of unconscious bias,” he says.

Another example came on 18 October, when astronomers launched the third Gravitational Lensing Accuracy Testing Challenge (GREAT3). In this contest, astronomers are using fake data to test methods to measure weak gravitational lensing, another way in which dark energy creates distortions in the shapes of galaxies. One aim of the contest is to find a method that works reliably even when the lensed galaxies have irregular shapes to start with, so the fake data include galaxies with both regular and irregular shapes. “We’re focusing on questions that are difficult to address in real data,” says Rachel Mandelbaum, a cosmologist at Carnegie Mellon University in Pittsburgh, Pennsylvania, who is a co-leader of the GREAT3 competition.

Cosmologist Eric Linder of the University of California, Berkeley, who is a member of LSST's dark energy collaboration, says that the contests underscore the importance of working blind to simulated data sets — without knowing the magnitude of signals in them. “This is something that began in physics and has made its way into astronomy,” he says.

Fake-data challenges have been used since at least 2002 in the field of gravitational wave detection. The collaboration that operates the Laser Interferometer Gravitational-wave Observatory (LIGO) — comprising sites in Hanford, Washington and Livingston, Louisiana — has in several instances inserted fake positive signals into LIGO data. The aim is to see if other scientists, who are not told beforehand whether the signals are real, can distinguish them from instrumental artefacts. LIGO's executive director David Reitze says that this practice will continue once an upgrade, called Advanced LIGO, is complete and the project starts taking data in 2015.