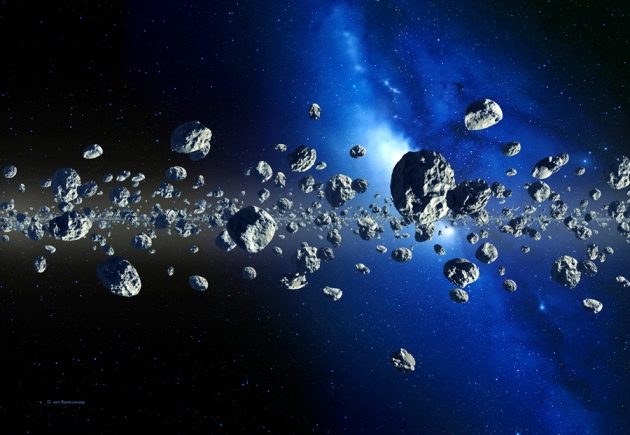 The Kuiper belt counts at least 70,000 objects with diameters larger than 100 kilometres, orbiting the Sun at least 30 times farther than does the Earth.

A planetary scientist has identified the largest-known solid object in the Solar System that could float in a bathtub. The rock-and-ice body, which circles well outside the orbits of the planets, is less dense than water — although a bathtub big enough to hold it would stretch from London to Frankfurt.

The body, dubbed 2002 UX25, lies in the Kuiper belt, a reservoir of dwarf planets, comets and smaller frozen bodies beyond the orbit of Neptune. The object's low density and size — it is 650 kilometres wide — seem to conflict with a leading model for the formation of large solid bodies in the Kuiper belt and throughout the Solar System. Planetary scientist Michael Brown of the California Institute of Technology in Pasadena reports its density measurement in an upcoming issue of The Astrophysical Journal Letters, with a preprint available on the arXiv online repository1.

Because objects in the Kuiper belt are believed to have changed relatively little since the early years of the Solar System, the region “offers our best chance to comprehend how the early stages of planet formation unfold”, says planetary scientist Andrew Youdin of the University of Colorado Boulder.

According to the leading model, small dust particles in the swirling disk that surrounded the infant Sun gradually collided and coalesced to form bigger particles. This process ultimately built dwarf planets in the Kuiper belt, such as Pluto, as well as Earth and the other rocky planets in the inner Solar System.

One possible explanation for the mismatch is that the smaller objects are more porous, whereas the stronger gravity of the bigger objects packs ice and rock more tightly, creating a denser structure. But for that scenario to hold true, medium-sized bodies — those with diameters of around 600 km — should have a density that is midway between the smaller and larger bodies.

The 650-kilometre-wide object 2002 UX25 as seen by the Hubble Space Telescope.

That turns out not to be the case if 2002 UX25 — the first intermediate-size Kuiper belt object to have its density measured — is typical of the vast number of similarly sized objects in the belt. On the basis of measurements made with several space- and ground-based telescopes, the object has a density of 0.82 grams per cubic centimetre — 18% lower than that of water.

The low density suggests that 2002 UX25 consists mainly of ice, making it difficult to understand how larger, more rocky objects could form from the merging of smaller bodies in the Kuiper belt, notes Brown.

But an alternative theory2 proposed by Youdin and a colleague could explain the results. According to his theory, the large Kuiper belt objects formed first. They were rapidly built from pebble-sized pieces of rock or ice that were forced to clump together by turbulent, swirling eddies in the Sun’s primordial, planet-making disk. Collisions between the large objects chipped away at their icy exteriors, forming the small, low-density Kuiper belt members and leaving behind large, rock-rich bodies.

To corroborate that theory, scientists will need to measure the density of more Kuiper belt objects that have a size similar to 2002 UX25, says Youdin. But even if the body turns out to be an oddball, he adds, its extremely low density “can't be easily dismissed”.