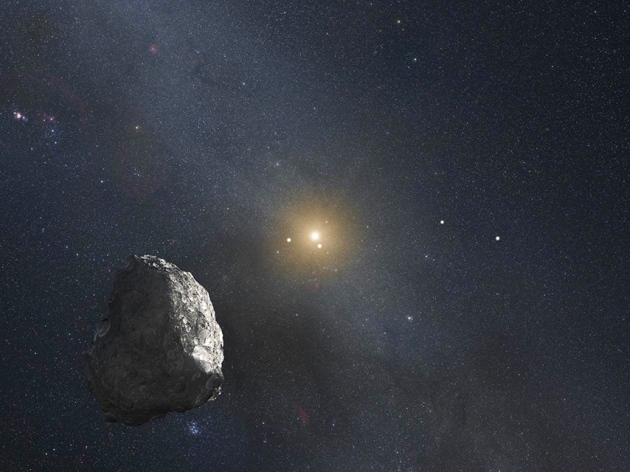 The Kuiper belt lies beyond Neptune.

Astronomers have spotted the most distant object ever seen in the Solar System: a frigid world that currently lies 103 times farther from the Sun than Earth does. It breaks a record previously held by the dwarf planet Eris, which had been seen at 97 times the Earth–Sun distance.

Scott Sheppard, an astronomer at the Carnegie Institution for Science in Washington DC, reported the object on 10 November at the American Astronomical Society’s Division for Planetary Sciences meeting in National Harbor, Maryland.

The object sits beyond the edge of the Kuiper belt (home to Eris and Pluto), and into the inner fringes of the next part of the Solar System, the Oort cloud. That extreme perch suggests that the body could be of scientific significance. Objects in this primordial realm travel orbits that have remained undisturbed for billions of years.

But astronomers have not tracked the newfound object for long enough to know its full path, and there is a chance that it will travel much closer to the Sun than its current distance of 103 astronomical units (au; 1 au is approximately 150 million kilometres). That would make it less interesting to astronomers.

“There’s no reason to be excited yet,” says Michael Brown, a planetary scientist at the California Institute of Technology in Pasadena.

Still, the discovery gives a rare glimpse into the fringes of the Solar System. Only two worlds are known in the inner Oort cloud: an object called Sedna, discovered by Brown and his colleagues1, and another one known as 2012 VP113, popularly nicknamed ‘Biden’ and identified by Sheppard and Chadwick Trujillo2 of the Gemini Observatory in Hilo, Hawaii.

Sedna never comes closer to the Sun than about 76 au; VP113’s closest approach is 80 au. If 103 au is as close as the newfound world ever gets to the Sun, it will join the other two objects as a scientifically fascinating resident of the inner Oort cloud.

But if the object moves much closer to the Sun — crossing into the Kuiper belt at about 50 au — it will join the ranks of many other, more-mundane Kuiper belt denizens whose orbits are particularly stretched out because of Neptune's gravitational influence.

Bodies in the inner Oort cloud are more intriguing than those in the Kuiper belt because they are too far away from Neptune to have ever been influenced by its pull, says Sheppard. Instead, their orbits probably reflect the primordial conditions of the Solar System, which formed more than 4.5 billion years ago — making them tantalizing targets for astronomers.

Sheppard and Trujillo discovered the object using the Subaru telescope atop Mauna Kea in Hawaii. The body is probably well over 500 kilometres — perhaps 800 kilometres — across. The researchers plan to look for it again next week using the Magellan Telescopes in Chile, and then in a year, to calculate its orbit and learn whether it is a true inner Oort cloud resident.