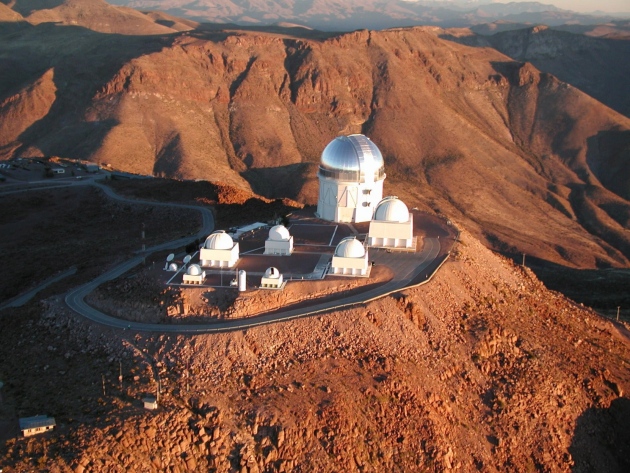 An aerial image of the Cerro Tololo Inter-American Observatory in Chile, which hosts the All Sky Automated Survey for SuperNovae, among other telescopes.

Astronomers have spotted what seems to be the brightest supernova ever discovered: an exploding star that shines brighter than 500 billion Suns. Don’t go looking for it with binoculars though: its light has taken 2.8 billion years to travel to Earth and, at such a distance, the supernova is only visible through a telescope.

The ASASSN-15lh supernova was first picked up on 14 June by two telescopes operated by the All Sky Automated Survey for SuperNovae at the Cerro Tololo Inter-American Observatory in Chile. In reports posted on the Astronomer’s Telegram — an online bulletin service — on 8 July, astronomers led by Subo Dong at the Kavli Institute for Astronomy and Astrophysics at Peking University in Beijing report that they caught it about nine days after its brightness peaked. The team have also posted a report at the arXiv preprint server (http://arxiv.org/abs/1507.03010)1.

Using larger telescopes to follow up the sighting, Dong and his colleagues from the United States and Chile estimate that the stellar explosion is the most extreme instance yet of a superluminous supernova. A few dozen of these enormous blasts, one hundred times brighter than ordinary supernovae, have been spotted in the past decade — and ASASSN-15lh is about twice as bright as any of them.

The researchers would not discuss their preliminary findings with Nature because the results are being submitted to a peer-reviewed journal that wishes them not to comment.

Other astronomers have not had the chance to review the work beyond the brief reports posted online, but they say that if the supernova’s properties are confirmed, it is a particularly puzzling object. It belongs to a group of superluminous supernovae that are low in hydrogen, making it hard to understand the source of their tremendous energy.

One hypothesis is that low-hydrogen supernovae are powered by magnetars: extremely magnetized, rapidly-spinning neutron stars left behind by the supernova explosion, says Edo Berger, who researches superluminous supernovae at Harvard University in Cambridge, Massachusetts. But other astronomers, including Avishay Gal-Yam who studies supernova at the Weizmann Institute of Science in Rehovot, Israel, say that the supernova is releasing so much energy that even a magnetar might not be powerful enough to produce it. Another possibility is that its output is fed by the energy released from matter spiralling into a black hole.

Also perplexing is that ASASSN-15lh’s host galaxy seems to be very massive and luminous. Until now, superluminous supernovae such as ASASSN-15lh have been found within dwarf galaxies, which are relatively small and dim with meagre stores of elements that are heavier than hydrogen and helium. Astronomers think that these environments help stars to keep up the high rotation rates that they need to become magnetars.

Astronomers such as Berger are training their telescopes on the supernova, with the aim of pinning down its location within its host galaxy and tracking its brightness as it fades over the coming months. This could help astronomers to understand the engine that is powering ASASSN-15lh.

There has been a boom in superluminous supernova discoveries, thanks to a new generation of automated sky surveys that take in data from wide swathes of the sky, rather than singling out particular, bright galaxies for observation.

A dozen new superluminous supernovae might be spotted this year alone from projects such as the Dark Energy Survey, also at Cerro Tololo; the Intermediate Palomar Transient Factory telescope near San Diego, California; and the Panoramic Survey Telescope and Rapid Response System (Pan-STARRS) telescope in Hawaii.

By 2022, the Large Synoptic Survey Telescope in Chile should start photographing the entire southern sky every three nights — so ASASSN-15lh may not be the record-holding supernova for long.