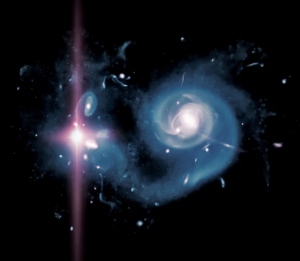 Simulation of an early galaxy hosting a superluminous supernova.

A superluminous supernova may sound like a designation dreamed up by someone with a penchant for hyperbole, but such explosions are deserving of the extravagant language. They are very big blasts—and two newfound examples originated in the very distant past.

Astronomers using two telescopes atop Mauna Kea in Hawaii have discovered a pair of supernovae that occurred more than 10 billion years ago, when the universe was less than a quarter of its present age. The older, and hence more remote, of the two supernovae ranks as the most distant such event known.

The researchers were able to spot the ancient stellar explosions, whose light has only just reached Earth, because of the extreme luminosity of the supernovae—the newly discovered blasts may signal the cataclysmic death of giant stars more than 100 times as massive as the sun. Although such superluminous explosions have been detected in the relatively nearby universe, they ought to be more common in the early universe, when massive stars were more numerous.

Jeff Cooke of the Swinburne University of Technology in Australia and his colleagues reported the discoveries in a study published online October 31 in Nature. (Scientific American is part of Nature Publishing Group.) The supernovae pair, which have been designated SN 2213-1745 and SN 1000+0216, were identified from deep-sky images taken at the 3.6-meter Canada—France-–Hawaii Telescope between 2003 and 2008. The researchers then used the 10-meter Keck I telescope to make spectral measurements of the galaxies where the supernovae were discovered, which revealed precise distance measurements for both host galaxies.

Cosmologists and astrophysicists gauge cosmic distance using redshift, a measure of how much light has been stretched toward longer wavelengths as it propagates across an expanding universe. SN 2213-1745 lies at a redshift of 2.05, which implies that the supernova’s progenitor star exploded 10.4 billion years ago. (The universe is now about 13.7 billion years old.) The extreme brightness and slow fading of SN 2213-1745 match up well with the properties expected of a so-called pair-instability supernova, the death of a giant star brought on by energetic gamma rays giving off pairs of matter and antimatter particles. The star that exploded as SN 2213-1745 may have been as massive as 250 suns, the researchers estimate.

SN 1000+0216, which lies at a redshift of 3.9, went off some 12 billion years ago. The discovery smashes the record held by a supernova identified by Cooke and his colleagues in 2009 at redshift 2.36, which corresponds to a light-travel time of about 11 billion years. The new record holder may also be a kind of pair-production supernova, Cooke and his colleagues report, but the data on the distant cataclysm are too limited to determine the exact mechanism behind the luminous blast.