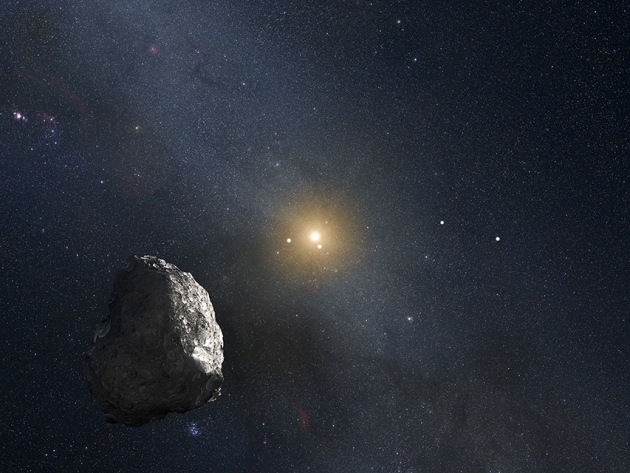 An artist’s conception of the view from the outer Solar System.

Astronomers have spotted a distant world that orbits far beyond Pluto, in the extreme reaches of the Solar System.

The object, known informally as L91, may be in the process of gradually shifting its way inward from the Oort cloud — a reservoir of comets and other icy bodies — into the nearby, equally icy Kuiper belt. No object has ever been seen doing this.

The discovery of L91 reveals more about the extreme worlds whose orbits lie beyond the gravitational influence of Neptune, the most distant giant planet in the Solar System. Researchers have yet to fully explain how these bodies end up in their current orbits. “Every time we find another one of these objects, it adds another piece to the puzzle,” says Meg Schwamb, a planetary scientist at the Gemini Observatory in Hilo, Hawaii.

Astronomers with the Outer Solar System Origins Survey discovered L91 in September 2013 using the Canada–France–Hawaii Telescope in Hawaii. The group has been conducting a detailed survey of a small portion of the sky, aiming to catalogue and describe the Kuiper-belt objects within it.

L91’s elliptical orbit never brings its closer to Earth than about 50 times the Earth–Sun distance (or 50 astronomical units, au). At its farthest, the object is 1,430 au away. That means its orbit is more stretched out, and centred farther from the Sun, than previously discovered worlds such as Sedna and 2012 VP113.

The location and trajectory of L91 make it “fascinating”, said Michele Bannister, an astronomer at Queen’s University Belfast, UK. She reported the finding on 17 October at a joint meeting of the American Astronomical Society’s Division for Planetary Sciences and the European Planetary Science Congress.

L91 may have been tossed into its remote orbit by gravitational interactions with Neptune in the distant past. “This one is right on the hairy edge of everything,” says Nathan Kaib, an astronomer at the University of Oklahoma in Norman.

Bannister and her colleagues think the object may have been banished as far as 2,000 au from the Sun before it began easing its way back towards the star’s gravitational pull. L91’s orbit “is changing in quite a remarkable way”, she said.

But Konstantin Batygin, an astronomer at the California Institute of Technology in Pasadena, isn’t so sure. He thinks Bannister’s suggestion that L91 was first tossed towards the Oort cloud and is now moving inward is too complicated. He argues that an unseen giant planet — such as Planet Nine, which he and a colleague proposed in January — might instead be shepherding L91’s orbit more simply and directly.

Bannister counters that L91 travels an orbit that is almost within the plane of the Solar System, rather than being tilted at high angles, as might be expected if it were being battered around by a Planet Nine.