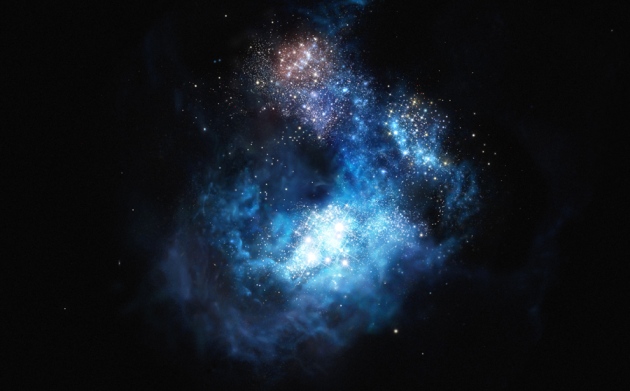 An artist’s impression of CR7, a distant galaxy that may contain primordial stars.

Some of the first generation of stars, whose explosions breathed carbon, oxygen and other elements into the Universe, may have been glimpsed for the first time.

Such objects are theorized to be hundreds of times larger than the Sun, and made up only of pristine hydrogen, helium and traces of lithium left over from the Big Bang. The earliest of them formed during the first few hundred million years of the Universe, living for only a few million years before exploding in supernovae that laid the seeds for the more element-rich stars to come. But they have never been seen.

Now astronomers think that they have spied a late-blooming cluster of such stars, in the brightest distant galaxy yet observed. The stars, seen as they were when the Universe was around 800 million years old (a mere 6% of its current age), seem to be primordial in composition — but also to have formed more recently than some second-generation stars.

If the findings are confirmed, it would mean that these elusive monsters are easier to detect than astronomers thought. “Until now, work on these stars has been completely theoretical,” says David Sobral, an astronomer at the University of Lisbon who led the work. "For the first time, we’re starting to get observations that can test the many theories about these stars and begin to understand how they formed." The work is posted on the pre-print server arXiv1 and has been accepted for publication in The Astrophysical Journal.

Seeing these ancient stars involves observing very distant galaxies. Their light takes billions of years to reach us, and so shows the Universe in its earliest days. But the light is faint, making it difficult to spot. The short lifetimes of the first stars, which formed in relatively low-mass clouds of gas and quickly ran their course, also makes them hard to find.

The surprise discovery emerged after Sobral and an international team of astronomers made a wide sweep of the sky using the Subaru Telescope on Mauna Kea in Hawaii. They used three further telescopes to peer into particularly bright galaxies, and found an intriguing signal from one that they named COSMOS Redshift 7. (The name was chosen to have the abbreviation CR7, after the nickname of Portuguese footballer Cristiano Ronaldo.)

The spectrum of light from CR7 showed evidence of ionized helium, which suggested that the source of the light was extremely hot. At such temperatures, any carbon and oxygen present should also have ionized, says Sobral. But there was no sign of these elements in the light, which strongly suggested that it came from the first generation of stars. These are called Population III stars, because they were hypothesized after astronomers had got used to a classification system that divided stars into two populations.

But the galaxy is not where astronomers had imagined they would find the Universe’s earliest stars. CR7 also hosts second-generation stars, made from material spat out by dying first-generation stars. Sobral and his colleagues suggest that the primordial stars may be late developers, formed from a cloud of pristine and uncontaminated gas that was prevented from cooling and coalescing by the heat of strong radiation from earlier-blooming stars. “We think we're seeing the last episode of Population III star formation,” he says.

That primordial stars should turn up in a large and evolved galaxy presents a challenge to the group’s interpretation, but is probably the least exotic of the possible explanations for CR7’s light signal, says Naoki Yoshida, an astrophysicist at the University of Tokyo. Further observations of the galaxy will be needed to rule out other possibilities, admit the authors. One alternative, that the emission comes from a supermassive black hole that formed directly from the collapse of a pristine cloud of gas, would actually be “even more spectacular”, adds Sobral.

Until now, many astronomers believed that seeing the first generation of stars would take an instrument such as NASA’s James Webb Space Telescope, which is projected to cost nearly US$9 billion, is scheduled to launch in 2018 and should have the power to look further back in time than any previous instrument. But if Sobral and his colleagues are right, it may be possible to see primordial stars with existing telescopes. Indeed, similar bright galaxies have already been identified as potential candidates, adds Sobral. “We may already be looking at them.”