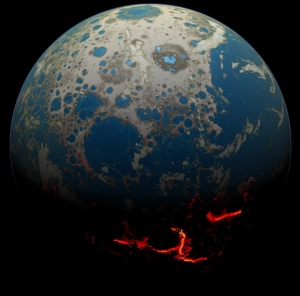 Pummelled by large impacts, the early Earth's surface would have been obliterated by molten rock.

The early Earth is likely to have been hit by up to four asteroids capable of killing off fledgling life and completely resurfacing the planet, a model reveals.

Researchers have long speculated about the conditions on Earth in the first 500 million years after the planet's formation, some 4.5 billion years ago. Impact scars on Mars, the Moon and Mercury suggest that the entire inner Solar System was bombarded by asteroids during that time. But melting and reforming of Earth's crust has wiped clean any sign of early impacts, making it difficult to work out how often asteroids hit or how big they were — and what their consequences were for the planet's geology and life.

A team led by Simone Marchi, a planetary scientist at the Southwest Research Institute in Boulder, Colorado, has now used the Moon's crater record to develop a computer model1 of Earth's bombardment history.

The picture it paints is stunning, says Henry Melosh, a geophysicist at Purdue University in West Lafayette, Indiana: it suggests that the energy delivered by several of the larger impacts would have been enough to vaporize the young Earth's oceans and completely remodel its surface. “This paper shows the way for what will probably become a new thread in research on the environment and geology of the early Earth,” says Melosh.

Although the idea behind Marchi's model is not entirely new, his team's simulation is more detailed than previous attempts to translate the Moon’s history to Earth. It combines sophisticated impact simulations with theories of planetary formation and data from samples of lunar2 and terrestrial3 rocks, says Melosh.

The team was able to estimate the total volume of asteroids that hit Earth and the Moon using measurements of the abundance of elements such as gold and osmium in their crusts. If these elements had been present when the Moon split violently from Earth 4.5 billion years ago, they would have sunk to the bodies' cores — so any such elements in the crusts and mantles must have been delivered by asteroid impacts since then. By comparing the relative abundances of the two elements in Earth and Moon rocks, the team was able to estimate the number of very large impacts that might have hit Earth, but could not have smacked into the Moon without obliterating it.

Simone Marchi tells Elizabeth Gibney how scientists are looking to the Moon to estimate the power of ancient asteroid impacts on Earth.

In comparison with Earth's mass, the amount of rock hitting the planet would have been tiny. But it would have had an enormous effect on Earth's surface, says Marchi. A 10-kilometre-wide asteroid was enough to kill the dinosaurs, and studies4 show that one 500 kilometres across would vaporize all of the planet's oceans. “At 1,000 kilometres, the effects would be so wide the planet would probably be completely resurfaced with material from the mantle,” he says.

This would mean “episodes of complete sterilization of Earth”, he adds. Marchi says that statistically at least, it would have been difficult for life to thrive before 4.3 billion or 4.2 billion years ago, although extremely heat-resistant bacteria could have survived.

Such predictions will have to be worked into studies that try to establish when life first started on Earth, says Oleg Abramov, an astrogeologist at the US Geological Survey in Flagstaff, Arizona.

The earliest hint of life on Earth is 3.8 billion years old5. But there is an increasing consensus that Earth developed oceans more than 4 billion years ago, based on the composition of tiny flecks of ancient zircon minerals found in several areas, including the Jack Hills of western Australia. This suggests that the planet could have been habitable then, says Abramov.

John Valley, a geochemist at the University of Wisconsin–Madison, says that the study does not show definitively that Earth was uninhabitable 4.3 billion years ago. He points out that the effects of each impact would have been short-lived, leaving habitable spells between blasts, and impacts would not necessarily have melted the entire surface of the planet. Life could have started multiple times, or existed in rocks more than 1 kilometre below the oceans, he adds.

And if Marchi's model is correct, it could solve another riddle about the early Earth, Abramov says. The simulations predict a spike in asteroid impacts around 4.1 billion years ago, which correlates with the age of the majority of known zircon samples. The authors suggest that the zircons could have been created when large portions of Earth’s surface were buried by asteroid impacts, an idea that Abramov says “has a lot of merit”.

Marchi hopes that studies of Earth habitability and how plate tectonics began will start to use the model as a tool to account for the effects of bombardment, rather than treating Earth as an isolated orb in space.