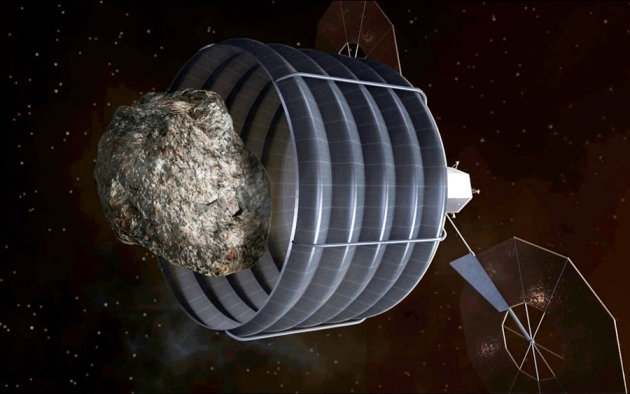 NASA’s asteroid-capture spacecraft (concept illustration) would envelope a 10-metre-wide rock in an inflatable bag and tug it close to the Moon.

NASA has plans to grab an asteroid and tow it near to the Moon for astronauts to visit. But finding a target space rock may be the agency’s biggest challenge. Only a handful of known asteroids would suit NASA’s requirements, and current sky surveys are not tuned to find many more candidates.

“There’s great scepticism, among both the science community and the public, that this can actually be pulled off,” says Jim Bell, a planetary scientist at Arizona State University in Tempe, who attended a workshop on 9 July at the US National Academy of Sciences in Washington DC. The workshop marked the first chance for asteroid scientists to voice their doubts to NASA officials.

US President Barack Obama proposed the asteroid initiative in April, as part of his 2014 budget request to Congress. If the mission gets funded, NASA would expand its surveys for large, hazardous space rocks so that the agency might find an asteroid that is small enough, solid enough and on a trajectory that would allow it to be met by a spacecraft launching as early as 2017.

Details of the mission remain fuzzy, but at the workshop, scientists revealed the first hard numbers on how many asteroids might be suitable to snatch. Of the more than 10,000 known near-Earth asteroids, 370 are small enough for capture, at roughly 10 metres across, says Paul Chodas, an asteroid tracker at NASA’s Jet Propulsion Laboratory in Pasadena, California. But of those 370, only 14 have a suitable orbit. Just four have been studied well enough for scientists to know something about the bodies’ surface texture and spin rate. NASA wants to find a cohesive body spinning at less than two revolutions per minute, to minimize the risk of any damage to the spacecraft.

If NASA picks up the pace of its sky surveys, astronomers should find at least 15 more 10-metre targets over the next three to four years, says Chodas, and at least half of those are likely to be in the right orbit. But that would require the agency to boost funding to the survey programmes, which currently focus on finding rocks that are 140 metres across or larger. To spot 10-metre-class rocks, “we have to go fainter”, says Timothy Spahr, director of the Minor Planet Center in Cambridge, Massachusetts, which catalogues near-Earth asteroid discoveries. Going fainter means, for instance, adding two more cameras to the Catalina Sky Survey, based at the University of Arizona in Tucson. The survey has discovered most of the small near-Earth asteroids so far. These cameras — planned for mid-2014 — would double the survey’s field of view and increase the chances of catching a faint small object, says Spahr.

NASA also plans to restart the Wide-field Infrared Survey Explorer, a spacecraft that has been in hibernation since 2011, to hunt for more asteroids. Two facilities slated for Hawaii — the Pan-STARRS-2 telescope and the ATLAS telescope array — could also add to the effort.

The extra eyes are crucial because near-Earth asteroids often vanish from view within days of a sighting. On discovery, astronomers must quickly marshal follow-up observations with radar and infrared telescopes to learn more about the rock’s size, shape and composition.

Engineers at NASA’s Johnson Space Center in Houston, Texas, are already working on several mission designs for the robotic capture craft, which would need to grapple with an asteroid weighing around 400 tonnes — about the mass of the International Space Station (ISS). The xenon-ion thrusters used to get to the asteroid, and the inflatable rip-resistant bag used to capture it, are straightforward components. The bigger issue is finding a target and building the spacecraft in time for launch, says Andrew Thomas, an astronaut at Johnson who works on the project. “It’s pretty brazen, if you think about it,” he says.

A 2017 launch would allow the spacecraft to drag the target asteroid to a position near the Moon by 2021. In theory, astronauts could then visit the asteroid, peel back or cut the bag and take rock samples back to Earth.

NASA expects the mission to cost between US$1 billion and $2.6 billion. Agency officials are careful to emphasize that the goal is not science, but rather to give astronauts practice in going into deep space, where they must contend with harsher radiation environments than on missions to the ISS. “If our goal is to get to Mars in the 2030 time frame, we’re going to have to be aggressive with this upfront stuff,” says William Gerstenmaier, NASA’s associate administrator for human exploration and operations.

It is not yet clear whether Obama’s plan will be paid for by Congress, which has been locked in a battle with the administration over agency goals ever since NASA gave up former President George W. Bush’s vision of returning to the Moon (see Nature 492, 161–162; 2012). A bill proposed by a congressional subcommittee on space in the Republican-dominated House of Representatives would cancel all funding for the asteroid initiative.