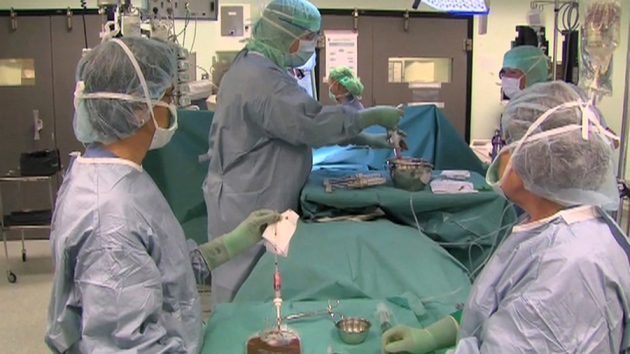 A famed surgeon committed scientific misconduct in his reports of how he transplanted synthetic windpipes seeded with stem cells into patients, according to an independent investigator.

The investigator found that six published papers authored by Paolo Macchiarini, a thoracic surgeon at the Karolinska Institute in Stockholm, had misrepresented data from recipients of the artificial windpipes, or tracheas. The papers made the pioneering transplant operation sound more successful than it was, said the investigator, who was commissioned by the prestigious Karolinska Institute to examine Macchiarini's clinical procedures.

The investigation also found that two of the papers1, 2 described operations that had not received the necessary ethical approval, and that a seventh paper3, also authored by Macchiarini, reporting transplantation of artificial oesophagi into rats, had misrepresented results, too.

He will now have two weeks to formally respond to the 39-page report, which was written by Bengt Gerdin, a general surgeon and professor emeritus at Uppsala University in Sweden.

Macchiarini’s research had been hailed as a bright spot in the field of regenerative medicine, which has been frustratingly slow to deliver on its promise of allowing synthetic materials to act as replacements for natural organs. His procedure involved bathing a specially made polymer shaped like a trachea in stem cells taken from the transplant-recipient’s bone marrow. The idea was that when this was transplanted to replace a damaged trachea, the cells would form the necessary type of tissue and create a seal with the surrounding tissue.

Macchiarini has put such artificial tracheas into eight people. The papers under investigation relate to just three of them, and report that there were some signs that the synthetic tracheas had successfully integrated. Two of those transplant recipients have since died, and one spent time in intensive care after the procedure. Macchiarini has previously told Nature’s news team that the problems faced by the patients were unrelated to the transplants.

The investigation began after four physicians at Karolinska who were involved in the care of those three patients filed complaints. The physicians — Karl-Henrik Grinnemo, Matthias Corbascio, Thomas Fux and Oscar Simonson — provided medical records that they alleged to be at odds with the published results, and called into question the paper on the rat model.

In some instances, publications claimed improvement in patients even though there was no evidence of an examination. “This is falsification,” says Gerdin. Speaking of Macchiarini, he adds: “The basic rule in science is to have all reports documented, but he doesn’t have them.”

In the rat-model paper, Macchiarini reported weight-gain data and computed-tomography (CT) data that suggested that the graft was more successful in the rats than it actually was, says Gerdin.

Gerdin concludes that the misrepresentations were deliberate. “If there is a mistake once, you might think it is random. If it happens several times, you begin to question whether it really is random,” he says.

The investigation focused on Macchiarini, but Gerdin notes that Grinnemo, Corbascio and Simonson were co-authors of one of the papers2 included in the investigation involving a patient, and that Grinnemo was also a co-author of a second1. “I’m not saying they share the responsibility, but one has to ask what they knew and what they didn’t know,” says Gerdin.

The three physicians did not respond to a request for comment, but Corbascio had previously told Nature that he was involved only “at a superficial level” with the transplant recipient. “I had complete confidence in Macchiarini,” he said.

Nature’s news team contacted two of the journals that published the papers (the journals were not the focus of the investigation).“We take all concerns regarding published research extremely seriously," says Joerg Heber, executive editor of Nature Communications, which published the rat-model paper3. "It is important that we carefully consider the report and the responses of the various parties in order to ensure that we act appropriately. We cannot comment further at this stage.” (Nature Communications is published by Nature Publishing Group, which also publishes Nature).

A spokesperson for The Lancet, which published two of the seven papers1, 4, said that the journal's editors were aware that the investigation had concluded, but would wait to comment until the English translation was released.

Separately, on 9 April, the Swedish Medical Products Agency (MPA) filed a complaint with the Swedish state prosecutor over whether proper permission was obtained to carry out the three synthetic tracheal transplants that feature in Gerdin’s investigation. The operations took place at the Karolinska. Ann Marie Janson Lang, a clinical assessor in the clinical-trials department of the MPA, says that the synthetic tracheas meet the definition of an “advanced therapy medicinal product”, which requires agency permission before it can be given to patients, but that no application for a permit was made.

It is not clear who would bear responsibility for the breach, if it is confirmed. Macchiarini told Nature that, as a visiting professor at the Karolinska, “it was never my responsibility to obtain any necessary permissions. I was not directed to do so, nor did I have the authority to do so.”

On 27 May, the Karolinska Institute posted a statement on its website that acknowledges that “no written application was made and no permit was issued” to carry out the three operations in question. The statement further explains that the decision to perform the procedures was based on a conclusion that they were necessary to save the patients’ lives.

This story has been updated since it was originally posted to include new information.