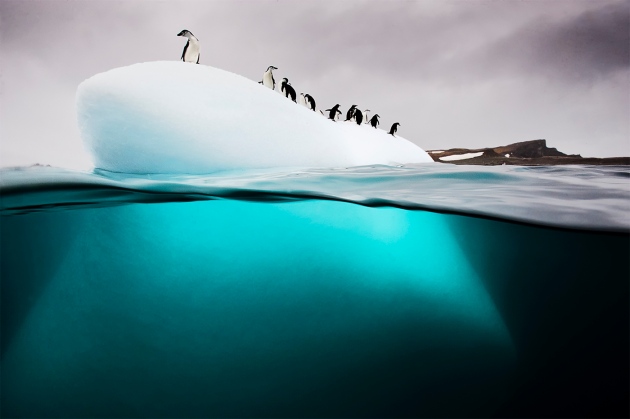 Antarctic ecosystems will be affected by warming waters.

The future has come to a small patch of the Antarctic sea floor, courtesy of an experiment that placed electric heating pads on the ocean's bottom. The pioneering trial is one of the most realistic and technically challenging ocean-warming experiments yet performed, researchers say — and it opens up a new avenue to explore how warming oceans affect marine ecosystems.

In the past 40 years, the surface waters of Earth’s oceans have warmed by some 0.4 °C on average as a result of climate change. And if greenhouse-gas emissions continue at their current pace, models forecast that the warming could reach up to 2 °C by 2100.

But researchers know little about how ocean ecosystems will respond and adapt as a result — and uncertainties are largest in polar regions where there are few field data, says study co-author Gail Ashton, a marine ecologist with the Smithsonian Environmental Research Center in Tiburon, California.

That data gap spurred Ashton and her colleagues to carry out the artificial warming experiment in Antarctica. They began in 2014, when scuba divers dug trenches, laid cables and installed 12 panels 15 metres under water on flat sea bed near the Rothera Research Station of the British Antarctic Survey (BAS), which is on a small island off the west coast of the Antarctic Peninsula. Four panels were heated so that they were always 1 °C above the ambient temperature — which in the region varies from around –2 °C to +2 °C during the year — and four were heated to 2 °C above ambient temperature. The remaining four were left unheated, as controls. 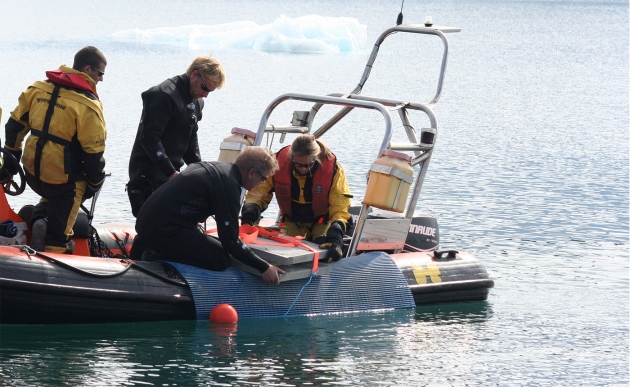 A team of researchers laid heating pads on the Antarctic sea floor to investigate warming.

Using cameras, the divers then monitored how microorganisms — of the kind that encrust wet surfaces and biofoul underwater pipes — colonized the panels. The species, including microscopic invertebrates and sponges, represented typical sea-bed fauna in the region. The experiment was supposed to run for two years but ended after nine months, when icebergs damaged power-supply cables. Still, researchers saw significant and surprising differences between the panels, says Ashton. “I had hoped we might be able to see some subtle differences after careful image analysis,” she says. “But I would never have expected that the warming effects would be so easily discernible with the human eye.”

Metabolic theory predicts that biological growth rates increase by around 10% for every 1 °C of warming. But some species grew twice as fast on the heated panels as they did on the controls, Ashton and her colleagues report in Current Biology1. Distinctly different animal communities settled on the heated surfaces. On the 1 °C set, a species called Fenestrulina rugula — a kind of filter-feeding invertebrate called a bryozoan — so dominated the fauna that the diversity of all the species on the panel was reduced.

“The results are very exciting and provocative,” says Craig Smith, a marine ecologist at the University of Hawaii at Manoa. “They suggest that climate warming in the next 50 years in Antarctica could substantially alter the unique diversity of Antarctic ecosystems.”

Experimenters have struggled in the past to study the effects of ocean warming in a controlled experiment, in which one area of sea is deliberately and uniformly warmed relative to another over a long period of time. Previous ocean tests have compared coastal areas with nearby regions that receive extra heat from local power plants. And one effort in 2010 used electric panels to heat a small section of water in western Australia, but the animals being studied quickly grew big enough to leave the warmed water layer.

Researchers worry that Antarctic species — adapted to cold waters — may suffer as waters warm. The results suggest that species at the bottom of the marine food web are able to cope with one or two degrees of warming, Ashton says, particularly given that it happens over decades. However, species-richness or diversity might be affected, and some species might grow to dominate others. Ashton says she would also like to know what the knock-on effects will be for other creatures.

“We do need more reliable field data to validate and interpret lab experiments on how environmental change affects life in the seas,” says Hans-Otto Pörtner, an ecologist at the Alfred Wegener Institute of Polar and Marine Research in Bremerhaven, Germany. “As yet, we have only a sketchy knowledge of what controls the success of species.” 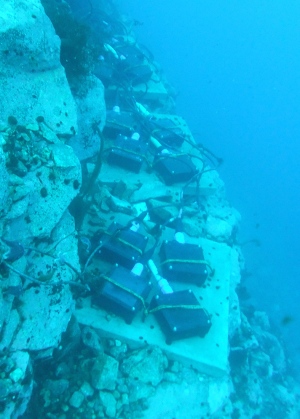 The heated pads encouraged faster microorganism growth than did controls.

Others agree that carefully designed controlled-warming experiments such as Ashton’s are the way to go, although Smith says they should ideally be run for longer, with more replications.

One caveat, he cautions, is that the panels warmed only a roughly 2-millimetre-thick layer of water. The rest of the water column — which would have contained larvae and food on which the animals in the experiment depend — remained colder. So the results aren’t a perfect predictor of how sea-floor communities might change, he says.

Furthermore, the results can’t be generalized to suggest what will happen in other seas, says Simon Morley, a marine biologist with the BAS in Cambridge, who took part in the study.

Ashton and Morley plan to do more warming experiments in other polar environments. In September, Morley will look for a suitable test site near the Canadian High Arctic Research Station in Cambridge Bay. He says he will also apply for money to do similar experiments in tropical waters, and perhaps even freshwater environments.

“More of these experiments need to be done to be able to generalize, and draw wider conclusions,” says Boris Worm, an oceanographer at Dalhousie University in Halifax, Canada. “Each is necessary to challenge our simplistic assumptions about how climate change may alter the world we live in.”