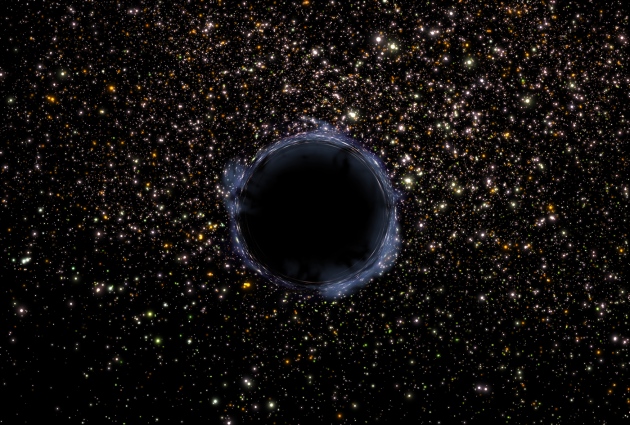 Nothing, not even light, can escape the event horizon of a black hole.

Black holes are not actually black. Instead, these gravitational sinks are thought to emit radiation that causes them to shrink and eventually disappear. This phenomenon, one of the weirdest things about black holes, was predicted by Stephen Hawking more than 40 years ago, creating problems for theoretical physics that still convulse the field.

Now, after seven years of often solitary study, Jeff Steinhauer, an experimental physicist at the Technion-Israel Institute of Technology in Haifa, has created an artificial black hole that seems to emit such ‘Hawking radiation’ on its own, from quantum fluctuations that emerge from its experimental set-up.

It is nearly impossible to observe Hawking radiation in a real black hole, and previous artificial-black-hole experiments did not trace their radiation to spontaneous fluctuations. So the result, published on 15 August1, could be the closest thing yet to an observation of Hawking radiation.

Steinhauer says that black-hole analogues might help to solve some of the dilemmas that the phenomenon poses for other theories, including one called the black-hole information paradox, and perhaps point the way to uniting quantum mechanics with a theory of gravity.

Other physicists are impressed, but they caution that the results are not clear-cut. And some doubt whether laboratory analogues can reveal much about real black holes. “This experiment, if all statements hold, is really amazing,” says Silke Weinfurtner, a theoretical and experimental physicist at the University of Nottingham, UK. “It doesn’t prove that Hawking radiation exists around astrophysical black holes.”

It was in the mid-1970s that Hawking, a theoretical physicist at the University of Cambridge, UK, discovered that the event horizon of a black hole — the surface from which nothing, including light, can escape — should have peculiar consequences for physics.

His starting point was that the randomness of quantum theory ruled out the existence of true nothingness. Even the emptiest region of space teems with fluctuations in energy fields, causing photon pairs to appear continuously, only to immediately destroy each other. But, just as Pinocchio turned from a puppet into a boy, these ‘virtual’ photons could become real particles if the event horizon separated them before they could annihilate each other. One photon would fall inside the event horizon and the other would escape into outer space.

This, Hawking showed, causes black holes both to radiate — albeit extremely feebly — and to ultimately shrink and vanish, because the particle that falls inside always has a ‘negative energy’ that depletes the black hole. Most controversially, Hawking also suggested that a black hole’s disappearance destroys all information about objects that have fallen into it, contradicting the accepted wisdom that the total amount of information in the Universe stays constant. 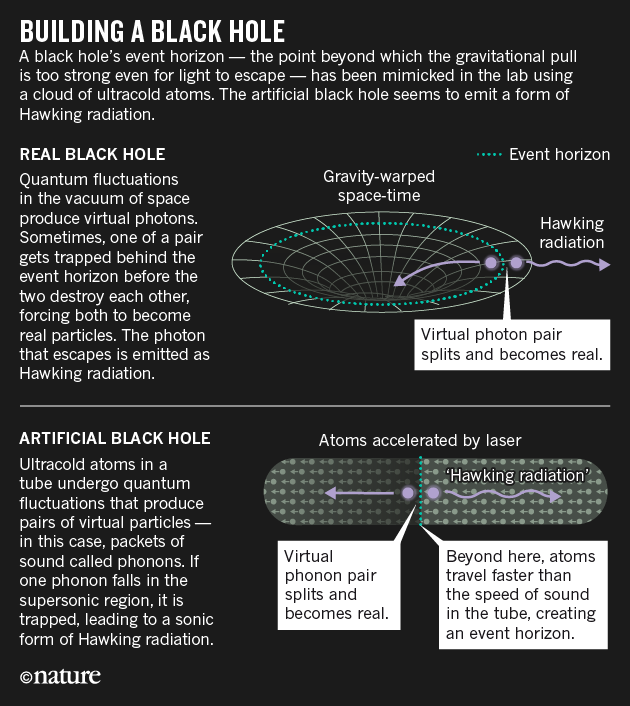 In the early 1980s, physicist Bill Unruh of the University of British Columbia in Vancouver, Canada, proposed a way to test some of Hawking’s predictions2. He imagined a medium that experienced accelerated motion, such as water approaching a waterfall. Like a swimmer reaching a point where he cannot swim fast enough away to escape the waterfall, sound waves that are past the point in the medium that surpasses the speed of sound would become unable to move against the flow. Unruh predicted that this point is equivalent to an event horizon — and that it should display a sonic form of Hawking radiation.

Steinhauer implemented Unruh’s idea in a cloud of rubidium atoms that he cooled to a fraction of a degree above absolute zero. Contained in a cigar-shaped trap a few millimetres long, the atoms entered a quantum state called a Bose–Einstein condensate (BEC), in which the speed of sound was just half a millimetre per second. Steinhauer created an event horizon by accelerating the atoms until some were travelling at more than 1 mm s−1 — a supersonic speed for the condensate (see ‘Building a black hole’).

At its ultracold temperature, the BEC undergoes only weak quantum fluctuations that are similar to those in the vacuum of space. And these should produce packets of sound called phonons, just as the vacuum produces photons, Steinhauer says. The partners should separate from each other, with one partner on the supersonic side of the horizon and the other forming Hawking radiation.

On one side of his acoustical event horizon, where the atoms move at supersonic speeds, phonons became trapped. And when Steinhauer took pictures of the BEC, he found correlations between the densities of atoms that were an equal distance from the event horizon but on opposite sides. This demonstrates that pairs of phonons were entangled — a sign that they originated spontaneously from the same quantum fluctuation, he says, and that the BEC was producing Hawking radiation.

By contrast, radiation that he observed in an earlier version of the set-up had to be triggered rather than arising from the BEC itself3, whereas a previous experiment in water waves led by Unruh and Weinfurtner did not attempt to show quantum effects4.

“For sure, this is a pioneering paper,” says Ulf Leonhardt, a physicist at the Weizmann Institute of Science in Rehovot, Israel, who leads a different attempt to demonstrate the effect, using laser waves in an optical fibre. But he says that the evidence of entanglement seems incomplete, because Steinhauer demonstrated correlations only for phonons of relatively high energies, with lower-energy phonon pairs seemingly not correlated. He also says he’s not confident that the medium is a true BEC, which, he says, means that there could be other types of fluctuation that could mimic Hawking radiation.

Also unclear is what analogues can say about the mysteries surrounding true black holes. “I don’t believe it will illuminate the so-called information paradox,” says Leonard Susskind, a theoretical physicist at Stanford University in California. In contrast to the case of astrophysical black holes, there is no information loss in Steinhauer’s sonic black hole because the BEC does not evaporate.

Still, if Steinhauer’s results were confirmed, it would be “a triumph for Hawking, perhaps in the same sense that the expected detection of the Higgs boson was a triumph for Higgs and company”, says Susskind. Few doubted that the particle existed, but its discovery in 2012 still earned Peter Higgs and another theorist, François Englert, who predicted it, a Nobel prize.