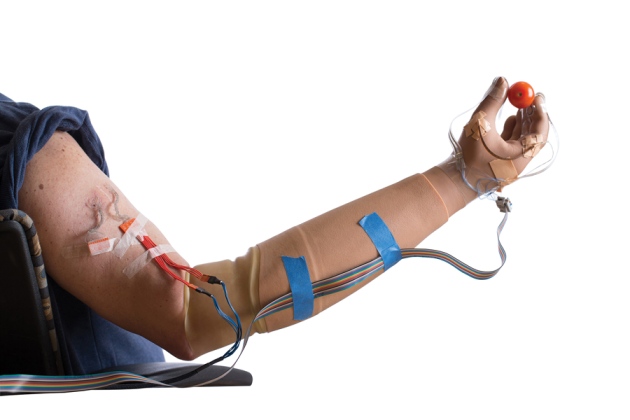 Powered prosthetic hands and arms have advanced little in the last 50 years. Their appearance and structure have improved, but advances in underlying function and control have been harder to come by.

"They are both addressing big limitations that current prostheses have," says Kevin Otto, a biomedical engineer at the University of Florida in Gainesville.

Modern prosthetic hands and arms can often be moved by electronics that record movements of wearers' muscles, and attempts have been made to provide rudimentary sensory feedback. Researchers have tried to replace the missing tactile sense by stimulating the wearer's remaining nerves with regular trains of identical electrical pulses when the prosthetic is touched in certain ways. Wearers tend to report buzzy or tingly feelings that can sometimes be used as feedback to guide their prosthetics. But many people find the unnatural sensations distracting or even unpleasant in the long term.

Dustin Tyler, a neural engineer at Case Western Reserve University in Cleveland, Ohio, and his colleagues achieved better results in two trial participants by delivering patterned pulse trains that varied in intensity over time1. "It went from this tingling sensation to natural pressure," he says.

The researchers outfitted the participants' artificial fingertips with pressure sensors, whose signals could be translated into an electrical stimulation pattern mimicking what an intact person would normally feel. Different stimulation patterns elicited different sensations, including tapping, constant pressure and light, moving touch.

To see whether these sensations could be used to better control prosthetic limbs, Tyler asked the study participants to try taking the stems off of a pile of cherries. Typically, hand amputees struggle with such tasks: without tactile feedback, they grip items either too hard or too softly. Without touch sensation, the participants in this trial managed to successfully de-stem only 77% of the cherries. With tactile feedback, their success rates shot up to 100%.

"It's an important advance," says Gerald Loeb, a biomedical engineer at the University of Southern California in Los Angeles. But he says that Tyler's current design is "probably too precarious to be used in long-term clinical usage".

To connect the nerves to the stimulator, wearers of the prosthetics must have electrodes implanted in their upper arms, with connections exiting through the skin — which leaves the implant site vulnerable to skin infection or electrode damage. With careful attention, the two study participants have been able to keep their implants for about two years, but Tyler says that his team is working on shrinking the stimulator so that it can one day be implanted completely under the skin — much like a pacemaker.

Improving sensory feedback from prosthetic arms allows users to complete controlled tasks, such as removing the stems from a bowl of cherries.

In a second paper2, Max Ortiz Catalan, a biomedical engineer at Chalmers University of Technology in Gothenburg, Sweden, and his colleagues report improved ways of selecting and transmitting motor commands for artificial limbs.

Conventional prosthetic-arm systems decipher a wearer's intended movements by recording muscle activity through the skin. The approach is non-invasive, but the layers of tissue and skin between the muscle and the sensor tend to distort the motor signal — impairing the controllability of the prosthesis. The external electrodes can also behave differently or fail depending on skin temperature and moisture.

To access the muscles' signals directly, Ortiz Catalan elaborated on a prosthetic design that his group, led by orthopaedic surgeon Rickard Brånemark, has pioneered. The system anchors the prosthetic arm directly into the recipient's bone using a titanium connector. Bone tissue tends to grow well around the screw, and the system provides increased stability and range of motion compared with the conventional socket design, which holds the prosthesis on with a sling-like contraption.

In the study, Ortiz Catalan's group passed recording electrodes through the connector, threaded them through the bone, and then implanted them directly into the muscles that would normally help to move the missing limb.

"They have cleverly gotten around a big problem," says Otto. Intramuscular electrodes have previously been used only in animal studies and short-term human experiments.

Ortiz Catalan demonstrated the system in a single person, a lorry driver named Magnus N who has used it since January 2013.

"It feels like a real arm, it's working so well," says Magnus N. His previous prosthetic relied on skin sensors, was harder to control and would often fail in winter weather, he says. The new device can also be moved using only one-fifth of the effort of the old one.

In addition to implanting electrodes in the muscle, the researchers also wrapped an electrode around a nerve in the recipient's stump. This could one day be used to incorporate sensory feedback, although Ortiz Catalan and his colleagues did not explore complex electrical stimuli as Tyler's group did.

"It would have been really great if these two groups worked together," says Otto. "The field is making big jumps right now, and I think these studies are both examples of that."