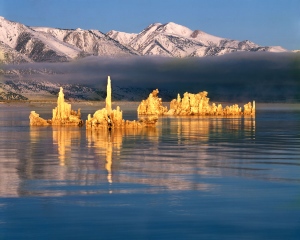 Mono Lake in California is home to bacteria that can tolerate high concentrations of arsenic.

A bacterium that some scientists thought could use arsenic in place of phosphorus in its DNA actually goes to extreme lengths to grab any traces of phosphorus it can find.

The finding clears up a lingering question sparked by a controversial study1, published in Science in 2010, which claimed that the GFAJ-1 microbe could thrive in the high-arsenic conditions of Mono Lake in California without metabolizing phosphorus — an element that is essential for all forms of life.

Although this and other key claims of the paper were later undermined (see 'Study challenges existence of arsenic-based life'), it was not clear how bacteria discriminate between nearly identical molecules of phosphate (PO43-) and arsenate (AsO43-).

Dan Tawfik, who studies protein function at the Weizmann Institute of Science in Rehovot, Israel, and his colleagues have now teased out the mechanism by which some of the bacterial proteins bind to phosphate and not arsenate. The study, published today in Nature2, suggests that just one chemical bond holds the key, and shows that the ‘arsenic-life’ bacteria have a strong preference for phosphorus over arsenic.

“This work provides in a sense an answer to how GFAJ-1 (and related bacteria) can thrive in very high arsenic concentrations,” say Tobias Erb and Julia Vorholt of the Swiss Federal Institute of Technology in Zurich, co-authors of the latest paper, who were also co-authors on a follow-up paper that cast doubt on the initial arsenic-life claims3.

The researchers looked at five types of phosphate-binding protein — which bind phosphate in a molecular pathway that brings it into the cells — from four species of bacteria. Two of the bacterial species were sensitive to arsenate and two were resistant to it. To test how effective these proteins were at discriminating between phosphate and arsenate, the researchers put them in solution with a set amount of phosphate and different concentrations of arsenate for 24 hours, and then checked which of the molecules the proteins would bind to.

Their threshold for when ‘discrimination’ broke down was when 50% of the proteins ended up bound to arsenate — indicating that the ability to discriminate had been overwhelmed. Even in solutions containing 500-fold more arsenate than phosphate, all five proteins were still able to preferentially bind phosphate. And one protein, from the Mono Lake bacterium, could do so at arsenate excesses of up to 4,500-fold over phosphate.

Detailed structures of a phosphate-binding protein from one bacterium — Pseudomonas fluorescens — showed that the arsenate molecule, which is slightly larger than phosphate, distorts and weakens bonds around a hydrogen atom that forms a bridge to the protein. The researchers also found that a mutated version of the protein, in which this bond is altered, was less able to discriminate between phosphate and arsenate.

Tawfik says that he was shocked by how good the proteins were at discriminating between the essential phosphate and the deadly arsenate. This does not mean that arsenate does not get into the bacteria, he points out. “It just shows that this bacterium has evolved to extract phosphate under almost all circumstances.”

The exceedingly high preference for phosphorus found in the key proteins in that species represent “just the last nail in the coffin” of the hypothesis that GFAJ-1 uses arsenic in its DNA, says Tawfik.

The latest paper shows that the “arsenic monster” GFAJ-1 goes to a huge amount of effort, “even more than other life”, to avoid arsenate, says Wolfgang Nitschke from the Mediterranean Institute of Microbiology in Marseilles, France, who co-authored a commentary questioning the conclusion that GFAJ-1 could replace phosphate with arsenate4. “This shows clearly that life doesn’t like arsenate in cytoplasm,” he says.

Felisa Wolfe-Simon, lead author on the original Science paper and now at Lawrence Berkeley National Laboratory in Berkeley, California, says that the new paper “represents the kind of careful study that really helps the community”. However, she points out that this work “doesn’t necessarily rule out an entirely novel mechanism” for arsenate getting into cells. “There’s still a lot of interesting open questions,” she says.