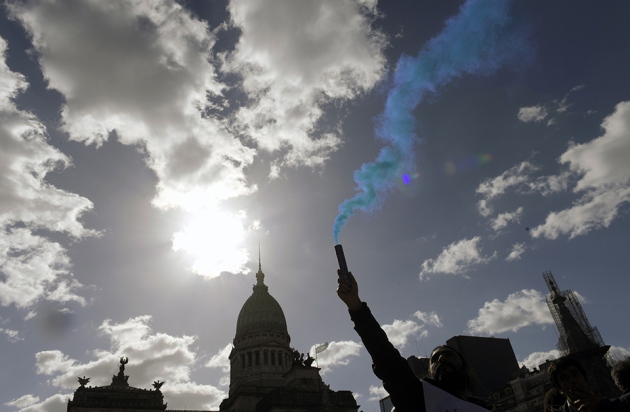 A flare is held in front of Argentina's National Congress during an October protest against science budget cuts.

Researchers in Argentina are incensed about budget cuts that look set to hit the nation’s science ministry especially hard next year — even though President Mauricio Macri pledged to boost science spending when he took office last December.

“Science in Argentina faces a critical situation,” says Dora Barrancos, a gender-issues researcher at the National University of Quilmes in Buenos Aires. She fears that the cuts, after years of budget increases, may presage a return to the troubles of the twentieth century, when scientists fled the country in their thousands. “If young scientists do not have opportunities here, the brain drain is going to restart.”

In September this year, Macri’s government proposed to cut overall science spending to around 32 billion pesos (US$2 billion) in 2017, a fall of around 6% in real terms, according to government estimates of domestic inflation. As part of that proposal, the science ministry would have seen a cut of more than 50% in real terms. In October, scientists poured out onto the streets in protest.

A revamped budget, passed by Argentina’s lower house of parliament on 3 November, has added around 1.3 billion pesos to overall science spending, limiting the damage to around 2%. Still, the science ministry will take a real-terms cut of 36% — and researchers remain unhappy. Argentina’s Senate is due to vote on the budget by the end of November.

Particularly galling is that Macri had promised dramatic increases to the country’s research spending in his campaign. He proposed raising the share of the economy dedicated to science and technology from around 0.6% of gross domestic product in 2014 to 1.5% by 2019. Instead, he has prioritized paying off Argentina’s debt, notes Jorge Aliaga, a physicist at the University of Buenos Aires.

Aliaga also points out that the government's overall budget is rising in real terms. Taking that into account, he argues that the science budget is 8.5% down on where it would be if it had kept pace with overall spending.

Aliaga is part of Science and Technology Argentina (CyTA), a group of concerned scientists who in October coordinated a petition against Macri’s first budget. More than 33,000 researchers and university teachers signed it, and CyTA and university-student associations organized protests in 9 cities, including outside the parliament in Buenos Aires.

The noise got parliament’s attention, and helped prompt the revised budget. But the damage-limitation hasn’t been enough, researchers say. The National Scientific and Technical Research Council (CONICET), a research institute that employs some 9,600 research staff, now gets a 6% real-terms raise to around 10 billion pesos ($660 million). Most of the institute's cash is swallowed up in paying salaries for researchers. It planned to increase its research staff by 10% annually until 2019 — and had hired 920 young researchers this year — but will only be able to pay 400 new staff in 2017. As a result, “young scientists will go abroad, and the setback will be very difficult to revert”, says Andrea Gamarnik, a virologist at the Leloir Institute Foundation in Buenos Aires.

Lorena Coria, a 33-year-old biologist on a CONICET postdoc fellowship to develop oral vaccines for children, is one researcher who applied to be hired by the institute this year — but as a result of the constrained budget, now does not know if she will be taken on. "I know there are good opportunities abroad," she says.

The science ministry takes the worst hit. In particular, its National Agency for the Promotion of Science and Technology, which funds both basic and applied research, had been set for a 60% real-terms budget drop in September’s version of the budget. With November’s parliamentary adjustment, and by borrowing money from credit organizations such as the Inter-American Development Bank, the agency may yet recover some of its lost spending power, says science minister Lino Barañao.

Barañao also insists that there will be no brain drain. He prefers to take the long view, noting that science and technology funding has steadily increased since 2007. And parliamentary budgets do not set funding in stone: this year’s spending on science, for example, looks set to be around 4% higher than the 2016 settlement that was agreed by parliament. The same could happen in 2017, he says.