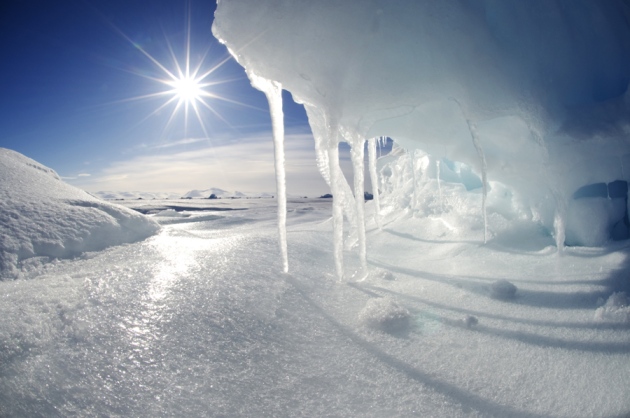 Accelerating snowmelt has seen June Arctic snow cover fall by about two-thirds since 1980.

Arctic snow is fading fast. June snow cover in the Northern Hemisphere has dropped by almost 18% per decade during the past 30 years, according to a study published in Geophysical Research Letters1.

The drop in snow extent will lower the amount of sunlight reflected away from the planet — a process that has a cooling effect — by exposing darker and less reflective soil, shrubs and trees, which absorb solar radiation and re-emit the heat into the atmosphere. The change also stands to warm the permafrost, alter the timing of spring runoff into rivers and lead to earlier plant growth in spring.

“It was a bigger number than we initially thought we might have seen, but when you look at the changes in Arctic sea ice, we would expect a similarly large number,” says Chris Derksen, a cryosphere scientist at Environment Canada in Toronto and a co-author on the paper. The swift pace of the snowmelt between 1979 and 2011 exceeds the rate of decline in Arctic sea ice, which clocked in at just under 11% per decade over the same period. September 2012 saw the the lowest extent of sea ice in the satellite record — and when this year's data were included in calculations, they revealed a 13% per decade decline in sea ice and a 21.5% per decade drop in snow cover.

The links between terrestrial snowmelt and Arctic sea-ice loss are not well understood. “But if you remove snow cover earlier, you’re creating the potential to send warmer air out over the ocean. It can’t be good for sea ice if you lose the snow early,” says Derksen.

Earlier loss of snow cover is likely to accelerate permafrost degradation and could lead to the release of greenhouse gases trapped in the soil. What actually happens will depend on whether a summer is hot and dry or cool and wet, says Peter Kershaw, who studies permafrost at the University of Alberta in Edmonton, Canada. If the peaty surface layers dry out, they insulate the permafrost and protect it from thawing.

Scientists expect the downward trend in spring snow cover to continue, but they don’t know whether the decline will remain so steep. “It would be dangerous to extrapolate by putting lines through dots and continuing in the same direction when we don’t fully understand the mechanisms that are causing the rates of change,” says Martin Sharp, a glaciologist at the University of Alberta.

Derksen says that scientists need to understand why the observed changes do not match up with the projections of widely used models. He found that the snow-cover projections generated by the climate models being used in the Fifth Assessment Report of the Intergovernmental Panel on Climate Change underestimate the extent of spring snowmelt in the Northern Hemisphere. “Even if we’ve become a bit more willing to be aggressive with the scenarios we use to drive these models, it still doesn’t seem to be enough to describe what we’re observing,” says Sharp. “We end up being conservative.”