Building the sphere of Archimedes

Michael Wright reconstructed a fabled machine that Archimedes invented to model the heavens.

A mechanical model of the Universe attributed to the ancient Greek mathematician and polymath Archimedes has been reconstructed after more than two millennia. The metallic globe, which reproduces the motions of the Sun, Moon and planets through the night sky, will be displayed for the first time at an exhibition in Basel, Switzerland, starting on 27 September.

The model, built by Michael Wright, a mechanician and a former curator at the Science Museum in London, is largely the product of erudite guesswork. But astrophysicist Mike Edmunds of Cardiff University, UK, says that it demonstrates that ancients could have been capable of building such a device. It is a reminder, he says, that geared machines in antiquity were probably more complex than historians often assume.

Modern scholars have generally assumed that Archimedes’ sphere — if it existed — displayed astronomical positions on a flat dial. But Wright thinks that it was a 3D globe, and has built the model to demonstrate how it could have worked. “It’s meant to make other people wake up and think,” he says.

Several ancient writers and poets describe mechanical models of the heavens1, and often attribute these to Archimedes. The earliest and clearest description is in a dialogue2 by Roman author Marcus Tullius Cicero in the first century bc. One of Cicero’s characters, Philus describes how the Roman general Marcus Marcellus in 212 bc led an attack on Archimedes' home city of Syracuse (during which the mathematician was killed). As his troops sacked the city, Marcellus took only one thing for himself: Archimedes’ mechanical sphere.

When Philus later saw a demonstration of the device, he concluded that “the famous Sicilian had been endowed with greater genius than one would imagine it possible for a human being to possess”. Solid globes marked with star constellations were common at the time; but Archimedes’ invention, Philus notes, also included the Sun, Moon and the five known planets, displaying as it turned “those various and divergent movements with their different rates of speed”.

Historians once thought Cicero’s description was either fabricated or exaggerated. But recent studies of the Antikythera mechanism discovered on a shipwreck from the first century bc have changed that. That device turned out to be a clockwork calendar that could display the movements of celestial bodies, as well as predicting solar and lunar eclipses — and proved that complex geared astronomical devices did exist in antiquity3. This sole surviving specimen consisted of more than 30 bronze gearwheels inside a wooden box the size of phone book. A dial on the front displayed the movements of the Sun, Moon and planets through the zodiac, and most specialists have concluded that Cicero and other authors were describing a similar machine.

Other scholars counter that 'sphere' could have been a generic term for astronomical models, regardless of their shape. But Wright points out that in Cicero’s description, when the globe was turned, “the Moon was always as many revolutions behind the Sun on the bronze contrivance as would agree with the number of days it was behind it in the sky”.

This implies that the device turned once each day, he says, which makes no sense for a flat dial such as the one on the Antikythera mechanism. 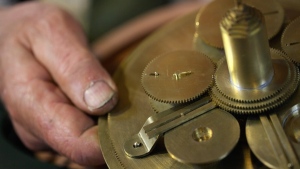 Wright shows the inner workings of his device, which contains 24 gearwheels.

Wright describes his resulting model as “a God’s eye view” of the cosmos, which he built with similar techniques to those that Archimedes might have used. The original was most probably made of parts cast in bronze, but Wright hammered his globe — 20 centimetres in diameter — from a sheet of copper. He engraved pictures of the Greek constellations on its surface and mounted it in a wooden box, which hides the portion of the globe below the horizon at any given time. The result is similar to a modern planetarium, but seen from the outside. “Imagine the Earth as a tiny ball at its centre,” he says, with the stars and planets rotating around.

As the globe is turned by hand, 24 gearwheels that are hidden inside drive curved pointers around its circumference. Those marking the Sun and the Moon move at a constant speed, whereas the planets meander, moving back and forth with respect to the fixed stars just as in the real sky.

No one knows whether Archimedes truly came up with such a device, but Wright argues that he was perfectly positioned to do so. The ancient scholar was a brilliant mathematician and famous for building ingenious machines, including some to resist the Roman siege.

The model will be displayed at the Basel Museum of Ancient Art and Ludwig Collection in Switzerland as part of an exhibition of artefacts from the Antikythera wreck.