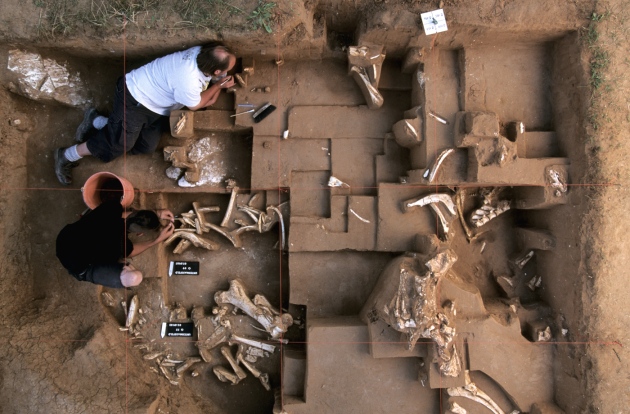 The Untermassfeld site in Germany has yielded more than 14,000 large animal fossils dating from between 900,000 and 1.2 million years ago.

Serious concerns have surfaced about three research papers claiming evidence for one of the earliest human occupations of Europe.

In an extraordinary letter posted to the bioRxiv.org preprint server on 31 October1, archaeologists allege that the papers, published in 2013, 2016 and 2017, included material of questionable provenance, and that results reported in the 2016 paper were based on at least one stolen bone. Editors at the journals concerned have now published expressions of concern about the papers.

There is no suggestion that the authors of those papers were involved in theft, but the researchers behind the letter say they are concerned that appropriate questions regarding the provenance of the material appear not to have been asked. They also reject the authors’ conclusion that a German site known for animal remains was also home to hominins, ancient relatives of humans, 1 million years ago. The authors have denied the allegations and say they stand by their conclusion.

The letter was initiated by archaeologist Wil Roebroeks at Leiden University in the Netherlands, and Ralf-Dietrich Kahlke, a palaeontologist and head of the Senckenberg Research Station of Quaternary Palaeontology in Weimar, Germany, who leads excavations at Untermassfeld, a fossil site about 150 kilometres northeast of Frankfurt. Their preprint describes repeated disappearances of bones from Untermassfeld, as well as fossils delivered in anonymous packages. The authors of the disputed papers insist, however, that they analysed independent collections of bones and stones, and reject the suggestion that any of it was stolen.

Untermassfeld, which has yielded more than 14,000 large animal fossils dating from between 900,000 and 1.2 million years ago, holds the most complete record of northern European wildlife from this time period. But since yearly excavations began in the late 1970s, no hominin bones or signs of occupation have been found, says Kahlke. Hominins first settled in southern Europe around 800,000 to 1 million years ago, most archaeologists agree, and expanded farther north only sporadically until around 500,000 years ago.

One of the first claims that hominins lived near Untermassfeld more than 1 million years ago appeared in a 2013 paper in the journal Quaternary International, which contended that rocks from the site resembled stone tools2. In a 2016 Journal of Human Evolution paper3, two of the original paper's authors, Günter Landeck at the North Hessian Society of Prehistory and Archeology of the Medieval in Bad Hersfeld, Germany, and Joan Garcia Garriga at the Universitat Oberta de Catalunya in Barcelona, concluded that marks on animal bones from Untermassfeld were made by humans. In 2017, Landeck and Garcia Garriga published further analysis of the bones in another Quaternary International paper4.

There is no suggestion that the other co-authors of the 2013 paper had any connection with the material from Untermassfeld. And after this article was published, Garcia Garriga contacted Nature to say that he, also, did not have connections with the material; he said that Landeck had done the analysis, while he himself helped in discussing data and writing up its archaeological implications.

In their papers, Landeck and Garcia Garriga attributed the material, along with hundreds of rock fragments of limestone and chert, to “the Schleusingen collection”, which they stated was recovered by a biology teacher in the late 1970s and early 1980s.

Kahlke says he is personally unaware of a Schleusingen collection and questions whether the material was collected at this time. Rocks like those described in the papers can be found in the vicinity of the site, but he says that animal fossils are concentrated in a small area that has been under excavation since 1978. No other research teams had permission to excavate the site during that time, Kahlke says. But he says that material was routinely stolen from the site — which he reported to the police, most recently in 2012 — until the site and fossil bed were better secured. There is no suggestion that Landeck and Garcia Garriga were involved in these thefts.

Researchers excavating at Untermassfeld allege that part of a deer bone protruding from the sediment on 28 May 2009 (in box, left) had disappeared several days later.

One fossil that Kahlke considers suspicious is a right limb-bone fragment from an extinct species of fallow deer, described in Landeck and Garcia Garriga’s 2016 Journal of Human Evolution paper. Kahlke says that the bone in the paper seems to match a piece of deer bone that thieves broke from a larger chunk of sediment at Untermassfeld, leaving part of the bone behind. The bone fragment is present in a photograph taken on 28 May 2009, and missing in a photograph taken several days later. A rhinoceros limb fragment that disappeared from the site in 2012 also closely resembles a fossil described in the 2016 paper, Kahlke says.

Deepening the mystery, a deer bone fragment was among a jumble of bones and rocks in two packages sent anonymously to a museum near Untermassfeld in March 2014. Ralf Werneburg, a palaeontologist and director of the Natural History Museum Schloss Bertholdsburg in Schleusingen, Germany, recognized the material as originating from Untermassfeld and contacted Kahlke. 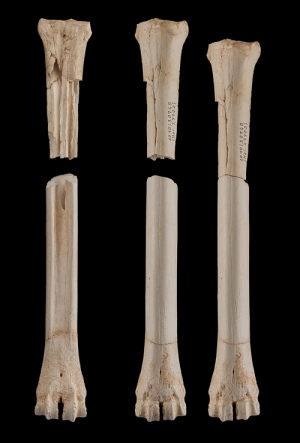 An anonymous package sent to a museum in Schleusingen contained a deer bone fragment (lower bone), which appears to match a fragment left behind (upper bone) after a theft from the Untermassfeld site in 2009. (The fragments are shown pieced together in the view on the far-right).

In Kahlke's opinion, the returned deer bone fragment is the one described in the 2016 paper, and matches up with the piece left behind after the 2009 theft. He says that the sixty-three other bone fragments in the packages also closely resemble some of the fossils described in the 2016 paper (the rhinoceros limb bone was not among them), and 11 rock fragments resemble artefacts in the 2013 Quaternary International paper.

Roebroeks and Kahlke’s team analysed the material in the returned packages, and concluded that it does not support a hominin occupation at Untermassfeld. They argue that the claimed cut-marks on the animal bones, including the deer bone, were probably caused by rodents or other natural wear, they say, and the rock fragments lack telltale marks typical of hominin tools. They say that it wasn't possible to analyse other material from Landeck and Garcia Garriga’s paper because its location is unclear.

Nature exchanged multiple e-mails with Landeck and Garcia Garriga about this mystery and asking for comment on the contents of this article. The researchers responded that most of the material they examined, including the deer bone fragment, was from two private collections amassed in the 1970s and early 1980s, and that much of it came from the same geological layer as Untermassfeld, but not within the site itself. They said that they presumed that some of this material was returned to the Natural History Museum Schloss Bertholdsburg in 2014 by the individual who had loaned it to them. They would not name the individual, but insisted: “We have nothing to do with a stolen bone”. They added that they are planning to publish a detailed response to Roebroeks and Kahlke's allegations.

The regional prosecutor’s office in Meiningen that investigated the 2009 theft told Nature the case had been closed unsolved later that year. A 5-year statute of limitation prevents it from being reopened. The case involving the 2012 theft of the rhinoceros bone was reopened early this year after the Journal of Human Evolution paper was published. The prosecutor’s office said that an individual, whom it declined to name because of data protection laws, had been found guilty and fined.

Expressions of concern published on each of the three papers note that the location of the Untermassfeld material “was not stated accurately in the publication”, and that the authors have been unable to adequately clarify where it is now. Landeck and Garcia Garriga declined to comment to Nature on the specific details of the notes but said that they plan to publish a response.

Sarah Elton, an anthropologist at the University of Durham, UK, and an editor at the Journal of Human Evolution, says that an investigation into the accusations is ongoing. She adds that, as a result of the case, the journal now asks prospective authors to supply complete information about the location of material included in a study, as well as how it was accessed.

Other experts have been shocked by the revelations. “This paper should be retracted, of course,” says Jean-Jacques Hublin, an anthropologist and a director at the Max Planck Institute for Evolutionary Anthropology in Leipzig, Germany, about the 2016 paper. But the concerns go beyond questions of provenance. Hublin says that, like Roebroeks and Kahlke, he does not accept the claim that Untermassfeld contains signs of hominin presence, and he worries that its appearance in prominent journals will cause others to accept the idea, despite the lack of evidence for it.

The debate around Untermassfeld, Roebroeks and his colleagues say, underscores the importance of providing accurate descriptions of the provenance of published material, which is needed to verify claims. The desire to set the record straight about the arrival of hominins to Europe was the primary motivation for the team’s letter, he says. Based on his analysis, Roebroeks argues: “These bones and stones are not indicative of hominin presence.”

With additional reporting by Alison Abbott

This article was updated on 13 November to note that expressions of concern have been published on all three papers, and to include a statement made after publication by Garcia Garriga: that he was not involved in analysing the material from Untermassfeld.