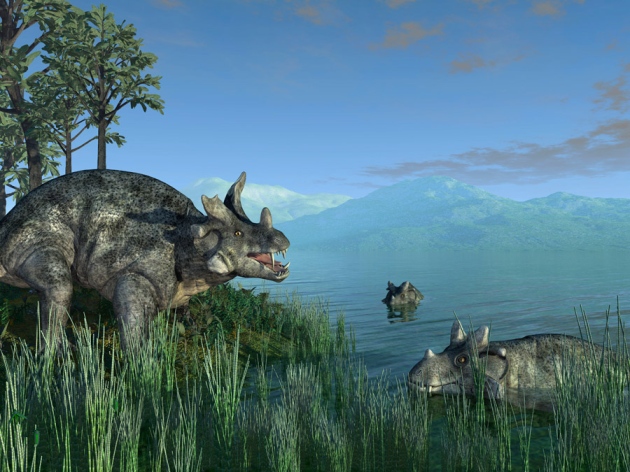 A reconstruction of Estemmenosuchus mirabilis — part of a group of animals that included the ancestors of mammals — in a Permian-era lake in what is now the Perm region of Russia, near the Ural Mountains.

Methane-belching microbes may have been behind the 'Great Dying', a mass-extinction event that wiped out some 90% of all species on Earth about 252 million years ago. Researchers say that the organisms acquired the ability to consume previously untapped food sources and went into overdrive, causing catastrophic disruption to the climate.

Microbes have had outsized effects on the planet's geology and on life, through the chemicals they consume and release. One example is the creation of the oxygen-rich environments that made the evolution of complex animals possible, or 'great oxygenation event', says theoretical geophysicist Daniel Rothman of the Massachusetts Institute of Technology (MIT) in Cambridge. But their effects can be catastrophic, too, he says.

Rothman and his colleagues looked into the causes of the Great Dying, which took place at the end of the Permian period that lasted from 300 million to 252 million years ago. Geological evidence shows that the event was accompanied by lethally high global warming and ocean acidification. The causes have long been debated, but one leading proposal points to Siberian volcanoes, which are known to have been hugely active at the time.

The paper by Rothman and his team, published this week in Proceedings of the National Academy of Sciences1, paints a fresh picture of how the extinction occurred. Leading up to it, large quantities of organic matter accumulated in ocean sediments. It was “a pile of food sitting there”, says study co-author Gregory Fournier, an evolutionary biologist at MIT, but nothing was in a position to eat it. 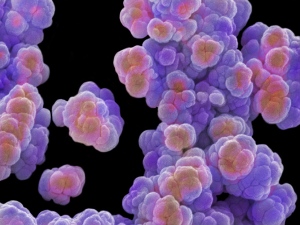 The archaea Methanosarcina seen under a scanning electron microscope.

That soon changed. The oceans were also home to single-celled microbes known as archaea. Some, known as Methanosarcina, consume carbon compounds and release methane. But the microbes did not have a way to process acetate, one of the key compounds that made up the sediment reserves. That is, until they captured two acetate-processing genes from a bacterium. By comparing the genomes of 50 different living organisms, Fournier dated that gene transfer to 250 million years ago, right around the time of the mass extinction.

Fournier says that the evolutionary event could have led to a prodigious microbial bloom — and consequent dump of methane, a powerful greenhouse gas, into the atmosphere — because it enabled Methanosarcina to feed on the organic sediment. Moreover, Rothman thinks that he has identified the bloom’s signature in the carbon-isotopic record of the ancient sediments. Using a mathematical approach, he revealed that the concentration of some gases — possibly including methane — were increasing “exponentially or possibly super-exponentially” during the time of the extinction. Microbial activity, and not volcanism or other potential causes, is the best explanation for that kind of growth, he says.

But the Siberian volcanoes could still be part of the story, says Rothman. They were probably responsible for a sharp increase in nickel deposits that the authors found in ocean sediments from the time. In known methane-spewing microbes, the metal is a crucial component of enzymes involved in the reactions that produce the gas. The availability of nickel is in fact a limiting factor to these organisms' growth, so nickel from the volcanoes could have caused a runaway effect in Methanosarcina, says Rothman, and eventually death for other species.

Even if methane was behind the Great Dying, it is still not clear what ultimately led to the demise of many species. The increased methane could have killed life on land by causing a toxic release of hydrogen sulphide; in the oceans, animals could have suffered from oxygen depletion, and acidification would have affected creatures’ ability to grow shells.

Some scientists are not so quick to relegate the volcanoes to a supporting role, however. What the researchers have found is part of the connection between the volcanoes and the die-out, says palaeobiologist Douglas Erwin of the Smithsonian National Museum of Natural History in Washington DC. But he warns that the evidence is “hardly conclusive”.

The great oxygenation event shows that it is not that far-fetched to think that a single microbe species could have changed Earth so drastically, says Rothman. “It could happen again, and it may very well have happened at other times in the past.”