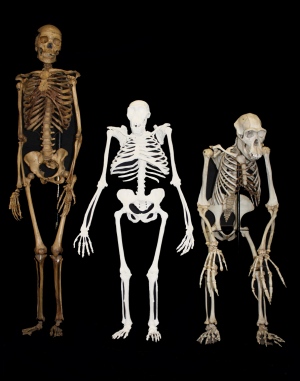 Lee R. Berger/University of the Witwatersrand

A reconstruction of the Australopithecus sediba skeleton (centre), compared to those of a modern human (left) and a chimpanzee (Pan troglodytes; right).

The two-million-year-old remains of a novel hominin discovered in August 2008 are an odd blend of features seen both in early humans and in the australopithecines presumed to have preceded them. A battery of six studies1–6 published today in Science scrutinizes the fossils of Australopithecus sediba from head to heel and yields unprecedented insight into how the creature walked, chewed and moved. Together, the studies suggest that this hominin was close to the family tree of early humans — although it remains controversial whether it was one of our direct ancestors.

“We see evolution in action across this skeleton,” says Lee Berger, a palaeoanthropologist at the University of the Witwatersrand in Johannesburg, South Africa. For instance, whereas the creature’s arms are ape-like, its hands and wrists are remarkably like those of humans. And although the hominin’s pelvis is shaped like a modern human's, its torso included a narrow upper rib cage like those found in apes.

One of the six studies focused on Au. sediba’s teeth1, comparing 22 different aspects across hundreds of teeth from several other species of australopithecines and thousands of early human teeth. Tooth similarities among the species are more likely to signify common ancestry than independent evolution towards a beneficial design, says Debbie Guatelli-Steinberg, an anthropologist at Ohio State University in Columbus. That's because most of the characteristics the team chose to study, such as the subtle curvature of a portion of the tooth’s surface, are not likely to be evolutionarily useful.

One of the most telling analyses in the set of studies relates to Au. sediba’s legs, and how the creature might have walked2. For biomechanical models to adequately reconstruct a creature’s stride and gait, researchers need to provide anatomical data about five body parts: the heel, ankle, knee, hip and lower back, says Jeremy DeSilva, a functional morphologist at Boston University in Massachusetts. “With Au. sediba, we have all five, and the anatomy is flat-out different from what we see in other australopithecines,” he notes. The individual pieces seem strange in isolation, but together they tell a story, DeSilva adds. 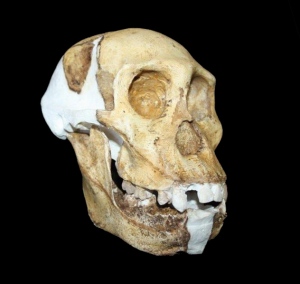 The reconstructed skull and mandible of Australopithecus sediba.

His team’s models show that Au. sediba would have walked very differently than modern humans. In each stride, the first part of the creature’s foot to contact the ground would have been the outer edge of the foot. (In modern humans, the heel strikes the ground first.) As weight increasingly shifted to that foot, the foot would have rolled inwards, causing a tremendous amount of rotation at each of the leg joints. The result, says DeSilva, is a shuffling, swaggering, flat-footed gait with short strides. “Whoa!” he says. “We didn’t expect that.”

Au. sediba’s mode of walking was probably a compromise, enabling it to shamble across grasslands from one patch of woodland to another and then clamber around within trees once it reached the forest, says DeSilva.

Physiological analyses of Au. sediba’s torso support this notion3. The narrow, ape-like upper body suggests that the creature wouldn’t have had large lung capacity, says anthropologist Peter Schmid, who led the torso work and recently retired from the University of Zurich in Switzerland. Also, the structure of the shoulder joints — an elevated, 'shrugged' arrangement well suited to climbing in trees and hanging from branches — hints that Au. sediba couldn’t have swung its arms well when it walked. Together, Schmid notes, these factors would have limited the creature’s ability to breathe heavily when walking or running.

Although most aspects of Au. sediba’s anatomy suggest that it is a close relative of early humans of the genus Homo, exactly where the species lies within human evolution isn’t yet clear. “We’re trying to be cautious with our interpretations,” says Berger.

Nevertheless, “from what we’re seeing, Au. sediba is a possible ancestor of Homo”, Berger says. “But if the creature is an ancestor of Homo, then the genus arose in a very different way than previously hypothesized.”

However, ancestry and close kinship are two different things, and some within the palaeoanthropology community dispute that the hominin was a direct human ancestor. One such researcher is Donald Johanson, a palaeoanthropologist at Arizona State University in Tempe who wasn’t involved in the new studies. In Ethiopia in 1974, Johanson and colleague Tom Gray discovered the fossils of “Lucy” (Au. afarensis)— a 3.2-million-year-old hominid whose 40-percent-complete skeleton is one of the most renowned fossils in the world.

“From what I have seen of the fossils, I think Au. sediba is another species of Australopithecus that confirms species diversity in early hominin evolution,” says Johanson. Although Au. sediba “abundantly demonstrates a unique set of anatomical features”, he notes, the species was probably a dead-end branch on the hominin family tree.