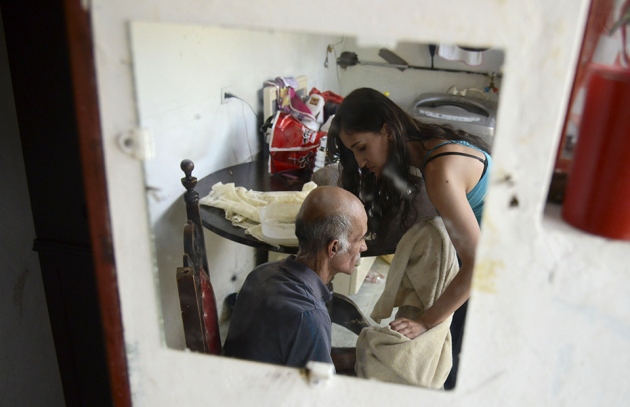 Alzheimer's disease is marked by cognitive decline and the accumulation of proteins in the brain.

After years of disappointment, clinical-trial results released on 22 July suggest that antibody treatments may produce small improvements in people with Alzheimer’s disease.

The drugs — Eli Lilly’s solanezumab and Biogen’s aducanumab — target the amyloid-β protein that accumulates in the brains of people with Alzheimer’s. Many researchers question whether the findings will hold up, given that antibody drugs against amyloid have failed in every previous test against the disease. Details of the results were presented at the Alzheimer's Association International Conference in Washington DC.

Lilly, of Indianapolis, Indiana, says that in a trial with 440 participants, solanezumab seemed to slow the cognitive decline of people with mild Alzheimer’s by about 30%. The loss of mental acuity in these patients over 18 months was equivalent to the deterioration that participants with a similar level of Alzheimer's disease in a placebo group experienced in just 12 months.

Lilly snatched this small victory from the jaws of defeat. In 2012, the company reported no difference between patients who had taken solanezumab for 18 months and those who had received a placebo. But when the company reanalyzed that trial it found a slight improvement in participants whose symptoms were mild when the trial began. Lilly continued the test for six months and began giving solanezumab to the 440-member control group, whose disease was by then more advanced.

At the meeting, Lilly showed that giving the drug to the 'late start’ group slowed their cognitive decline to match the rate seen in the 440 people who had been treated for the entire study. This suggests that the drug targeted the root of Alzheimer’s disease, rather than just relieving its symptoms.

Biogen, of Washington DC, presented results that show a moderate dose of its drug aducanumab reduced amyloid in 23 people, but did not have statistically significant clinical benefits. In March, the company reported that 27 people who received high doses of aducanumab for one year showed significantly less cognitive decline than people who received a placebo, and had less amyloid build-up in their brains.

Both sets of results provide support for the 'amyloid hypothesis': the idea that amyloid deposits in the brain are a cause of Alzheimer's, rather than an effect, and that removing them stops the disease. “We’re creeping in the right direction,” says Samuel Gandy, a neurobiologist at Mount Sinai School of Medicine in New York. “A lot of the euphoria is because things were so negative for so long.”

Solanezumab failed in several previous trials, and drug firms Pfizer and Johnson & Johnson discontinued development of their antibody drug bapinezumab in 2012 after trials in 2,400 people failed. Roche halted a 3,000-person trial of its anitbody candidate, gantenerumab, last December — although it presented results this week showing that the highest dose of the drug had at least entered the brain and reduced the amount of amyloid protein in patients with fast-progressing disease.

Experts are greeting those results, along with the Biogen and Lilly news, with tempered excitement, given the relatively small size of the clinical trials.

But Eric Siemers, an Alzheimer's researcher at Lilly, is optimistic. “It's surprising to me that [solanezumab] worked so well,” he says. “There's a lot of promise to slow progression.”

Lilly launched a larger phase III trial of solanezumab in 2013, enrolling 2,100 people with mild symptoms and amyloid deposits in their brains. The company will end the study in October 2016. In December, Biogen said that it would launch a phase III trial with 2,700 participants that would run for 18 months.

Lon Schneider, an Alzheimer's researcher at the University of Southern California in Los Angeles, questions the decision to start large trials before the drugs, and the amyloid hypothesis, have been well validated. “Why are there so many antibodies when none so far have proven efficacy?” he says, noting that behavioural interventions, such as diet and exercise, have been shown to slow Alzheimer’s as much as any drug1.

But not everyone agrees. “This is the time to be bold,” says Randall Bateman, a neurologist of Washington University in St. Louis, Missouri. “It seems to me the cost of delay from a human suffering standpoint is much more expensive than cost of moving forward and being active.”

Bateman is leading a trial that is testing Lilly's solanezumab and Roche's ganetenerumab in 160 people between 18 and 80 years old who have a genetic risk of Alzheimer’s, but no symptoms. It is one of several efforts that are trying to determine whether the disease can be prevented by destroying amyloid protein before the brain is damaged. That damage occurs over decades2, and many Alzheimer’s researchers suspect that antibody trials have failed because they have treated people too late.

This hypothesis is supported by Lilly’s finding that only people with mild disease benefit from solanezumab. The latest results also demonstrate for the first time in humans that slowing amyloid deposition can slow cognitive decline, says Eric Reiman, executive director of the Banner Alzheimer's Institute in Phoenix, Arizona.

That is important because the US Food and Drug Administration has said that it will not approve drugs that block amyloid deposits without sufficient evidence of a clinical benefit. If one drug company can prove the cause and effect between amyloid accumulation and Alzheimer’s progression, all companies will benefit, says Reiman, who is leading a trial of Roche’s antibody drug crenezumab, which has also failed in large trials.

If such drugs falter in larger trials, that would be a setback for Alzheimer’s research in general, says Gandy. “The main concern is that the pipeline behind amyloid-reducing agents is really pretty spare,” he says, although at least three companies are developing alternate therapies. including antibodies, that target a different protein, tau, which destroys neurons in advanced Alzheimer’s disease.