Monkeys infected with Ebola have been cured by a cocktail of three antibodies first administered 24 hours or more after exposure. The result raises hopes that a future treatment could improve the chances of humans surviving the disease caused by the deadly virus, which kills up to 90% of infected people and could potentially be used as a biological weapon. Most treatment regimes tested to date only improve chances of survival if administered within one hour of infection. 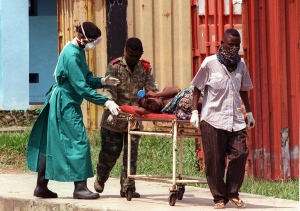 There are no approved treatments for people infected with Ebola.

Researchers based at the National Microbiology Laboratory in Winnipeg, Canada, administered an antibody cocktail named ZMAb to cynomolgus monkeys (Macaca fascicularis) infected with the Zaire virus — the deadliest strain of Ebola, prevalent in African countries including the Democratic Republic of Congo and Gabon. All four of the monkeys that began the three-dose treatment regime within 24 hours of being infected survived. Two of four monkeys given the cocktail from 48 hours of infection also lived. A monkey that was not treated died within five days of infection.

“The antibodies slowed replication until the animals’ own immune systems kicked in and completely cleared the virus,” says Gary Kobinger, a medical microbiologist at the University of Manitoba who led the study. The results are published today in Science Translational Medicine1.

The antibodies, isolated from mice vaccinated with fragments of the virus, target and neutralize a glycoprotein on the surface of the virus that allows it to enter and infect cells. Although the strategy of using antibodies is not new, Kobinger says that, unlike many previous treatments, his group's cocktail contains multiple antibodies that each target different locations of the glycoprotein, making it harder for the virus to resist attack. Many other regimes that have been tested in animals and discarded were pre-exposure vaccines that focus on preventing infection, rather than treatments that can be administered hours after the infection has taken hold.

Defyrus, a biotechnology firm based in Toronto, Canada, is developing the antibodies as part of an Ebola treatment called Defilovir, in which they work in tandem with DEF201, an antiviral gene therapy. The company is planning to test the safety of the regime in humans in a phase I clinical trial set to begin before the end of 2014, says Jeffrey Turner, the company's chief executive.

“The therapy could be far more effective than others currently available,” says Thomas Bowden, a structural biologist at the Wellcome Trust Centre for Human Genetics at the University of Oxford, UK. Although ZMAb targets only one strain of the Ebola virus, the approach might be broadened to produce similar cocktails that treat infection with related strains, he says.

“This is certainly a viable strategy and they have only a few steps before they can go through to humans,” says Bowden.

Dennis Burton, an immunologist at the Scripps Research Institute in La Jolla, California, says that the results are “very encouraging” for cases where the antibodies can be given within one day or so of exposure to Ebola. But the work is unlikely to help in cases where the infection is established and symptoms have appeared. “I would remain rather pessimistic given the explosive course of Ebola virus disease,” he says.