Researchers working in the burgeoning field of cancer immunotherapy last week announced that a way of arming the body’s natural defences to fight tumour cells has proved effective against three different types of cancer.

An antibody-based treatment developed by Suzanne Topalian, an oncologist at the Johns Hopkins University in Baltimore, Mary­land, and her colleagues either eliminated or shrank tumours in 49 of 236 patients with certain types of advanced skin, kidney and lung cancer. Previous cancer immunotherapies have worked in smaller percentages of patients. The results of the phase I clinical trial were published on 2 June (S. L. Topalian et al. N. Engl. J. Med. http://dx.doi.org/10.1056/NEJMoa1200690; 2012).

“I think it really changes the field, because the response rates are much higher,” says Antoni Ribas, a cancer researcher at the Jonsson Comp­rehensive Cancer Center of the University of California, Los Angeles, who is testing a similar treatment in clinical trials.

The latest therapy works by reactivating T cells, which identify ‘foreign’ cells and either bind to and destroy them or recruit other immune cells to make the attack. Proteins on the surface of some tumour cells can lull T cells into quiescence by binding to a receptor known as ‘programmed cell death 1’ (PD-1), effectively disarming the body’s immune response. The immunotherapy blocks tumour cells from binding to PD-1, thereby reactivating T cells and allowing them to orchestrate an attack on the cancer (see ‘Waking up the body’s defences’). 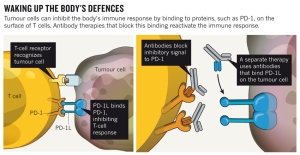 The antibody, made by researchers at Bristol-Myers Squibb in Princeton, New Jersey, also had long-lasting effects for some patients in the latest trial. Twenty people responded to the therapy for a year or longer — an unusually durable response for patients with advanced cancers.

This type of immunotherapy has been posited as a potential cancer treatment for a century, but has only recently begun to bear fruit. In 2010, the US Food and Drug Administration (FDA) approved sipuleucel-T, which is marketed under the trade name Provenge by Dendreon of Seattle, Washington. The treatment is a vaccine made by incubating a patient’s own immune cells with molecules that stimulate the cells to attack prostate tumours.

In 2011, the FDA approved another drug, ipilimumab, to treat melanoma. Sold by Bristol-Myers Squibb as Yervoy, the drug targets cytotoxic T-lymphocyte antigen 4 (CTLA-4), which, like PD-1, is exploited by tumour cells to stop T cells from attacking. However, CTLA-4 binding can occur between T cells and other cells in the body, whereas the PD-1 binding partner is expressed only by tumour cells.

That the drug also works in lung cancer — which kills more people each year than any other cancer — is a breakthrough, says Jedd Wolchok, an oncologist at the Memorial Sloan-Kettering Cancer Center in New York, who is testing therapies aimed at blocking PD-1 in clinical trials. “The most important lesson that the practising oncologist is going to take away is that immunotherapy is now relevant to some of the very common diseases that they see,” Wolchok says.

Because stimulating the immune system can induce deadly autoimmune responses, a major concern with any immunotherapy is safety. Three patients in the anti-PD-1 trial — 1% of those treated — died from lung inflammation caused by the trial drug. Overall, 11% of the patients had serious side effects.

“If we can get away from the significant adverse events that we’ve seen and help larger numbers of patients, then immunotherapy can be a game changer,” says Ira Mellman, vice-president of research oncology at Genentech in South San Francisco, California.

Researchers at Genentech and elsewhere are testing a similar therapy that targets the PD-1 ligand (PD-1L), the PD-1 binding partner expressed by tumour cells. Mellman predicts that targeting PD-1L might reduce side effects by taking aim at the tumour cells while leaving T cells free to bind to molecules that prevent autoimmune reactions.

It is not clear why certain cancers seem to respond better than others to drugs that block PD-1. Although the anti-PD-1 therapy had no effect on colon cancer in the most recent trial, the treatment did work for one patient with colon cancer in an earlier trial. That patient is still well four years later, Topalian says. She adds that identifying a biomarker to predict who will respond to the therapy is a priority. “We really think we’re only scratching the surface of the potential of this drug,” she says.