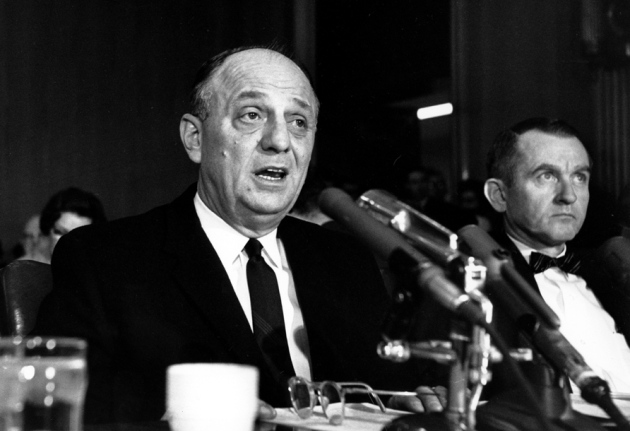 US Surgeon General Luther Terry in 1965, testifying in a Senate committee a hearing on a proposed legislation that would require health warnings on cigarette packages.

Half a century after the US government sounded an influential alarm about the health dangers of smoking, the global rate of adults who smoke has declined and millions of smoking deaths have been prevented, report a batch of studies released today.

“Tobacco control has been an extremely successful public health achievement,” says biostatistican Theodore Holford of Yale University in New Haven, Connecticut, who is first author of one of the papers published today. But there is still much work to do, he notes, particularly in countries and populations in which smoking is still popular.

“With millions of deaths every year attributable to tobacco, we can and should do better,” adds global-health researcher Christopher Murray of the University of Washington in Seattle, leader of a group that is also publishing a paper today. These papers present research on smoking prevention and control as part of a special issue the Journal of the American Medical Association that marks the 50th anniversary of a landmark report on the health effects of smoking. The report, which was released on 11 January 1964 by US Surgeon General Luther Terry, concluded that the evidence that smoking causes lung cancer and other illnesses was overwhelming. The Surgeon General is a spokesperson for the US Department of Health.

The Surgeon General's report helped to spur measures to deter smoking, such as US legislation in 1965 that required warning labels to be placed on cigarette packs. Since then, the movement towards stricter regulation for tobacco has steadily gained momentum. In 2003, the World Health Organization Framework Convention on Tobacco Control recommended that countries should take measures to regulate the tobacco industry by, for example, banning tobacco advertising and smoking in public places, and imposing steep taxes on tobacco products.

These and other tobacco-control efforts, such as education campaigns, lawsuits against cigarette makers and smoking-cessation programmes, have averted 8 million premature deaths in the United States alone, estimates Holford's study, which was led by David Levy of Georgetown University in Washington DC. They study compared how US life expectancy has changed since 1964 with how it would have looked had tobacco control measures not been adopted1.

Physician Michele Bloch, chief of the Tobacco Control Research Branch at the US National Cancer Institute (NCI) in Bethesda, Maryland, calls the study by Levy and colleagues “powerful and exciting” because no study has previously estimated the sum total of all US smoking-related deaths averted over such a long period of time. The study found that those whose lives were saved by tobacco control efforts gained an average of 20 years of life, and that most of the deaths averted would have claimed people when they were middle-aged.

But the studies also point out the limitations of current control programmes. For instance, Levy’s study, which was funded in part by the NCI, notes that the use in the United States of e-cigarettes, smokeless tobacco, cigars and hookahs is increasing and could offset health gains if these forms of tobacco are used alongside cigarettes. Murray’s study also points out that because of population growth, more people are smoking today — 967 million — than in 1980, when there were 721 million smokers. And, worryingly, the decline in worldwide smoking rates is slowing. From 1996 to 2006 the rate dropped by about 1.7% per year, but it has only dropped by 0.9% per year since then, mostly due to more people taking up smoking in countries such as Bangladesh, China, Indonesia and Russia. In fact, in some countries half of all men are still smoking, Murray says.

It is not clear in every case why some countries still have high smoking rates, but Murray notes that nations that have long worked to implement anti-smoking laws and campaigns are among those where smoking has declined the most. For instance, he says, New Zealand was one of the first countries to ratify the Framework Convention on Tobacco Control, and it  banned smoking from almost all work places in 2004. Smoking rates have declined there from 26% in 1990 to 18% in 2012, his team found.

By contrast, half of all adult men have smoked in Russia for the past three decades, Murray says. The country enacted anti-tobacco laws only last year.

Murray says that more must be done to further cut global smoking rates. “It’s particularly urgent that tobacco control efforts intensify in countries where the number of smokers is increasing,” he says. “It shouldn’t be the case that countries like Mexico and Norway can cut their smoking rates by more than half while other countries are still at 30%, 40% or 50% smoking prevalence.”

Bloch hopes that Murray's study will help to bolster global tobacco control efforts because it shows that smoking is not more intractable than other public-health priorities, such as infectious disease. “There is sometimes the sense that global tobacco use is such a difficult and entrenched problem that efforts to solve it are futile,” Bloch says. ”This paper documents that this is in fact wrong — that progress can, and indeed is, being made.”