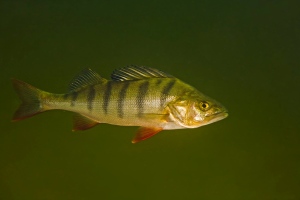 Perch can accumulate high levels of oxazepam when the anti-anxiety drug makes it into their river water.

Tiny amounts of a common anti-anxiety medication — which ends up in wastewater after patients pass it into their urine — significantly alters fish behaviour, according to a new study. The drug makes timid fish bold, antisocial and voracious, researchers have found.

Oxazepam belongs to the class of drugs called benzodiazepines, the most widely prescribed anxiety drugs, and is thought to be highly stable in aquatic environments. It acts by enhancing neuron signals that damp down the brain's activity, helping patients to relax.

An article in Science this week now places the drug on a growing list of pharmaceutical products that escape wastewater treatment unscathed and may be affecting freshwater communities1. A chemical found in contraceptive pills, known as 17-β-estradiol, and the antidepressant drug fluoxetine (Prozac) have been shown to alter behaviour in the fathead minnow (Pimephales promelas), and the popular anti-inflammatory drug ibuprofen reduces courtship behaviour in male zebrafish (Danio rerio).

Taken together, the evidence suggests that tests of possible pollutants must go beyond merely cataloguing fatal or highly toxic doses, says Todd Royer, an ecologist at Indiana University in Bloomington. “This study really highlights the importance of non-lethal effects,” he says. Even if a drug doesn't kill or cause acute toxicity, it could be altering “community structure and other ecosystem processes”, he explains.

To track down the effects of oxazepam, Tomas Brodin of Umeå University in Sweden and his colleagues began by measuring the drug’s concentration in the Fyris River, a small watercourse in a densely populated region of Sweden. They found that perch (Perca fluviatilis) in the stream accumulated the drug in their muscles at concentrations more than six times higher than those found in the water. Similar concentrations have been detected in water bodies near populated areas around the world, says Micael Jonsson, an ecologist at Umeå University and a co-author of the study.

Juvenile perch were exposed to two concentrations of oxazepam: one roughly twice the concentration found in the Fyris River, the other nearly 1,000-fold higher. Even the lower concentration dramatically altered their behaviour, says Jonsson. Non-medicated perch are timid, preferring to stick to familiar territory and occasionally peeking out into the wider tank. The medicated fish, however, embraced the unknown, readily swimming into uncharted territory.

And whereas non-medicated perch swim towards other fish of the same species, the medicated perch turned away from their compatriots. Fish exposed to oxazepam were also quicker to feast on zooplankton introduced into the tanks.

At first, Jonsson, says, the researchers were surprised. “Anti-anxiety drugs are viewed as calming and soothing, but in fish it was the opposite,” he says. But they now speculate that the drug causes the fish to be less inhibited by fear. “If the fish were anxious to begin with, perhaps the drug reduces anxiety and allows the fish to become more active,” says Jonsson.

If the drug has the same effects in the wild, it could affect the surrounding ecosystem, says Jonsson. Young perch feed on zooplankton, which, in turn, eat algae. If drugged fish gobble more zooplankton, algae may thrive — and perhaps also bloom.

But Jonsson warns that it is difficult to extrapolate from the laboratory to a natural setting. The ecological effects of oxazepam’s effects on appetite may be offset if the emboldened perch then find themselves easier prey, for example.

“How this laboratory work would translate to effects in wild populations is a big guess,” agrees Charles Tyler, an ecotoxicologist at the University of Exeter, UK. “We have no idea of the resilience of those populations in the wild.”

Meanwhile, prospects for solving the problem of pharmaceuticals in wastewater look dim. Removing or treating the chemicals before they get into rivers would be prohibitively expensive with current technology, Tyler says, and could carry a high carbon footprint.