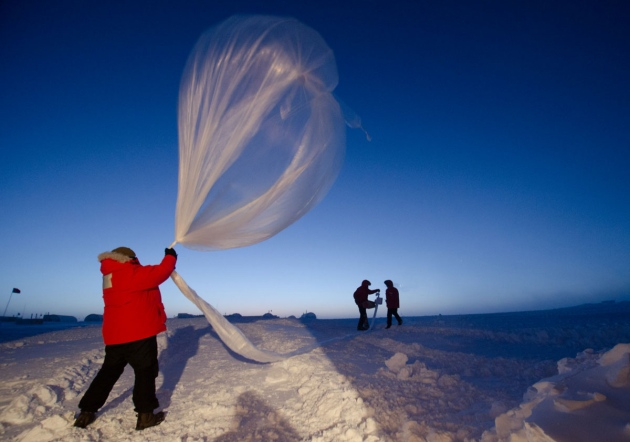 Researchers at the South Pole release a balloon carrying instruments to measure ozone up to 32 kilometres into the atmosphere.

It's the beginning of the end for the Antarctic ozone hole. A new analysis shows that, on average, the hole — which forms every Southern Hemisphere spring, letting in dangerous ultraviolet light — is smaller and appears later in the year than it did in 2000.

The 1987 global treaty called the Montreal Protocol sought to reduce the ozone hole by banning chlorofluorocarbons, chlorine-containing chemicals — used as refrigerants in products such as air conditioners — that accelerated ozone loss in the stratosphere. The study shows that it worked.

“We as a planet have avoided what would have been an environmental catastrophe,” says Susan Solomon, an atmospheric scientist at the Massachusetts Institute of Technology in Cambridge, and a pioneer in the field of Antarctic ozone loss. “Yay us!”

She and her colleagues report the finding on 30 June in Science1.

Other scientists have also found hints that the ozone hole is on the mend: a 2008 study2 reported that the ozone layer’s rate of decline had begun to slow, and a 2011 study3 suggested that ozone levels had begun to rebound. A 2014 assessment by the World Meteorological Organization found that healing had begun at high elevations in mid- and low latitudes.

The latest work is another powerful example of this ongoing recovery, says Birgit Hassler, an atmospheric scientist with the Cooperative Institute for Research in Environmental Sciences in Boulder, Colorado. “It is a very clear and unique piece of evidence that indeed the ozone hole is healing,” she says.

October 2015 saw one of the largest Antarctic ozone holes on record — with an area of 28.2 million square kilometres at its peak — which raised questions about whether the hole was really on the mend. But there was evidence that large volcanic eruptions could affect the chemistry of the ozone layer, so Solomon’s team decided to investigate. The researchers found that the Calbuco volcano in Chile, which had erupted in April 2015 and filled the stratosphere with sulfur particles that triggered ozone-destroying reactions, was partly to blame for the large hole.

The scientists’ finely tuned climate model also found that the ozone hole over Antarctica in the month of September shrank by 4.5 million square kilometres, on average, between 2000 and 2015. September is important because it is when sunlight fully returns to the Antarctic after winter, initiating chemical reactions in the atmosphere that eat away at the ozone layer. “The trend is significant, and it’s what you expect from chlorine chemistry,” Solomon says.

Until now, most scientists had focused on October, the month when the ozone hole is biggest. But Solomon says that the fingerprints of healing are most obvious in September: the hole is now opening up an average of ten days later than it used to.

Ozone map of the southern hemisphere from October 1979 - October 2015

Measurements taken from weather balloons over Antarctica also show that ozone recovery is happening at the altitudes predicted by the team’s model. “If you’re getting the depth right and the shape right and the size right and the timing right, you start to feel very confident,” says Solomon.

The September trend is convincing, says Sophie Godin-Beekmann, an atmospheric chemist at the French National Centre for Scientific Research in Paris. But she would like to see more years included in the analysis.

It will take many decades for the hole to heal completely. “The ozone hole remains nearly as potent as ever and is not expected to disappear before the end of the century, with all its implications for human and ecosystem health,” says Michaela Hegglin, an atmospheric scientist at the University of Reading, UK. The smaller Arctic ozone hole over the North Pole, which is more variable than its southern counterpart, has not yet shown a trend towards healing.

For Solomon, who has been working on Antarctic ozone since the 1980s4, the turnaround is a welcome change. “To see it getting better is really quite amazing,” she says.