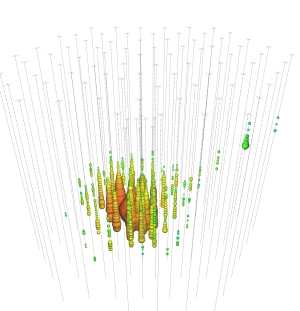 A reconstructed detection in the IceCube sensor array of a suspected neutrino with an energy of 252.7 trillion electron-volts. The strings of detectors descend from the surface of the ice to more than two kilometers below.

Hot on the heels of detecting the two highest-energy neutrinos ever observed, scientists working with a mammoth particle detector buried in ice near the South Pole unveiled preliminary data showing that they also registered the signal of 26 additional high-energy neutrinos. The newfound neutrinos are somewhat less energetic than the two record-setters but nonetheless appear to carry more energy than would be expected if created by cosmic rays hitting the atmosphere—a prodigious source of neutrinos raining down on Earth. The particles thus may point to unknown energetic astrophysical processes deeper in the cosmos.

“The result right now is very preliminary,” cautions Nathan Whitehorn of the University of Wisconsin–Madison, who described the new data May 15 during a symposium in Madison on particle astrophysics. “We’re not totally certain right now that it’s from an astrophysical source.” But it is difficult to explain the number and energy of the detected particles by invoking known processes within the solar system. “If this does in fact hold up with more data, and this does turn out to be an astrophysical source, then we’ll be able to address some questions in ways that were totally inaccessible before,” Whitehorn adds.

The IceCube Neutrino Observatory makes up for the renowned slipperiness of neutrinos, the lightweight fundamental particles that rarely interact with atoms of matter, by casting a wide net. IceCube consists of more than 5,000 light sensors, buried at depths of up to two kilometers, embedded in enough Antarctic ice to fill several hundred thousand Olympic swimming pools. In such a large volume, one neutrino of the many streaming constantly through space, our bodies and even solid rock occasionally bumps against an atom in the ice, which produces a tiny flash of light.

The properties of the light emitted by a neutrino strike in the IceCube detector, such as the light pattern registered by the sensor array (Is it bloblike or streaky?) as well as the travel direction of the particle (Was it downward from the sky, or upward through Earth?) can reveal which of three known flavors of neutrino was involved and where it came from. Therein lies a key advantage of neutrino astronomy—unlike charged cosmic rays, whose trajectories bend and twist through the cosmos under the influence of magnetic fields, neutral particles such as neutrinos trace straight back to their sources.

From known processes in the atmosphere, researchers expected to register about 10.6 particles over two years with energies measured in the tens or hundreds of tera–electron volts (trillions of electron volts). The 28 detected particles—including the two extremely high-energy particles announced in April—thus indicate an additional neutrino source that has not been accounted for.

So IceCube physicist Naoko Kurahashi Neilson, also of U.W.–Madison, traced the arrival directions of the newfound energetic particles to look for clues to their origins. “What I tried to do is figure out if they point back to anything that might correspond with cosmic-ray production,” she says. But perhaps because there were relatively few particles to work with, no strong patterns emerged. “Because we have a lot of events compared to before, but still not many, it’s hard to say,” she adds. “My conclusion was that there are no identifiable sources at this time.”

The researchers used screening techniques to ferret out impostor particles and limit the background noise from atmospheric neutrinos, such as treating the edge of the detector as a red-flag region. A charged particle such as a muon from the atmosphere would light up sensors at the periphery of the IceCube detector as it enters, whereas a neutrino would penetrate cleanly and trigger sensors deep inside the ice. “You don’t want things that have come into the detector, you want things that start in the detector,” says IceCube physicist Claudio Kopper of U.W.–Madison. Nevertheless, proving that the neutrinos indeed originated in high-energy cosmic processes will take time. “The search is always for the source, and we haven’t found that yet,” Kopper says. “That would be the smoking gun.”