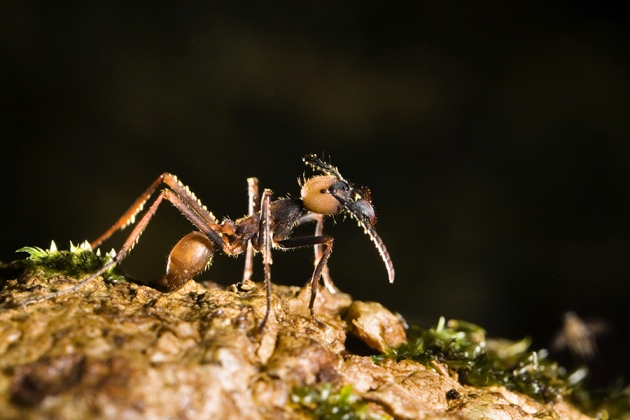 Colliding tectonic plates pushed up a strip of land from the watery abyss that once divided North and South America, forming the isthmus of Panama. But a study now hints that this happened millions of years earlier than scientists had thought.

Evolutionary and population-genetics data from Eciton army ants, which can only travel on dry ground, suggest that the isthmus formed 4–8 million years ago. The research, published on 25 October in Molecular Ecology1, challenges the long-held idea that the link between continents emerged no more than 3 million years ago.

“Our genomic data is very strong evidence that the army ants crossed this region much earlier in time than the model of the simple closure of the isthmus suggests,” says Corrie Moreau, associate curator at the Field Museum in Chicago, Illinois, and co-author of the study. She notes that recent geological studies have also hinted that the isthmus may have emerged earlier than 3 million years ago.

Moreau began the study as an attempt to understand diversity among army ants, top predators in many Latin American rainforests, but soon found herself in the middle of a geological controversy. Eciton ant queens and workers lack wings, making them unable to travel across water. New colonies form only when a queen takes half of her original colony and relocates it, a huge barrier for long-distance dispersal.

“She picked the perfect species for this kind of study,” says Brian Fisher, an entomologist at the California Academy of Sciences in San Francisco.

Moreau and her colleagues used a technique called genotyping to sequence small fragments of DNA from the genomes of multiple individuals from all nine Eciton species, which are found from Brazil to southern Mexico. This allowed the researchers to compare genetic variations both between species and within different individuals of the same species.

Camilo Montes, a geologist at the University of the Andes in Bogotá, Colombia, notes that the date of isthmus formation suggested by the genetic study is in line with results he obtained from dating uranium in zircon crystals preserved in rocks near the isthmus. “This molecular data is completely independent of our geological results. It provides another view of how these events happened, which is why this study is so important,” he says.

Other recent biological and geological evidence also suggests that the isthmus emerged earlier, through a more complex process, than previously thought. That evidence includes fossil teeth from ancient monkeys, which suggest that the primates crossed the gap between the continents 18 million years ago. And 20-million-year-old plant fossils found during the excavation of the new Panama Canal in 2012 also challenge the accepted age of the isthmus2.

Still, these results can’t and won’t end the debate among geologists. Fisher notes that a sister group of army ant, Neivamyrmex, was able to travel to the Caribbean, perhaps rafting over on large debris from hurricanes or landslides. This leaves the option open for Eciton as well, especially if the gap between continents was relatively small.

Anthony Coates, a geologist at the Smithsonian Tropical Research Institute in Panama City, is sceptical of any evidence contradicting the isthmus’s 3-million-year age. “There are still a series of investigations in different disciplines that all converge on the same number of around three million years ago. This is extremely rigorous evidence,” Coates says.

The geological battle lines, it seems, have been drawn. Whether they can form an ideological land bridge similar to the physical one that researchers are studying remains to be seen.