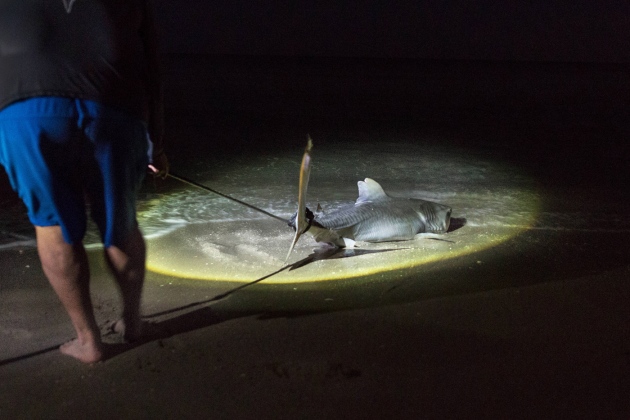 Marine researchers have turned to an innovative data source to track the impact of ‘game fishing’ on endangered shark species: Internet message boards where anglers boast about their catches. An analysis of more than a thousand posts revealed both illegal behaviour — and surprisingly warm attitudes towards conservation1.

Commercial overfishing is responsible for population declines in many marine species. But researchers suspect that recreational, or sport, fishing — done for the thrill of catching big fish — could be a serious threat to some endangered species, particularly sharks. One in four shark species worldwide is threatened with extinction, according to the International Union for Conservation of Nature Red List.

A 2004 study2 found that although recreational anglers landed only 4% of all fish caught in US waters they landed 64% of endangered fish — including sharks — caught from the Gulf of Mexico.

But precise data on the scale of activities — and how recreational anglers feel about conservation — are hard to come by. “There’s a lack of data because it isn’t considered a priority,” says David Shiffman, a shark ecologist at Simon Fraser University in Vancouver who led the latest work. Information on fish-handling techniques, which can mean the difference between life and death for the animals, are particularly sparse.

“I think there is a need to better characterize the behaviour of anglers in the field,” says Steven Cooke, a fish ecologist at Carleton University in Ottawa.

Shiffman was based at the University of Miami in Florida at the time of the study. Florida is an angling hotspot and especially popular for shark fishing. So Shiffman's team sought to gather data on the practices of land-based anglers in the state — those who fish from beaches or piers rather than from boats.

The team downloaded entries posted between 2009 and 2015 on the South Florida Shark Club, a large Internet discussion board where anglers share advice and photos of their catches. “It’s a low-cost, logistically simple way to get observational data,” says Shiffman. The study is published in Fisheries Research1.

The researchers counted posts that mentioned certain species, conservation issues, fishing techniques and opinions of other anglers. They also used messages with images featuring identifiable sharks to estimate the number of endangered species being caught. “Recreational fishermen are, in general, infamous for exaggerating,” says Shiffman.

In all, the researchers found 1,527 reported shark catches. Of those, 620 were from protected species, such as lemon sharks (Negaprion brevirostris).

Florida state law says that accidentally caught endangered fish must be released immediately and not removed from the water. If sharks are pulled over beaches, for instance, it can kill them or damage their delicate eyes and gills.

The team also noted that even after tiger sharks (Galeocerdo cuvier) and hammerhead sharks (Sphyrna sp.) were added to Florida’s protected-species list in 2012, there was no significant drop in users admitting to catching them. “For a scientist it’s easy for that to seem callous or bull-headed,” says Catherine MacDonald a PhD student at the University of Miami and a co-author of the study.

But some forum users expressed concern for shark populations and knowledge that certain handling techniques are safer than others. “We encourage everyone to safely release tiger sharks and hammerhead sharks back into the wild,” wrote one poster. (Identities were anonymized as part of the data collection.)

Many saw declines in local populations as the fault of commercial fisheries. “Undoubtedly the root of shark declines is commercial fishing,” says MacDonald. “But in the present moment that probably isn’t the central challenge for sharks in Florida.”

The work is a good starting point, says Andy Danylchuk, who studies fish conservation at the University of Massachusetts Amherst. But he thinks the approach needs to be repeated with other forums before broad conclusions about attitudes and practices can be drawn. “Not all recreational anglers are the same.”

“There’s no way to extrapolate to the wider population of anglers because it’s voluntary, self-reporting,” agrees Shiffman. “It tells you, ‘This is here, this is happening.’”

Cooke says there is room for a variety of methods to track the activity. “It could be done with video cameras and binoculars, or looking at message boards or video-sharing sites.”

Ultimately, the study is “trying to shine a light on a large-scale, community-wide problem”, says Shiffman. “If I were to monitor this population through more traditional methods,” he adds, “I would need to be doing it for years.”

This article has been amended to note that lead author David Shiffman is now at Simon Fraser University in Vancouver.