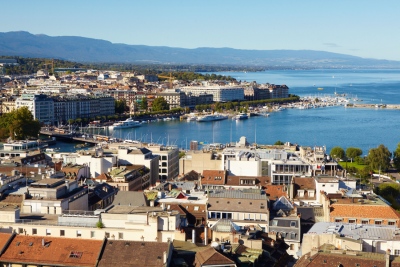 The Swiss city of Geneva could be at risk of flooding should a major rock fall trigger a tsunami on Lake Geneva, as seems to have happened in ad 563.

In ad 563, more than a century after the Romans gave up control of what is now Geneva, Switzerland, a deadly tsunami on Lake Geneva poured over the city walls. Originating from a rock fall where the River Rhône enters at the opposite end of the lake to Geneva, the tsunami destroyed surrounding villages, people and livestock, according to two known historical accounts.

Researchers now report the first geological evidence from the lake to support these ancient accounts. The findings,  published online in Nature Geoscience, suggest that the region would be wise to evaluate the risk today, with more than one million inhabitants living on the lake's shores, including 200,000 people in Geneva alone1.

“It’s certainly happened before and I think we can expect that it will probably happen again sometime,” says geologist Guy Simpson, from the University of Geneva, one of the researchers behind the project.

The team found the evidence while creating high-resolution profiles of the sediment composition of Lake Geneva using seismic reflection from a ship. The technique is similar to sonar, but uses seismic waves that penetrate and reflect off sediment layers.

The seismic profiles showed a “very strange and very different layer” that had been deposited in a single event in the Lake Geneva sediments, says geologist Stéphanie Girardclos, one of the research team. The unusual layer was lens-shaped, averaging five metres thick and covering 50 square kilometres. Girardclos knew of the accounts of the ad 563 rock fall and tsunami, known as the Tauredunum event, and thought that this might be evidence of its existence.

Sediment cores collected from the bottom of the lake showed that the deposition happened some time between ad 381 and ad 612. As the only major natural event described around that time, Tauredunum seemed a logical match.

The researchers cannot say exactly what created the tsunami (nothing suggests it was an earthquake), but they propose that the falling rock caused an accumulated heap of sediment in the Rhône delta to collapse. This would have launched the wave and carried the sediment from the delta to the centre of the lake, where the researchers detected it. 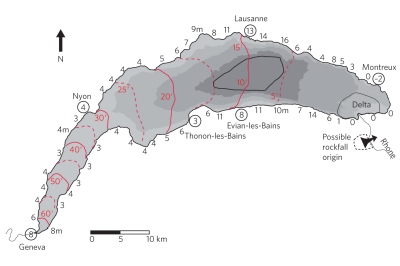 Simpson used the geological information gathered in the study to recreate how the wave might have behaved. His model predicted that a 13-metre-high wave would have hit Lausanne 15 minutes after the rock fall, with an 8-metre-high wave reaching Geneva after 70 minutes.

The team’s survey shows that other large sediment-deposition events occurred in Lake Geneva in the past 10,000 years. Further analysis of deeper cores should allow the team to learn more about the size and frequency of these events, and whether they were big enough to generate tsunamis, Simpson says. This could help to assess the risk to modern Geneva and other lakeside communities.

“There are many, many more people living around the lake than in the past,” Girardclos notes. Fluctuating lake levels in the past also caused people to live farther away from the water’s edge than they do now, she adds. The question is on what timeline and what will be threatened if it does happen again.

Tsunami experts say that a more detailed risk assessment would help to make the threat clearer, including a survey of the stability of the surrounding slopes and more refined models for how a tsunami would affect modern Geneva, for example.

“The risk posed by lake tsunamis has been underestimated in the past,” says tsunami sedimentologist Max Engel of the University of Cologne in Germany. Lakes with similar geological characteristics, such as Switzerland's Lake Lucerne, are at risk of similar events, he adds.