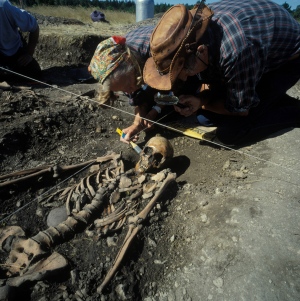 Neolithic Swedish hunter-gatherers had DNA like that of modern Scandinavians — but a farmer whose genome has been sequenced came from elsewhere.

Geneticists analysing DNA from Neolithic burial sites in Sweden have made a surprising discovery. The genetic make-up of one individual — a female farmer known as Gök4 — bears a startling similarity to that of modern-day Mediterraneans. And the woman's genome provides clues as to how agriculture spread across Europe.

“The farmer is most genetically similar to people living in Cyprus and Sardinia today,” says Pontus Skoglund, an evolutionary geneticist at Uppsala University in Sweden and the lead author of the study, which is published today in Science1.

Gök4's 5,000-year-old remains were found in Gökhem parish, southern Sweden. The discovery of her ancestry feeds into a long-running debate over the transition from foraging to farming in prehistoric Europe, a process that archaeologists refer to as Neolithization.

It is well established that agriculture had its origins in the near east, but there are still plenty of questions about how it spread. In particular, did resident hunter-gatherers independently hit on the idea of agriculture, learn about it through word of mouth or become introduced to it through the movement of people with farming know-how from south to north?

Efforts to address this question by sequencing the mitochondrial DNA and Y-chromosomes of modern Europeans have proved inconclusive2. In recent years, researchers have also been studying mitochondrial DNA from prehistoric specimens3–5. They have found tentative support for the idea that agriculture spread across Europe through migration rather than word of mouth, but their conclusions are based on analyses of only a single piece of DNA from each specimen, so they are open to question.

To get a more reliable snapshot, Skoglund and his colleagues sequenced almost 250 million base pairs from the skeletal remains of four individuals: Gök4 and three hunter-gatherers from around the same period, whose burial sites were located less than 400 kilometres from Västergötland, on the island of Gotland.

The hunter-gatherers show the greatest similarity to modern-day Finns, says Skoglund. “It was a surprise that the farmer and hunter-gatherers were so different. Scandinavia was clearly home to people of very different genetic backgrounds even 5,000 years ago,” he says.

Farming on the move

The result is strong evidence for the migration hypothesis. "If farming had spread solely as a cultural process, we would not expect to see a farmer in the north with such genetic affinity to southern populations,” says Skoglund.

But Wolfgang Haak, a human palaeobiologist at the University of Adelaide in Australia and a co-author of some of the mitochondrial studies, says that “one farmer from Scandinavia is certainly not enough to explain the spread of farming in places like Spain or Bulgaria and we definitely need more farmers from other parts of Europe”.

Another ancient DNA study, published this week in PLoS One6, compares the mitochondrial DNA of Neolithic farmers and hunter-gatherers in northern Spain. The genetic variation amongst the farmers indicates that there was a complex pattern of settlement, with waves of colonization bringing small and different Neolithic groups into the region.

“Given the genetic evidence from studies of both modern-day and ancient DNA, I am convinced that farmers expanded in many different ways and under many different demographic scenarios,” says Haak. But Skoglund's study adds “an important piece to the big puzzle” of how farming became commonplace across Europe, Haak adds.

It is also an exciting indication of the direction the field is taking, he says. Earlier this year, researchers published a near-complete genomic sequence from Ötzi, the Neolithic mummy found in ice in the Alps in 1991, which revealed that he had also probably come from Mediterranean stock7. “The technical advances in the genomic era now provide us with the necessary tools to tackle the different modes of the Neolithization in every corner of Europe with much higher precision,” says Haak.

There is also the tantalizing prospect that as understanding of the genetic basis of behaviour improves, it might be possible to comb fragments of ancient DNA for signs of behavioural differences between prehistoric populations. “In the future we might know a few genes that affect behaviour and we could go back and look into the hunter gatherers and see what variants of those genes are present,” says Mattias Jakobsson, a population geneticist at the University of Uppsala and a co-author of the Science paper. “But that’s not going to happen in the next couple of weeks at least.”