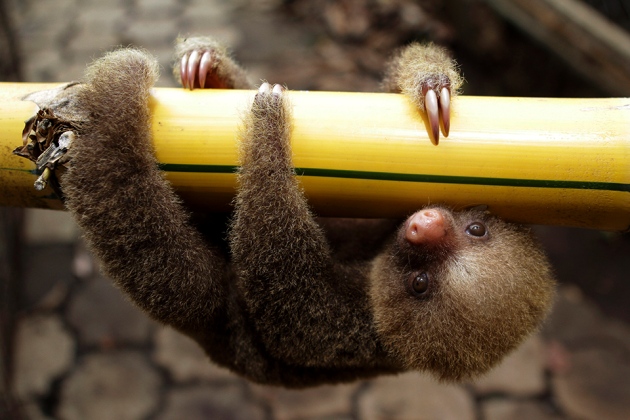 Retroviruses infect a diverse range of animals, from amphibians to fish, and even mammals such as sloths.

The finding, which is based on an analysis published on 10 January in Nature Communications1, indicates that retroviruses moved with their vertebrate hosts from the ocean to dry land. Using new mathematical techniques to calculate the age of an ancient line of retroviruses called foamy viruses, which infect species ranging from lemurs to fish, the researchers worked out that retroviruses first evolved between 460 million and 550 million years ago.

“These viruses are as old as vertebrates themselves, older than any other viruses we know about,” says study co-author Aris Katzourakis, a palaeovirologist at the University of Oxford, UK.

Until now, scientists didn’t have the tools to calculate the age of viruses as ancient as this, because the natural accumulation of mutations in the viral genes clouded the micro-organisms’ early history.

“You can see rapid evolution in retroviruses over short time frames, but this is new evidence that they’ve been around for hundreds of millions of years,” says Michael Worobey, an evolutionary virologist at the University of Arizona in Tucson. “We’re up against the limits of our ability to determine their age.”

Many viruses insert copies of their genome into their host’s DNA, and retroviruses are particularly adept at doing this. If hosts pass on the viral genome to their offspring, the virus has effectively become a part of the animal’s genetic code and can be passed down through time. Scientists have sequenced an increasing number of animal genomes, discovering ever more of these kinds of retrovirus. About 8% of the human genome consists of retroviral elements, although random mutations have rendered many of them inert.

Katzourakis had previously established that retroviruses have been infecting mammals for at least 100 million years2, and a study published in 2012 hinted that they could be even older3. To settle this question, he turned to foamy viruses. Named for their ability to make infected cultured cells look as if they were soaking in a bubble bath, foamy viruses infect animals from very different lineages. This makes these viruses ideal for studying the ancient history of retroviruses, because their history could be investigated in multiple groups of animals through the traces of their genes in their hosts’ genomes.

Normally, scientists construct an evolutionary tree by using mutation rates to calculate when two organisms last shared a common ancestor. More mutations mean a longer time since two species diverged. But Katzourakis hit a wall when he tried this for foamy-virus sequences from 36 reptile and amphibian lineages, whose ancestors were probably the first animals infected by retroviruses.

When scientists studied viral evolution over longer time spans, they noticed that the mathematical formulae they had been using to calculate mutation rates made virus evolution look as if it had slowed down. In reality, the viruses evolve at roughly the same rate over any time period. So Katzourakis created a mathematical formula that helped him to account for this apparent difference in evolutionary rates of viral genes in deep time. This analysis allowed Katzourakis and his co-author, Pakorn Aiewsakun, a palaeovirologist at the University of Oxford, to extend the age of retroviruses back to when animals emerged from the ocean onto land.

Michael Emerman, a retrovirologist at the Fred Hutchinson Cancer Research Center in Seattle, Washington, says that understanding the retroviruses locked in animal genomes is essential for understanding not only the evolution of viruses but also that of vertebrates.

Comparing the various viruses in the genomes of different species can tell researchers more about when new species emerged. “It’s a really nice paper that uses the fact that almost every animal has a retrovirus, and their evolution occurred with these viruses,” he says. “You can’t consider the evolution of a species without the evolution of their pathogens.”