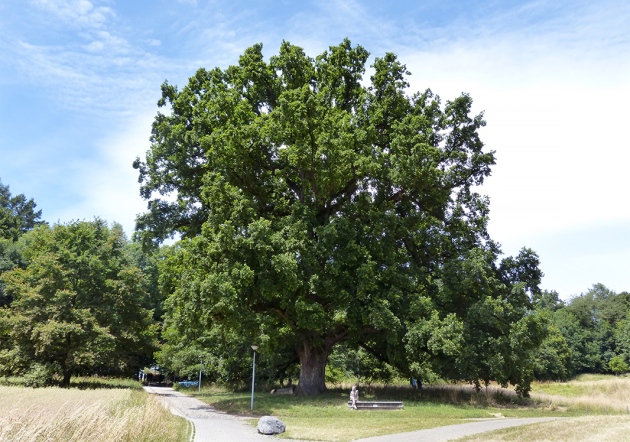 The 'Napoleon' oak has few single-letter mutations in its genome.

The towering 234-year-old 'Napoleon' oak on the campus of the University of Lausanne in Switzerland has weathered storms both meteorological and political. The tree was young when Napoleon’s troops passed through town in 1800, and has grown into a majestic city landmark. But through it all, its genome has remained largely — and surprisingly — unchanged.

Researchers at the university discovered this unexpected stability after sequencing the genome in different branches of the tree. Their work — posted on 13 June as a bioRxiv preprint, which has not been peer reviewed — meshes with a growing body of evidence that plants are able to shield their stem cells from mutations1. The practice may be valuable for sustaining their health over a lifespan that can reach hundreds of years.

“If you just accumulate more and more mutations, you would eventually die of mutational meltdown,” says Cris Kuhlemeier, a developmental biologist at the University of Bern in Switzerland.

Each time a cell divides, mutations can arise because of errors made while copying the genome. Animals shield their reproductive cells from these mutations by isolating them early in development. These cells, called the germline, then follow a different developmental path, and typically have a low rate of cell division.

But plants do not have a dedicated germline: the cluster of stem cells that gives rise to the reproductive parts of flowers also generates plant stems and leaves. Because of this, scientists thought that the stem cells would accumulate many mutations, and that newer branches at the top of a long-lived tree would be remarkably different from the lower branches.

Plant biologist Philippe Reymond and his team at the University of Lausanne decided to test this hypothesis using the university’s prized oak tree. They sequenced the genome from leaves on lower, older branches and upper, younger ones, and tallied the number of single-letter changes they found in the tree's DNA. (Reymond declined to be interviewed by Nature because the paper is currently under review at a scientific journal.)

The team found that the number of mutations was much lower than would be expected based on calculations of the number of cell divisions that occurred between the lower branch and the higher one.

“It’s a tantalizing study,” says Daniel Schoen, a plant evolutionary biologist at McGill University in Montreal, Canada. “It touches on something that was simmering always, in the back of the minds of plant biologists.”

It is too soon to say how general this phenomenon will be in plants, cautions Karel Říha, a plant geneticist at the Central European Institute of Technology in Brno, Czech Republic. The researchers also looked only at one kind of genetic change — single-letter changes to the sequence — and did not evaluate other kinds of mutations, such as deleted DNA.

Mao-Lun Weng, a plant evolutionary biologist at South Dakota State University in Brookings, notes that the team used a stringent filter to weed out background noise in the sequencing data, and may have inadvertently missed some mutations as a result.

This could mean that some mutations were left out of the analysis. But Říha and Weng are quick to note that the results are in line with two studies published last year. In the first2, led by Kuhlemeier, researchers tracked individual stem-cell divisions in the growth region of plants called the meristem. They found that in tomato and thale cress (Arabidopsis), the meristem contains a set of three or four cells that are set aside and divide much less often than the other cells in the region. The other study3, led by Říha, also found few mutations between old and new leaves in thale cress.

For Kuhlemeier, the results provide an answer to a question that has troubled him ever since a trip to Oregon 20 years ago. As he looked up at a soaring, 400-year-old Douglas fir, Kuhlemeier wondered how the branches towards the top of the tree would differ from those at the bottom. “I had always thought of a tree not as an organism, but as a collection of organisms with different genomes — more like a colony,” he says. Many ecologists shared his view, but now he has begun to question his earlier idea.

A clearer picture of plant development could help breeders as they increasingly focus on long-lived, perennial plants, says Schoen. “If, as plants age, there is this mutation accumulation that could impact vigour, we would want to know about it,” he says. “We need more information of this type.”