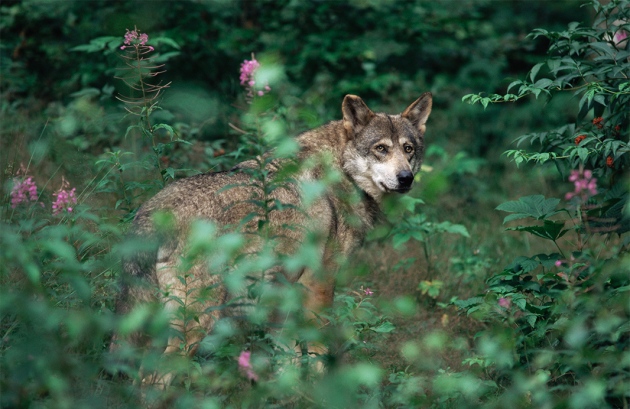 Wolves are the ancestors of dogs, but researchers can't agree on when the canines were first domesticated.

Researchers chasing the origin of modern dogs find that canines were domesticated once, between 20,000 and 40,000 years ago.

The results, published on 18 July in Nature Communications1, push back against a controversial 2016 study2 that suggested dogs were domesticated twice. The latest analysis also add weight to previous research that moves the timing of domestication back as far as 40,000 years ago.

Everyone has their own idea about where and when dogs originated, says Krishna Veeramah, a palaeogeneticist at Stony Brook University in New York and an author on the latest study. “Archaeologists suggest one and geneticists suggest another — people are always getting very different answers.”

Zeroing in on a precise time and location for dog domestication has long been challenging because of seemingly contradictory or incomplete evidence. A 14,700-year-old jawbone is the oldest undisputed fossil from a domesticated dog (Canis lupus familiaris), but dog-like remains date back as far as 35,000 years ago. Genetic data show that the ancestors of all modern dogs split into two populations: one that gave rise to East Asian breeds and another that would become modern European, South Asian, Central Asian and African dogs. Yet researchers still can’t pin down when this split occurred. And they can’t agree on whether dogs were domesticated once or twice.

The latest research offers a little clarity on the timing of domestication and on the dual or single origin question. Veeramah and his colleagues studied genomes from Neolithic dog fossils found in different parts of Germany — one from the start of the period, 7,000 years ago, and one from 4,700 years ago. They also looked at data from a 5,000-year-old dog specimen found in Ireland. The team then compared these ancient genome sequences with genetic data from 5,649 canids, including modern dogs and wolves.

The researchers estimate that dogs and wolves diverged genetically between 36,900 and 41,500 years ago, and that eastern and western dogs split 17,500–23,900 years ago. Because domestication had to have happened between those events, the team puts it somewhere from 20,000 to 40,000 years ago. 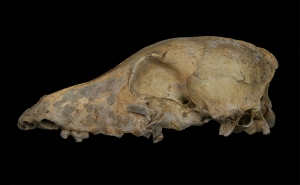 A 5,000-year-old dog skull from Ireland that was analysed for the study.

These dates challenge the need for a dual-origin domestication explanation suggested in a 2016 study published in Science2. That work compared genetic sequences from 59 ancient dogs, as well as a Neolithic canine from Ireland, and pegged the split between eastern and western dogs between 6,400 and 14,000 years ago. The team suggested that because the split occurred thousands of years after the first known appearance of dogs in Europe and East Asia, there must have been two instances of domestication that happened around the same time.

“We really don’t know where dogs were domesticated and as far as we can tell it happened once,” says Pontus Skoglund, a geneticist at Harvard Medical School in Boston, Massachusetts, who has worked to pin down when dogs were first domesticated but was not involved in either study.

The authors of the latest work acknowledge that their study won’t settle the debate over when and where man’s best friend originated. “More ancient dog DNA from genomes will ultimately solve the problem,” Veeramah says.

“If we can add in other ancient samples from all around the world, it'll give us a more comprehensive picture of population history and likely dog origins,” says Adam Boyko, a geneticist at Cornell University in Ithaca, New York. But we need diverse samples not just geographically, but also through time, says Boyko, who is compiling a modern dog genetic database from canines all over the world.

Veeramah, whose research focuses mainly on ancient humans, says that learning more about the origins of modern dogs can inform his work on people. “Dogs and humans have an important history together,” he says.