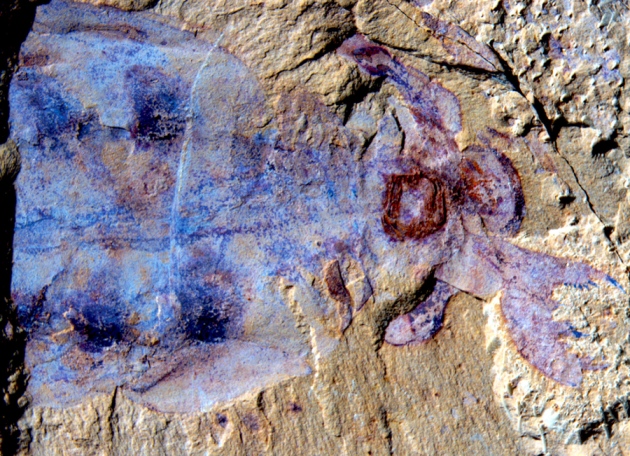 This fossilised anomalocaridid is more than half a billion years old, but its neural structures — highlighted in blue using a digital filter — are surprisingly similar to those of certain invertebrates alive today.

One could be forgiven for mistaking anomalocaridids for creatures from another world. The spade-shaped predators, which lived in the seas during the Cambrian — the geological era stretching from 541 million to 485 million years ago — had eyes that protruded from stalks and a pair of giant appendages on the sides of their mouths. But three stunningly well-preserved fossils found in China now show that the anomalocaridid brain was wired much like that of modern creatures called velvet worms, or onychophorans.

Both anomalocaridids and onychophorans belong to the arthropods, the group of invertebrates that includes spiders and insects and whose brain structures come in three main types. Two of those were already known to be very ancient, and the new fossils, described today in Nature1, suggest that the third type — the neural architecture found in onychophorans — also has changed little over more than half a billion years of evolution.

Named Lyrarapax unguispinus, the three fossils reveal creatures that — at 8 centimetres long — are on the small side for anomalocaridids, some of which are thought to have been as long as 2 to 3 metres. But the fossils’ segmented bodies and frontal appendages are pure anomalocaridid, says Nicholas Strausfeld, a neuroscientist at the University of Arizona in Tucson, who co-led the study.

What really grabbed Strausfeld’s attention was the creature’s brain, preserved flattened like a pressed flower: “I said, ‘Holy shit, that’s an onychophoran brain!’” he recalls. The animal’s frontal appendages are connected to nerve bundles, or ganglia, in front of optic nerves. Both the ganglia and the optic nerves lead to a segmented brain. The layout is an uncanny match to the wiring of the velvet worm’s brain, Strausfeld says: “It’s completely unlike anything else in any other arthropod.” 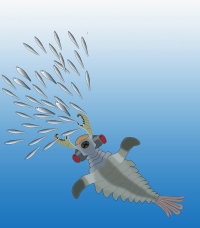 An artist's impression of Lyararapax chasing its possible prey — primitive fishes that also lived in the Cambrian.

The fossils solve a couple of evolutionary mysteries, Strausfeld adds. First, they suggest that the anomalocaridid’s frontal appendages are analogous to the mouthparts, or labra, of arthropods. The fossils, along with two other creatures discovered by Strausfeld and his team2, 3, also show that the three main kinds of arthropod brains have been around for more than 500 million years, even as their bodies changed drastically.

As top predators of their age, anomalocaridids may have spurred the evolution of the more sophisticated brains of the other arthropods they preyed upon, even though their nervous systems remained comparatively simple, Strausfeld says.“A predator that’s cruising around looking for prey doesn’t need to have a very complicated brain. It doesn’t have many enemies.”