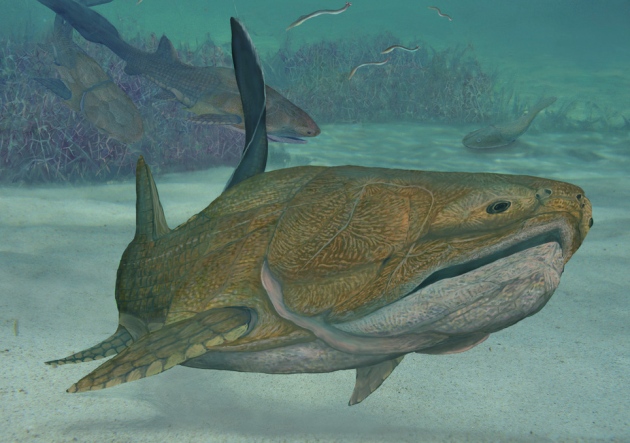 The newly described armoured fish showed in this reconstruction lived 419 million years ago but already had the bony jaw seen in modern fish and most other vertebrates.

It may be hard to see, but you seem to share a family resemblance with Entelognathus primordialis. The fish, which lived 419 million years ago in an area that is now part of China, is the earliest known species with a modern jaw.

Entelognathus primordialis is a new addition to the placoderms, a class of armour-plated fishes that lived from about 430 million to 360 million years ago. Like most vertebrates, including mammals, placoderms had a bony skull and jaw, but most of them had simple beak-like jaws built out of bone plates. Palaeontologists have traditionally believed that the fishes' features bore no relation to ours.

They assumed that the placoderm face was lost to evolutionary history, and most thought that the last common ancestor of living jawed vertebrates had no distinct jawbones — that it was similar to a shark, with a skeleton made mostly of cartilage and at most a covering of little bony plates. The theory went that the bony fishes evolved later, independently developing large facial bones and inventing the 'modern' jaw. Such fishes went on to dominate the seas and ultimately gave rise to land vertebrates.

But findings published today in Nature1 may turn that view on its head. Min Zhu, a palaeontologist at the Chinese Academy of Sciences' Institute of Vertebrate Paleontology and Paleoanthropology in Beijing, and his colleagues describe E. primordialis from a fossil that is much better preserved than most placoderms. It has what looks like a bony fish’s jaw, even though it is older than the earliest known sharks and bony fishes. 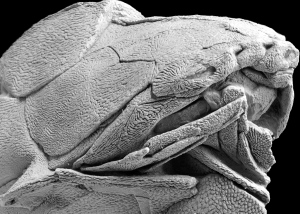 This detail of the fossil specimen shows armour plates and the upper and lower jaw (center-right).

Taking this into account, the authors revise the family tree of jawed vertebrates, showing that there is a serious possibility that the modern bony visage originated with E. primordialis’s ancestors. This would mean that humans look more like the last common ancestor of living jawed vertebrates than we thought, and that sharks are less primitive than palaeontologists assumed, having done away with their bones as an adaptation.

However, the rearranged family tree is not yet quite conclusive, write the authors of a related News & Views article. There remains a chance that E. primordialis evolved its jaw independently from the bony fish, so that we did not inherit it, and the resemblance is an illusion.